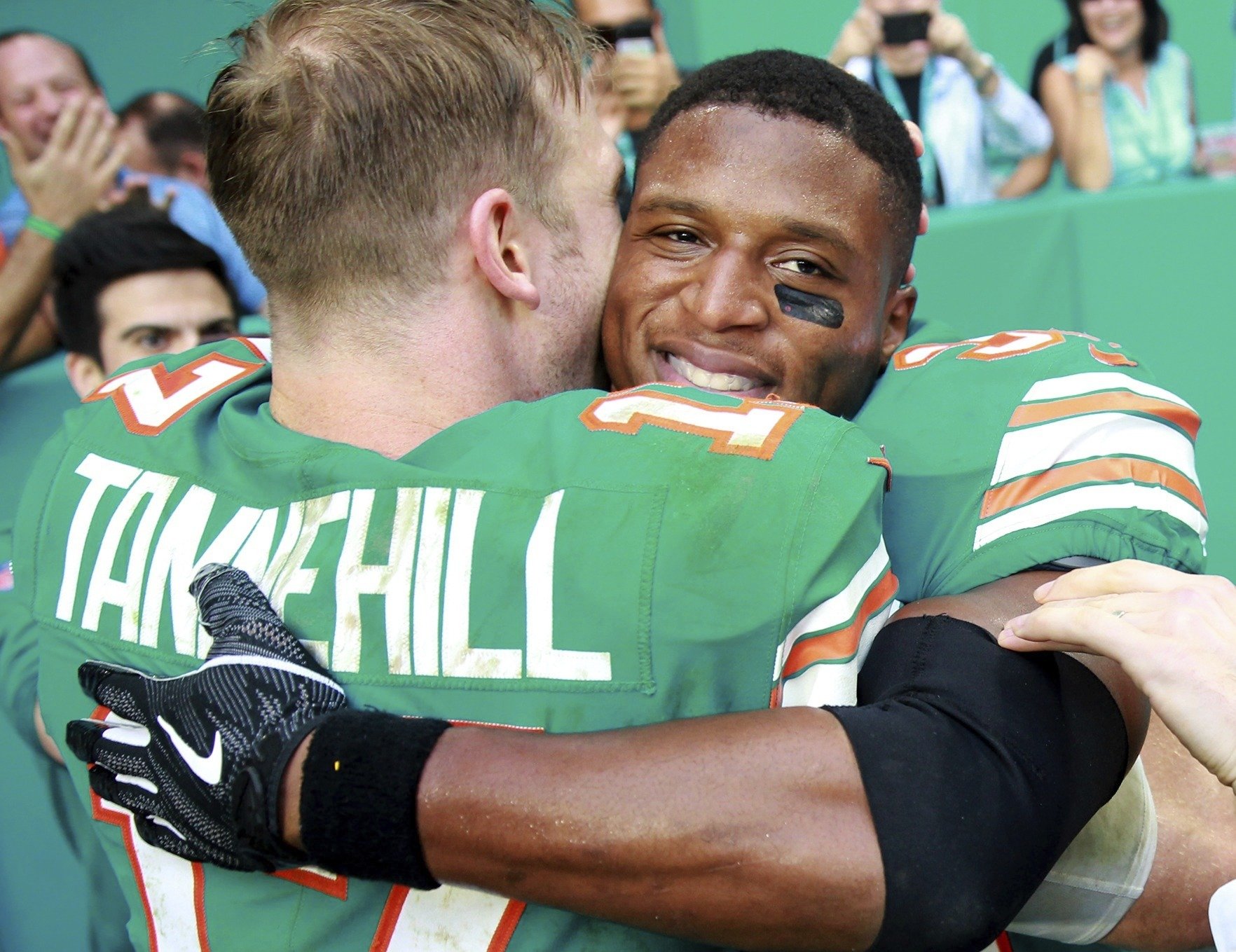 MIAMI GARDENS, Fla. — The celebratory mob scene in the corner of the end zone broke out far from Ryan Tannehill, leaving him in the open field, running and screaming as he waved his arms. Since he couldn’t find anyone to hug, he flopped to the grass on his back, the job done and the game won.

“I collapsed — just the emotion of the whole thing,” Tannehill said.

Sixteen seconds from defeat, Tannehill threw a short pass and then watched his teammates save the season with the “Drake Escape.”

Kenyan Drake ran the last 52 yards as the Dolphins scored on a pass and double lateral on the final play Sunday to beat the New England Patriots 34-33. With that, Miami lived up to its nickname — the Magic City.

“They just made one more play than we did,” Patriots coach Bill Belichick said.

And what a play. The Patriots were on the verge of clinching their 10th consecutive AFC East title when the Dolphins lined up at their 31 after a kickoff return trailing 33-28.

“We had them right where we wanted,” Tannehill said dryly. “Not really surprised with how things turned out.”

He threw a 14-yard pass to Kenny Stills, who lateraled to DeVante Parker, who quickly lateraled to Drake along the sideline. He cut toward the middle and found a seam, helped by a block from guard Ted Larsen at the 30.

Drake beat two Patriots to the corner of the end zone — defensive back J.C. Jackson and tight end Rob Gronkowski, who was on the field as part of New England’s prevent defense.

Then came one last pass to punctuate the play — Drake reared back for a celebratory heave into the stands as the Dolphins’ bench emptied and teammates swarmed him.

The Dolphins call the play “Boise” because it was borrowed from the Boise State playbook, and they had been working on it all year.

“You rep it in practice over and over,” receiver Kenny Stills said. “Sometimes it’s like, ‘Why are we doing this?’ And now we know why.”

It brought to mind other NFL last-second stunners, including Roger Staubach’s “Hail Mary”, the “Miracle in the Meadowlands” and the “Immaculate Reception”. The play was the longest from scrimmage to win a game with no time remaining in the fourth quarter since the 1970 merger.

Brady threw for 358 yards and three scores, but the stunned Patriots (9-4) lost in Miami for the fifth time in their past six visits. The Dolphins (7-6) came from behind five times to help their slim wild-card chances.

“We’re playing one week at a time right now,” Miami coach Adam Gase said. “Any loss could be the end.”

The Patriots’ Stephen Gostkowski missed an extra point for the first time in 38 tries this season early in the game, and also missed a 42-yard field goal try. But his 32-yarder to cap a 55-yard drive put the Patriots ahead 30-28 with 6:45 left.

Belichick opted to have Gostkowski kick a 22-yarder in the closing seconds rather than pin the Dolphins near their goal line. Instead, Miami returned the ensuing kickoff to the 31 — and on the next play pulled off a miracle.

Brady broke the NFL record for career touchdown passes including postseason and now has 582, three more than Peyton Manning. His scores covered 2 yards to Julian Edelman, 37 to Cordarrelle Patterson and 16 to Gronkowski .

Tannehill missed two plays at the end of the first half after a teammate stepped on his right foot . He returned to start the second half, and his 23-yard touchdown pass to Brice Butler put the Dolphins ahead 28-27 late in the third quarter.

But they managed only three first downs and no points thereafter — until the final play.

The teams swapped touchdowns and the lead for five consecutive possessions in the second quarter over an entertaining span covering less than 11 minutes.

Miami’s fourth-string running back Brandon Bolden, who spent six years with the Patriots, scored untouched on a career-long 54-yard run up the middle, and added a 6-yard scoring run.

The Patriots squandered a scoring chance at the end of the first half. With 14 seconds left and no timeouts, Brady took the snap at the Miami 2, and when he was sacked by Robert Quinn the clock ran out, leaving the Patriots with a 27-21 lead.

X-rays of Tannehill’s right ankle were negative, but he acknowledged it didn’t feel good after the game. “I rolled it pretty good,” he said. “Got X-rays and buttoned it up tight.”

Tannehill finished 14 for 19 for 265 yards, three scores and no turnovers. He has won nine consecutive home starts.