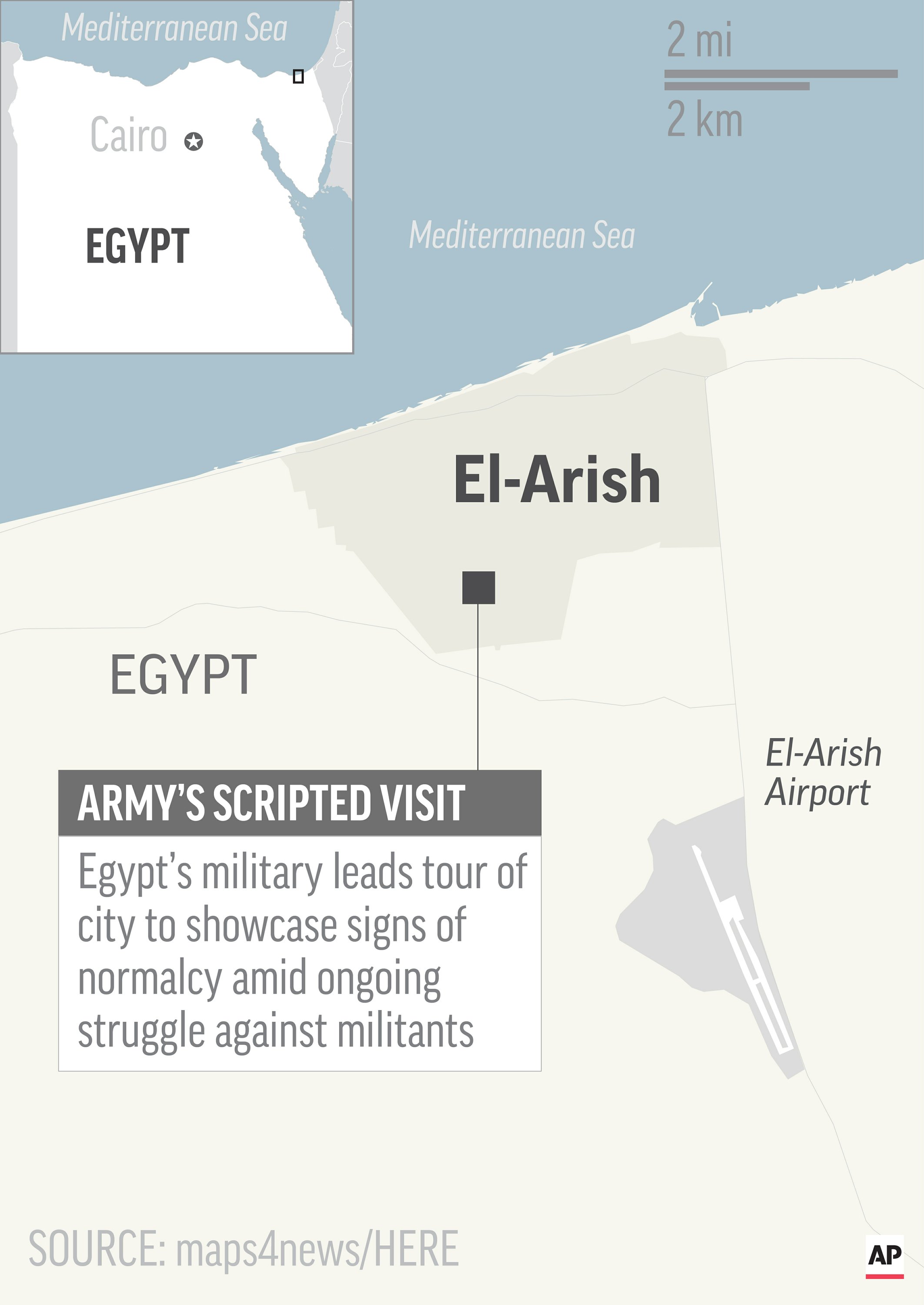 EL ARISH, Egypt — Mohammed Amer Shaaban stood over trays of fresh fish at his tiny store in the coastal Sinai Peninsula city of el-Arish, pointing to his right and left while recalling the tough days when Islamic State militants operated with impunity.

“They killed a Christian who owns a knife shop there and an informant over there. They also killed one of my cousins,” he said.

“We have enjoyed some stability and peace for the past six or seven months,” added the 48-year-old father of five as some two dozen journalists descended on el-Arish’s fish market as part of a rare, army-organized trip.

The trip was chiefly designed to show off signs of normalcy in el-Arish, northern Sinai’s largest city, as evidence that the military’s all-out offensive against militants launched nearly 10 months ago has succeeded.

But in the city and the surrounding deserts, the signs of war are difficult to miss, particularly the enormous security presence. The Associated Press was required to submit the photos and video accompanying this story to Egypt’s military censor, which did not say two weeks after submission if or when the material would be released.

The carefully scripted trip included visits to an indoor arena packed with thousands of screaming schoolchildren, a new housing project, a school and a factory. No one is claiming the militants have been defeated, but there have been no major attacks for several months, save a recent ambush of buses carrying Christian pilgrims to a remote desert monastery south of Cairo that left seven dead.

The fight against militants in Sinai has gone on for years, but the insurgency gathered steam after the 2013 ouster by the military of a freely elected but divisive president, the Islamist Mohammed Morsi of the Muslim Brotherhood. Authorities have since shut down almost all underground tunnels that they suspected militants used to smuggle fighters and weapons into Sinai from neighboring Gaza, ruled by the Islamist Hamas group since 2007.

A brutal militant attack on a Sinai mosque that killed more than 300 worshippers a year ago — the deadliest such attack in Egypt in living memory — prompted general-turned-president Abdel-Fattah el-Sissi to order a major offensive.

The operation, with thousands of troops backed by tanks, jet-fighters and warships, got underway in February. Security forces almost completely sealed off northern Sinai, causing shortages of food and fuel. The siege was eased in May, allowing normalcy to gradually return to the mostly desert region, especially in el-Arish.

Barely a year ago, militants in el-Arish killed suspected informants in broad daylight, set up bogus checkpoints, shot Christians in their stores, snatched clerics and members of the security forces to later dump their bodies on the streets. Now traffic is heavy, families are out in public, stores are filled with goods, and school classes are packed with children.

The military is eager to tout the changes.

“Terrorism will be completely defeated in a matter of a few months,” announced Mohammed Abdel-Fadeel Shoushah, a retired general who serves as the governor of northern Sinai. “Now we are focusing on development, which is the basis of security.”

For now, though, el-Arish shows enduring signs of conflict.

A Pharaonic-style building across the road from the governor’s heavily guarded office has almost every one of its windows shattered. Some streets are blocked by sand berms, while others are sealed off by concrete blocks. Unfinished buildings are everywhere in the city, parts of which look deserted. Many of the date palms in the city look like they have received little care for years.

Authorities are building a wall around the city’s airport after militants last December rocketed a helicopter used by the then defense and interior ministers while parked on the tarmac. The ministers were unharmed, but one officer was killed in the attack.

Another wall with heavily fortified watch towers is being built on the southern reaches of the city to prevent militants from infiltrating through dense olive orchards.

The pervasive security, and the great lengths to which the military went to protect the journalists, suggest danger may not be far away. The reporters traveled in armored cars with gunners in full combat gear perched atop, and a signal-jamming vehicle tagged along as a precaution against roadside bombs. The top officials in the convoy were protected by heavily armed policemen in black fatigues and ski masks.

“Stay put in the vehicle and don’t come out and wander around,” an armed plainclothes police officer sternly warned reporters during one stop. “It is not as safe as you might think,” he said, pointing to the expanse of desert on one side of the road.

The magnitude of the counterterrorism task becomes apparent during the nearly 200-kilometer (125-mile) journey through the desert from the east bank of the Suez Canal to el-Arish.

All along the road are military positions. At some, tanks are buried in the sand for protection with only their turrets showing. Soldiers on watch towers in the middle of nowhere cut forlorn figures against a backdrop of desert. The checkpoints create long lines of vehicles. Helicopters occasionally hover above.

El-Arish resident Hassan Mahdi, a lawyer who came to Sinai from a Nile Delta province as a young boy nearly 30 years ago, said the restored security is a welcome change.

“To be honest, life was very, very difficult here,” he said. “Businesses were relocating out of Sinai in search of security and many things were in short supply. Not anymore.”