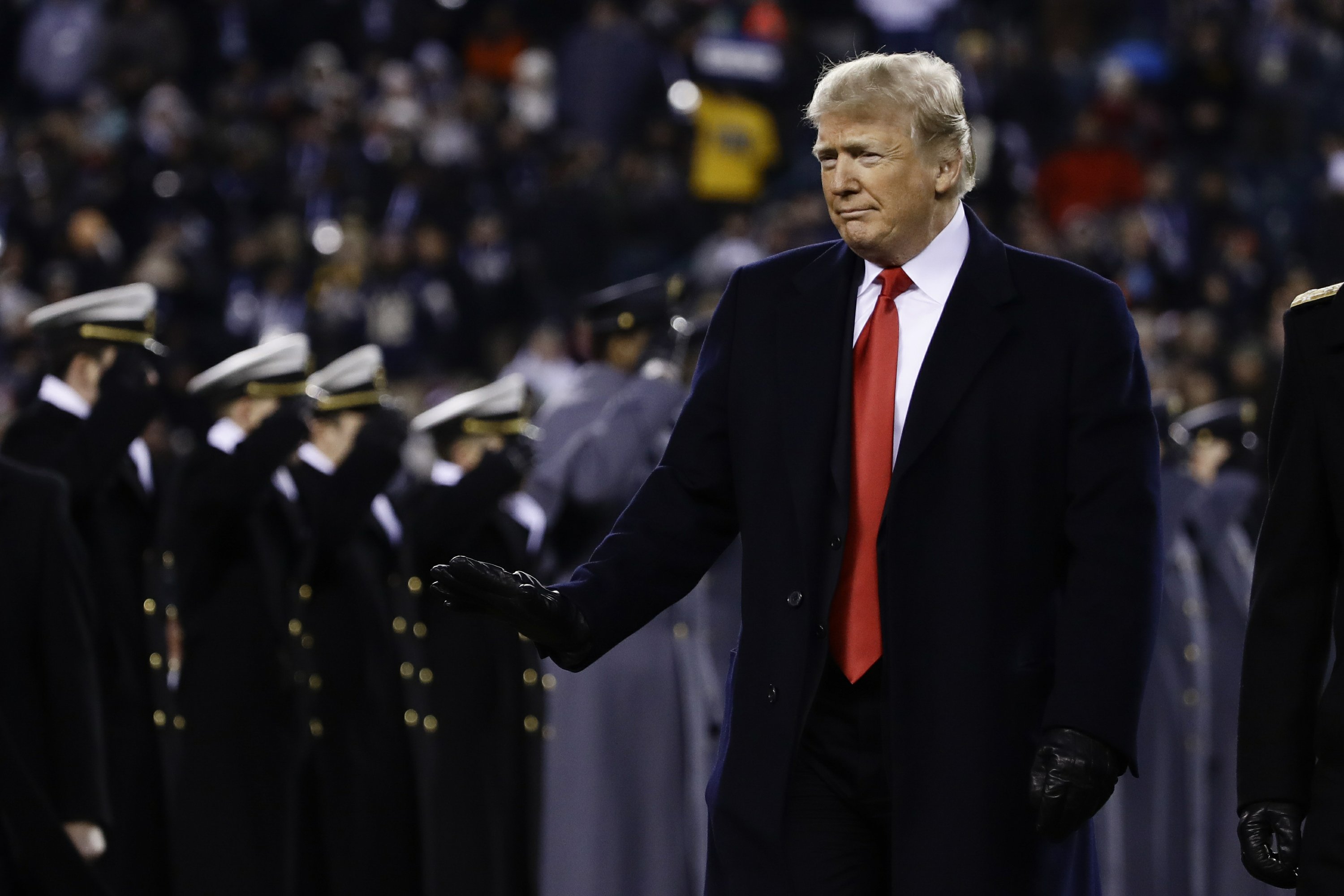 WASHINGTON — President Donald Trump is facing escalating criminal investigations in Washington and New York that are examining not only whether his campaign coordinated with the Kremlin but also whether he illegally bought the silence of two women who say they had sex with him.

A look at the nearly three dozen people charged by special counsel Robert Mueller and unanswered questions about what may lie ahead for the president — labeled “Individual-1” in court papers — and his administration:

And prosecutors are preparing for the sentencing hearing next week of former national security adviser Michael Flynn, who lied to the FBI about his Russian contacts.
___

— Did the Trump campaign collude with Russia?

That remains unclear, though there is mounting evidence of direct contact throughout the campaign between Trump associates and Moscow and evidence that individuals in Trump’s orbit were discussing a possible email dump from WikiLeaks before it occurred.

American intelligence agencies and Mueller have said Russia was the source of hacked material released by WikiLeaks during the campaign that damaged Democrat Hillary Clinton’s presidential effort.

Additional ties between Russians and Trump aides were alleged within the last week. Prosecutors revealed that a Russian contacted Cohen in 2015 and offered “political synergy” between Russia and the Republican campaign. A person familiar with the matter confirmed that that person is a former Russian Olympic athlete named Dmitry Klokov.

Trump and his lawyers have returned a list of written answers on the collusion question to Mueller, but it’s unclear whether investigators will return with more questions.

— Did the president obstruct the investigation?

That is another unresolved question that Mueller is pursuing. Investigators have examined key episodes such as Trump’s firing of former FBI Director James Comey and his fury over the recusal from the investigation of former Attorney General Jeff Sessions.
___

— Paul Manafort: He has been convicted in Washington and Virginia of crimes related to years of Ukrainian political consulting work, including allegations he concealed his foreign government work from the United States and failed to pay taxes on it. Although the charges don’t directly touch Trump, he’s nonetheless remained a figure of considerable intrigue and enjoys the continued sympathy of the president, who has left open the door for a pardon.

— Rick Gates: The longtime associate of Manafort and key Trump campaign aide was indicted last year alongside his mentor but months later split from him by pleading guilty to unregistered foreign lobbying work and agreeing to cooperate with Mueller. No sentencing date has been scheduled for Gates, indicating that his cooperation with investigators is continuing.

— Michael Flynn: He has admitted lying to the FBI just days after Trump took office by telling agents that he had never discussed sanctions with the-then Russian ambassador to the United States. The White House said Flynn had misled administration officials, including Vice President Mike Pence, about the conversation and ousted him weeks later. He’s since become a vital cooperator for Mueller, having met 19 times with investigators. Prosecutors aren’t recommending any prison time when he’s sentenced next week.

— Michael Cohen: He’s at the center of not only Mueller’s investigation but also a separate investigation into hush-money payments. In Mueller’s investigation, Cohen has admitted lying to Congress about a proposed real estate development in Moscow. He told lawmakers the negotiations were done in January 2016 when in fact they stretched deep into the campaign. He also pleaded guilty in New York to campaign finance violations stemming from the payments, with prosecutors saying he “acted in coordination and at the direction of Individual-1” — Trump.

— George Papadopoulos: The former foreign policy adviser recently finished a 14-day prison sentence after admitting lying to the FBI about a 2016 conversation with a Maltese professor who told him Russia had “dirt” on Clinton in the form of emails.
___

— Twelve military intelligence officers were charged in July with hacking the email accounts of Clinton’s presidential campaign and the Democratic Party and then facilitating the release of tens of thousands of private communications. It remains perhaps the most direct example of what American intelligence officials say was a broad conspiracy by the Kremlin to meddle in the 2016 election on Trump’s behalf.

That indictment did not accuse any Americans of participating in the conspiracy, though it did include an eye-catching detail: The Russian hackers, prosecutors say, made an attempt to break into Clinton’s network just hours after Trump appeared to invite them to do so. In a July 27, 2016, speech, Trump urged Russia to look for emails that Clinton said she had deleted from her tenure as secretary of state.

— A separate indictment charges 13 Russians with using a covert social media propaganda campaign to sow discord among Americans in the run-up to the 2016 presidential election. Prosecutors say the scheme was run by a Russia-based troll farm that relied on bogus social media postings and advertisements fraudulently purchased in the name of Americans to try to influence the election.
___

— Konstantin Kilimnik: The Ukrainian native, who U.S. authorities say has ties to Russian intelligence, was indicted on obstruction of justice charges involving Manafort. The men are accused of trying to persuade two witnesses to lie about the nature of political consulting and lobbying work they carried out for Ukrainian interests.

— Richard Pinedo: The California man was sentenced in October to six months in prison for unwittingly aiding the Russian troll farm by selling stolen identifications and bank account numbers that were used by Russians to establish PayPal accounts and purchase advertisements on Facebook.

— Alex van der Zwaan: The Dutch attorney became the first person punished with prison in the Mueller investigation when he was given a monthlong sentence for lying to investigators about his contacts with Gates and Kilimnik and about a report prepared by his law firm about the trial of a former Ukrainian prime minister.
___

OTHER NAMES YOU MAY HAVE HEARD

— Roger Stone: The longtime Trump confidant and self-proclaimed “dirty trickster” of Republican politics has been under investigation for months as prosecutors try to establish what knowledge he may have had about plans by WikiLeaks to release the stolen Democratic emails in the weeks before the election. Although a 2016 Stone tweet — “Trust me, it will soon the Podesta’s time in the barrel” — appeared to presage the disclosure of hacked emails, Stone has said he had no inside knowledge about the content, source or timing of WikiLeaks’ disclosure.

— Jerome Corsi: A conspiracy theorist and Stone friend, he’s been under intense pressure from Mueller and even turned down a plea offer that would have required him to admit intentionally lying about a 2016 conversation he had with Stone about WikiLeaks. It’s unclear when or if he will be indicted, but based on draft documents Corsi has released, prosecutors appear to believe that he misled them about email exchanges involving Assange and the purloined emails.

— Julian Assange: Prosecutors in the Eastern District of Virginia inadvertently disclosed the existence of a sealed criminal complaint against the WikiLeaks founder, though no details have been publicly announced. Assange, under Justice Department scrutiny for years for WikiLeaks’ role in publishing government secrets, has been an important figure in the Mueller probe as investigators examine how WikiLeaks obtained the stolen emails and whether any Americans were involved in coordinating that effort.

— Donald Trump Jr.: The president’s eldest son has attracted scrutiny for his role in arranging a Trump Tower meeting in June 2016 — also attended by Manafort and Trump son-in-law Jared Kushner — at which he expected to receive damaging information on Clinton. He has said the meeting was a waste of time because he didn’t receive anything interesting from the attorney, Natalia Veselnitskaya. Both he and his father have suggested that anyone in that position would have taken the meeting in hopes of getting dirt on a political opponent. The meeting has been of interest to investigators, who have called multiple participants before the grand jury.