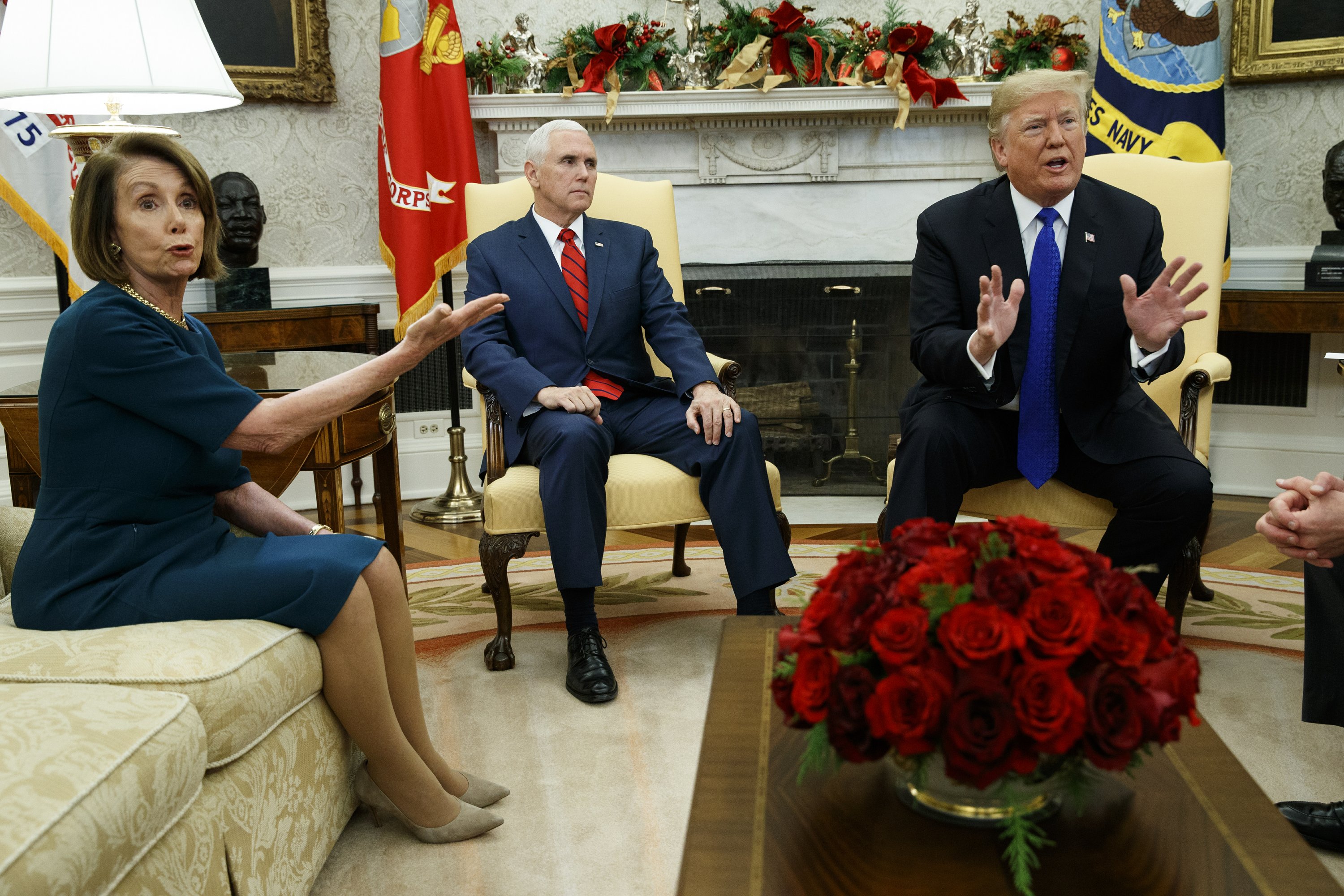 WASHINGTON — At the dawn of divided U.S. government, House Democratic leader Nancy Pelosi said Tuesday that President Donald Trump’s threat to shut down the government over a border wall is really about his “manhood.”

“It’s like a manhood thing for him. As if manhood could ever be associated with him. This wall thing,” Pelosi privately told House Democrats after a combative, on-camera Oval Office meeting with Trump, Vice President Mike Pence and Senate Democratic leader Chuck Schumer. The account was described by an aide who was in the room but not authorized to discuss Pelosi’s remarks publicly.

Pelosi hardly saved her disdain for Trump for the private audience, letting it rip in slightly more respectful tones a few hours earlier when the president invited journalists into the Oval Office for what were billed as talks over the national budget. What ensued was like a political cage match, with everyone except Pence jumping in with ripostes, setups, lectures and insults. The conflict between Trump and Pelosi dominated the scene, which was replete with gender politics.

Speaking outside the White House after the Oval Office meeting, Democratic leaders blasted Trump over his renewed threat to shut down part of the government over funding of a wall on the U.S.-Mexico border. (Dec. 11)

The spectacle suggested a fierce, two-year struggle in which Democrats control one chamber of Congress for the first time in Trump’s presidency. The new Congress is sworn in Jan. 3, and Pelosi is nominated for her second stint as speaker of the House and second in the line of presidential succession. That carries significant stakes for Trump, who faces oversight investigations into his presidential campaign and administration. Additionally, the House will include a record number of women elected in the #MeToo era — most of them Democrats — injecting gender into the discussion like never before.

The developments offered a fresh glimpse into Pelosi’s practice of staying “dignified,” as she said Tuesday, certainly in public. It’s advice she’s doled out before. Just before the State of the Union in January, she cautioned Democrats to not get in the way of Trump being what she described as his “slobbering” self.

On Tuesday behind closed doors, she repeated the advice in an equally colorful way.

“It goes to show you: You get into a tickle contest with a skunk, you get tinkle all over you,” she said, according to the aide.

So there was public Pelosi on Tuesday, and Pelosi in private.

In her opening comments in the Oval Office, Pelosi said failed budget talks would result in a “Trump shutdown” of government.

Within moments, Trump alluded to the fact that Pelosi’s election as speaker is not assured.

“Nancy’s in a situation where it’s not easy for her to talk right now, and I understand, and I fully understand that,” Trump said.

Pelosi responded: “Mr. President, please don’t characterize the strength that I bring to this meeting as the leader of the House Democrats, who just won a big victory.”

She kept it clean through a post-Oval Office press conference, suggesting to reporters that she didn’t want to embarrass Trump over his misstatement of facts in front of the cameras.

Behind the scenes is another story. Out came her gibe about Trump’s masculinity, not her first. In October at Harvard University’s Institute of Politics, Pelosi made a similar comment about Trump’s demand for a wall, calling it “a manhood thing.”

On Tuesday, she told Democrats privately, “He said at the end of the meeting, he said, ’We can go two routes with this meeting: with a knife or a candy. I said, ‘Exactly.’”

She went with the knife.

“I told him about Ronald Reagan,” Pelosi told the Democrats. “I said you probably don’t know who I spoke most about on the campaign trail – what president I spoke most about. He said, ‘Donald Trump.’ I said, ‘I never mentioned your name.’”