Yellow, green, saffron: Colors of protests around the world 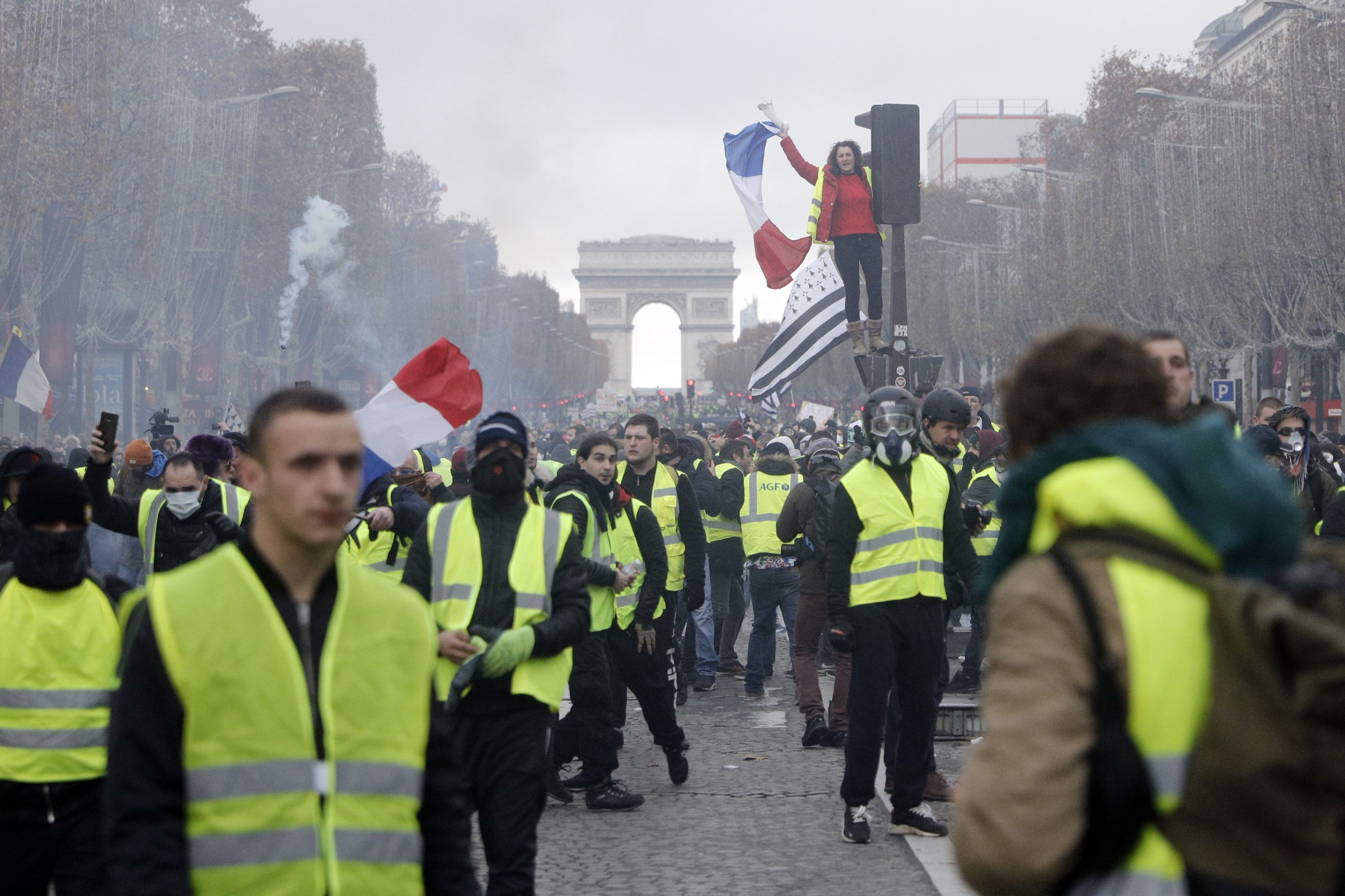 When you’re an activist looking for a way to convey a complex message in a complicated world, you need a hook — something that can command attention across cultures in a memorable and visually arresting way.

So what’s more elemental than associating yourself with a specific color? Just as this month’s demonstrations in France are built around the “yellow vests” that all French drivers must carry in their cars, so, too, have previous movements aligned themselves with specific hues to punch through the static and make a topical statement.

What kind of political movements have built their messages around color in the past?

“Yellow vest” protests have gripped France for four weeks, blocking highways from Provence to Normandy and erupting in rioting in Paris. They’ve shaken the country to its core and left President Emmanuel Macron struggling to retain control.

The unifying shade is in fact the fluorescent yellow-green of security vests that all French drivers must carry in their vehicles in case of car trouble. To many protesters, the vests represent an annoying, government-imposed burden — so they co-opted the garment to broadcast their anger over high taxes and other grievances to the highest levels.

The clusters of high-visibility vests at roadblocks in cities, towns and villages around France act like a beacon to would-be followers of the movement, especially as protests last through the night and the darkest, grayest days of the French year. When demonstrations erupt in violence, the vests also make protesters an easy target for police.
__

The homeland of Pope Francis was closer than ever this year to legalizing abortion after a wave of demonstrations by women’s rights groups and shifting public opinion. The demonstrators staged wide protests in the streets of Argentina wearing green handkerchiefs that symbolize the abortion rights movement.

Lawmakers in August voted against the bill that would have allowed abortion in the first 14 weeks of pregnancy. But women’s groups across Latin America have vowed to keep fighting for a right to abortion.
__

The color yellow was closely associated with massive pro-democracy protests known as the Umbrella Movement. Umbrellas used as protection from pepper spray and tear gas gave the movement its name, and a yellow umbrella came to symbolize it.

Supporters wore yellow ribbons, and a huge yellow banner demanding true universal suffrage was hung from Lion Rock, a well-known landmark. Explanations about how yellow came to represent the protests vary, with some tracing it back to early stirrings of democracy in the 1980s, when the color was borrowed from Philippine protesters who had driven out dictator Ferdinand Marcos.
__

Iran’s largest protests since its 1979 Islamic Revolution grew out of the disputed re-election of hard-line President Mahmoud Ahmadinejad. His reformist challenger, Mir-Hossein Mousavi, had picked green for his campaign urging changes within Iran’s theocracy.

Green is a favored color in Islamic tradition. Others linked it to nature. Poet Eqbal Mansourian warmed up the crowd at one Mousavi rally with the verse: “Make our lives green again, make it rain again, make us hope again.”

Those protesting Ahmadinejad’s win amid widespread allegations of vote rigging adopted the color. Security forces ultimately crushed the demonstrations in violence that saw dozens killed, thousands arrested and others tortured in prison.
__

Buddhist monks were at the forefront of mass protests in 2007 against the country’s military government, and the color of their robes gave the movement its popular Saffron Revolution name.

The government’s decision to raise fuel prices triggered the demonstrations, and at one point, as many as 10,000 monks were reported to have taken part in an anti-government march in Mandalay, in the country’s spiritual heartland. The protests were crushed violently.

The population of Myanmar, formerly known as Burma, is about 90% Buddhist, and the tradition of political activism among the country’s monks dates back to at least the 1920s, when they were closely involved with the movement that sought colonial Burma’s independence from Britain.
__

The Yellow Shirts derived their identity from the color associated with the late King Bhumibol Adulyadej. Royal celebrations for his 60th anniversary on the throne coincided with protests to forced Thaksin out of office for alleged abuse of power, and protest leaders adopted the yellow shirt movement as their own.

The Red Shirts rose in response after Thaksin was ousted in a September 2006 military coup. Red is the color of the Thai flag representing ‘nation,’ one of Thailand’s so-called three pillars, along with religion (represented by white) and monarchy (blue).
__

Orange was the campaign color of Ukraine’s pro-Western presidential candidate Viktor Yushchenko in the 2004 presidential election. His supporters challenged the victory of his pro-Russia rival in the runoff vote and took to the streets in what was dubbed the Orange Revolution.

Massive protests forced the authorities to annul the result and order a new election that Yushchenko won. Russia blamed the West for supporting the protests.
__

The notion of “blue states” and “red states” in the United States emerged during the aftermath of the contested 2000 election when TV networks used frequent on-air maps to show the breakdown between states going for Texas Gov. George W. Bush and Vice President Al Gore.

Though no specific decision was made to render Republicans red and Democrats blue — and, in fact, the opposite had been used sometimes previously — the two colors of the American flag emerged as symbols of their parties that year.

Today, nearly two decades later, talk of red and blue states and even “Red America” and “Blue America” continues, and the relationship between the parties and their respective hues has grown even closer, to the point where some male politicians in the two parties avoid wearing ties in colors that symbolize their opposition.
__

When Philippine opposition leader Benigno “Ninoy” Aquino Jr. flew home on Aug. 21, 1983 from years of self-exile, pro-democracy activists in yellow shirts, dresses, hats and ribbons turned up at Manila’s airport and his residence to welcome him.

The color was inspired by the 1973 top-selling single “Tie a Yellow Ribbon Round the Ole Oak Tree,” a song about an ex-prisoner wondering if he’s still welcome back home.

Aquino was gunned down at the airport, and the brazen assassination ignited massive protests that culminated in the largely nonviolent “people power” revolt and ousted authoritarian leader Ferdinand Marcos three years later.

The army-backed uprising was also dubbed the “Yellow Revolution” for the color that united massive numbers of protesters from all walks of life.