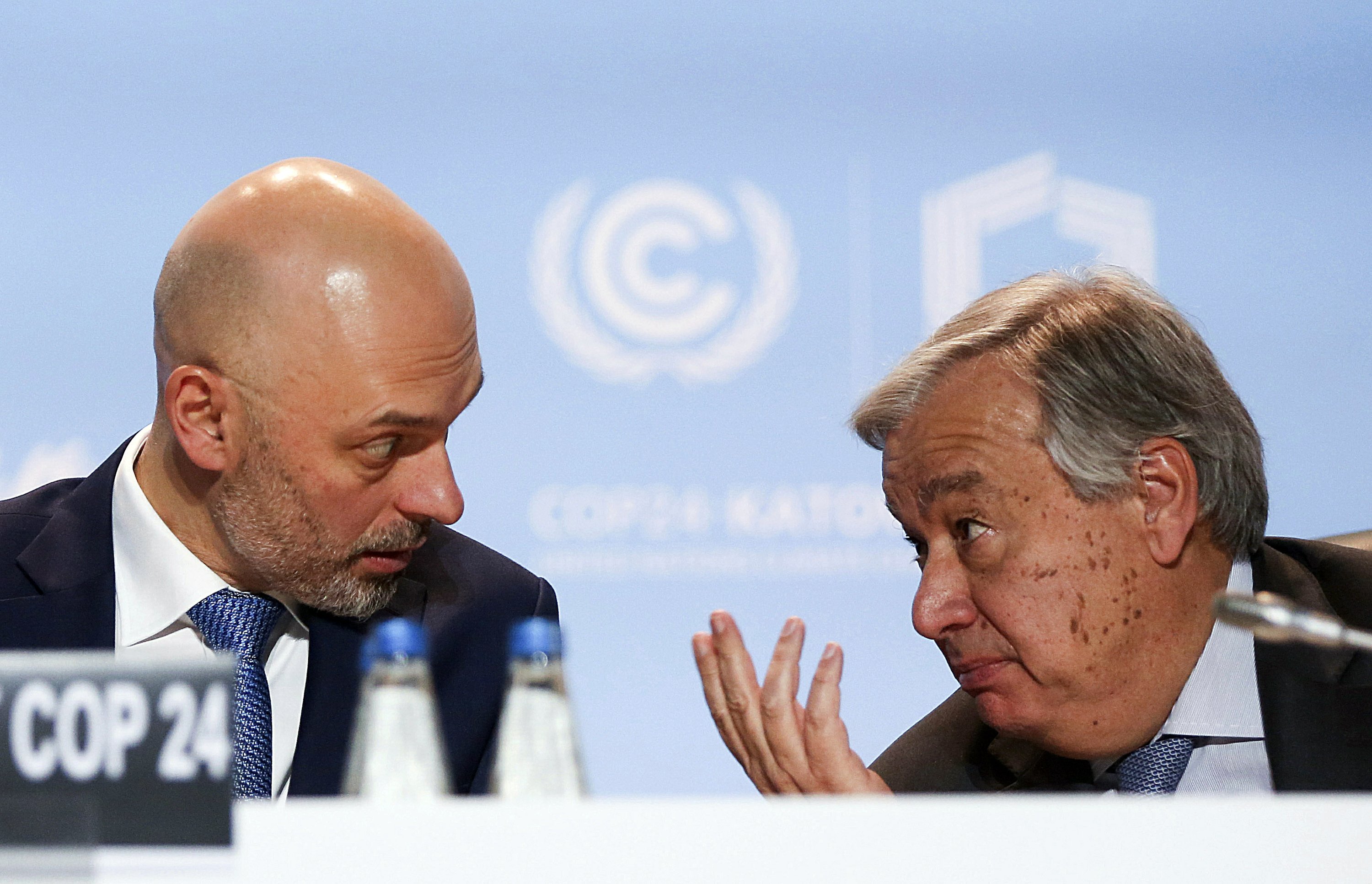 KATOWICE, Poland — The United Nations secretary-general called on countries to make compromises in tackling global warming, amid concern that the U.N. conference on the issue could end without a substantial agreement.

In his second dramatic appeal at the talks in Poland in the space of 10 days, Antonio Guterres told ministers and senior diplomats from almost 200 countries they should consider the fate of future generations.

“This is the time for political compromises to be reached,” he said. “This means sacrifices, but it will benefit us all collectively.”

His call came as the two-week meeting in Katowice shifted from the technical to political phase, with ministers taking over negotiations.

Campaign groups warned of the risks of failure and accused powerful players such as the European Union of not pushing hard enough to reach an agreement.

“A new leadership must step up,” said Vanessa Perez-Cirera of the environmental group WWF. “We cannot afford to lose one of the 12 years we have remaining.”

She was referring to a recent scientific report by a U.N.-backed panel that suggested global warming can only be capped at 1.5 degrees Celsius (2.7 Fahrenheit) if urgent action is taken by 2030, including a sharp reduction in use of fossil fuels.

Endorsing the report by the Intergovernmental Panel on Climate Change became a crunch issue over the weekend, with the United States, Russia, Saudi Arabia and Kuwait opposing the move.

Jean-Pascal Ypersele, a former deputy chair of the panel, said whether or not countries believe the report’s conclusions is irrelevant because the science is clear.

“Nobody, even the so-called superpowers, can negotiate with the laws of physics,” he said.

Ypersele called for the 1.5-degree target — mentioned in the 2015 Paris climate accord — to be recognized in the final text.

“It’s a question of survival for a large part of humanity, and many other species,” he said.

The Polish official chairing the talks circulated a condensed draft text Wednesday that still contained many question marks in areas where countries disagree.

“Parties are progressing,” Michal Kurtyka told The Associated Press. “Nevertheless it is a very complex, a very wide array of issues that we are discussing in parallel at the same time.”

The Dec. 2-14 meeting is supposed to finalize the rules that signatories of the Paris accord need to follow when it comes to reporting their greenhouse gas emissions and efforts to reduce them.

Jennifer Morgan, the head of environmental group Greenpeace, said the current drafts contain too many loopholes to be effective, including one proposal allowing countries to choose how to calculate the amount of emissions absorbed by trees when submitting their reports.

“There’s no scientific integrity in that,” Morgan said.

Poor countries, meanwhile, want assurances on financial support to tackle climate change. Many say they are already seeing the effects of global warming in droughts, floods and other disasters made worse by emissions generated mostly by developed nations.

A third objective of the talks is getting governments to make a firm commit to raising ambitions for addressing climate change in the coming two years, although without precise figures.

Within hours of Guterres’ appeal, dozens of countries announced they would step up their efforts to curb global warming to help kick start stalled climate talks.

The so-called High Ambition Coalition — which includes rich nations such as Germany and Canada as well as developing countries such as Mexico and Fiji — also backed the call to keep the average global temperature rise at 1.5 Celsius.

“The High Ambition Coalition helped to reach the Paris agreement. Now we have to secure this achievement,” said Svenja Schulze, Germany’s environment minister.

Guterres, who made a detour on his way to Yemen peace talks in Sweden, said failure to reach agreement in Katowice “would compromise our last best chance to stop runaway climate change.”

“It would not only be immoral, it would be suicidal,” he added.

Guterres said that while he and most people in the room wouldn’t be alive by the end of the century, children alive today would be.

“I do not want my granddaughters or anybody else’s to suffer the consequences of our failures,” he said, “They would not forgive us if uncontrolled and spiraling climate change would be our legacy to them.”