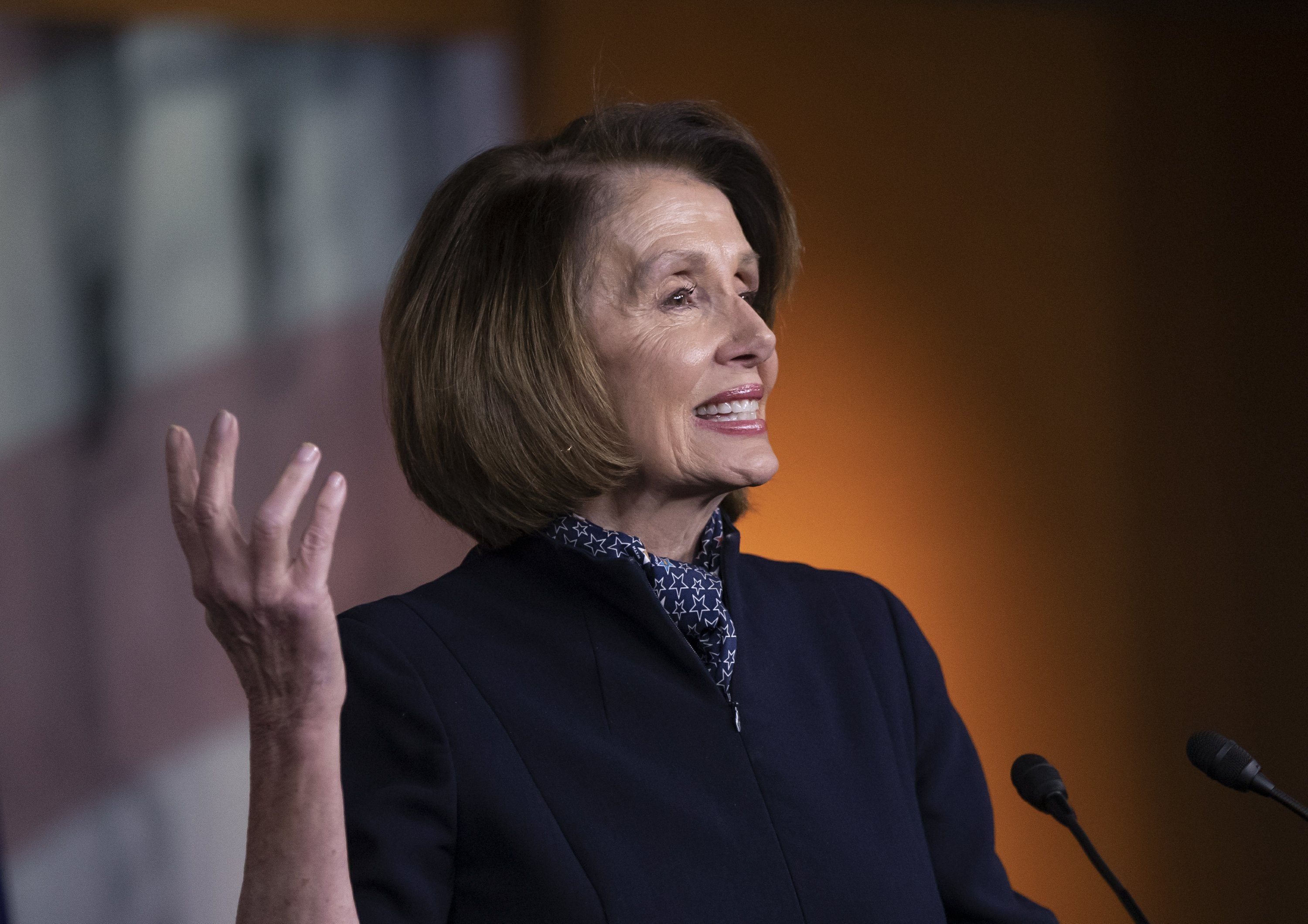 WASHINGTON — It has been quite a week for Nancy Pelosi.

The televised meeting with President Donald Trump. The deal with restless Democrats to secure their votes to become House speaker. The fashion statement of her burnt-orange winter coat, swooshing out the doors of the White House, going viral in social media memes.

It all showed the staying power of the Democratic leader, who is relentless in her drive to reclaim the gavel and wield it with a strength that is nothing like Washington has seen — at least since the last time she did it.

“We’ve seen some strong speakers like Pelosi and some weaker speakers,” said Matthew Green, a professor of political science at Catholic University who has written a book about House speakers.

“What we’ve seen this week is another demonstration of how effective Pelosi is, in both her negotiation skills and in her ability to stand up publicly to a president of the opposite party,” he said. “The most dangerous place to be in Washington is between Pelosi and an undecided vote. It’s like a beeline; she goes right for that person. That’s her thing.”

Pelosi has said this time as speaker would be different. On the campaign trail this fall, she told The Associated Press she would “enjoy it” more because last time it was all “work.” She said she wants to “show the power of the gavel.”

But even before winning back the speakership, she is employing its strength. Pelosi used it during Tuesday’s Oval Office meeting with Trump, refusing his $5 billion border wall money; on Republicans during their last days in the majority; and on her fellow Democrats to give her their support.

The public display this week points to the return of one of the more powerful leaders in the history of the House, even if she’s now term-limited herself to serving as speaker no more than four years. It’s the start of a long final act of the 78-year-old mother of five and grandmother of nine, and she’s more comfortable than ever taking her seat at the table.

“Leader Pelosi really demonstrated this week why she is about to become the speaker of the House,” said Rep. David Cicilline, D-R.I., part of the newer generation of House leaders. “She had a great week.”

Not everyone on the Democratic side is pleased with the turn of events, and Republicans made clear they are more than eager to accommodate Pelosi’s rise, employing the kinds of attacks they have for years used against her. They’ll be targeting newly elected Democrats who vote for Pelosi for speaker when the new Congress convenes Jan. 3, especially those who had vowed on the campaign trail to oppose her.

Republican National Committee chairwoman Ronna McDaniel tweeted that “So many Dem House candidates have proven themselves to be hypocrites.” She tweeted, “Voters won’t forget it.”

And some House Democrats, including members who have been waiting for Pelosi to step aside so they could rise in leadership, are grumbling over the deal she cut to impose term limits for top leaders. Democrats will vote on that proposal in the new year, and it could very well fail. Pelosi has promised to abide by the deal regardless of the vote.

But Thursday, the speaker-in-waiting capped off the week-that-was by recapping what had just happened — in case anyone missed the social media memes of Pelosi in that coat, exiting the White House.

Pelosi recalled the moment Tuesday in the Oval Office when Trump, arguing with her and Senate Democratic leader Chuck Schumer, finally relented and said he’d be “proud” to shut down the government before Christmas — the “Trump shutdown,” as she called it — over the border wall.

She all but eye-rolled at his insistence that Mexico would pay for it. “I mean really? Really?”

And although Pelosi hasn’t spoken to Trump since that day, she confided that he is in her prayers. “I did tell the president that I pray for him. He said, ’That’s news, go tell the press.” And so she did.

In her deal with a group of rebellious House Democrats, Pelosi agreed to limit herself to four years, securing their votes to become speaker. Pelosi said: “They were saying six months.”

Pressed on whether she was making herself a lame-duck leader, she told reporters later, “What, four years? No, I don’t think that’s a lame duck.”

It’s an assertiveness coming from the House side of the Capitol that has not been as evident under outgoing Speaker Paul Ryan, who insisted he never really wanted the job, or former Speaker John Boehner, who was sent to early retirement by conservatives in his ranks.

She’ll be the first House speaker in 50-plus years to reclaim the gavel after an absence, not since legendary speaker Sam Rayburn returned in 1955. One of the most preferred House office buildings next to the Capitol complex carries his name. As the first female speaker when she first held the office, it goes without saying — no woman has done what Pelosi is about to do.

Pelosi has long been a polarizing figure, but in a lopsided way, more demonized by Republicans than beloved by Democrats.

But that seems to be changing after an election that is bringing nearly 40 new Democrats for the House majority, many of them female candidates voted into office on a wave of energy from female voters. The election came against the backdrop of a #MeToo reckoning of women and men in power.

Pelosi is emerging as a leader not only of Democrats on Capitol Hill but also of Democrats and Democratic women nationally —perhaps not quite at the iconic status of Supreme Court Justice Ruth Bader Ginsburg, who has seen movies made about her life and tchotchkes forged in her likeness — but nonetheless, the face of the party, ready to go toe-to-high-heeled toe against Trump.

“Nancy showed her value,” said Rep. Debbie Dingell, D-Mich. “She was steely, but a lady.”