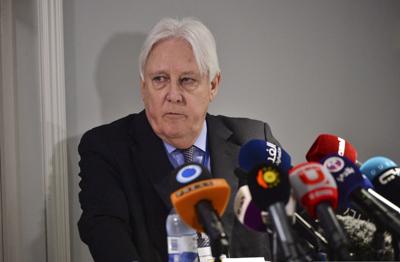 RIMBO, Sweden — The Latest on the U.N.-sponsored Yemen peace talks that are wrapping up in Sweden (all times local):

The World Food Program has welcomed the cease-fire announced for Yemen’s key port city of Hodeida, saying it offers hope to the millions of Yemenis left starving as a result of the four-year civil war.

WFP Executive Director David Beasley said in a Thursday statement that “any progress toward peace is good progress, as long as it helps the Yemeni people who have suffered so much in this conflict.”

Noting that Yemen imports nearly all its food and about 70 percent of that goes through Hodeida’s port, he added that “what all of Yemen needs the most, though, is a permanent, lasting and full peace.”
___

Sweden’s Foreign Minister Margot Wallstrom has lauded the “positive spirit” of the peace talks aimed at setting out a framework for future dialogue in war-ravaged Yemen.

“It takes concessions, it takes compromises and it takes some courage to get these discussions going and get good results in the end,” Wallstrom said Thursday at the closing of the weeklong talks.

The talks, held in the in the Swedish town of Rimbo, north of Stockholm, led to a deal with Yemen’s warring sides, saying they have agreed to a province-wide cease-fire in Hodeida and a withdrawal of troops from the contested Red Sea port city.
___

The United Nations secretary general says Yemen’s warring sides have agreed after week-long peace talks in Sweden to a province-wide cease-fire in Hodeida and a withdrawal of troops from the contested Red Sea port city.

Antonio Guterres thanked the Yemeni delegations for what he called “an important step” and “real progress toward future talks to end the conflict.”

He spoke on Thursday at the closing ceremony for the talks in the Swedish town of Rimbo. A press conference is about to follow.

Guterres said to the Yemeni parties: “Thank you for coming here to discuss a better future for Yemen.”

He also said that the next round of talks is planned for the end of January.
___

U.N. Secretary General Antonio Guterres are the U.N.’s envoy for Yemen are about to brief reporters at the closing of a week of peace talks aimed at setting out a framework for future dialogue in war-ravaged Yemen.

The U.N.-sponsored talks, which end on Thursday, have low expectations for halting the conflict immediately, but have already seen some progress with the agreement of a prisoner swap to include some 15,000 people.

Both sides have said they sought to build on goodwill for future talks, although it was unclear how far they have come in agreeing on a draft agreement given to them a day earlier to consider by U.N. envoy Martin Griffiths, who has sought to remove the key port city of Hodeida from Yemen’s four-year civil war so that aid deliveries can operate freely.
___

Britain’s foreign secretary is joining the Yemen peace talks on their final day in Sweden as part of his efforts to help kick start a political process to bring an end to the impoverished Arab country’s brutal four-year civil war.

His office says Jeremy Hunt will be in the Swedish town of Rimbo along with U.N. Secretary General Antonio Guterres on Thursday, the final day of the U.N.-sponsored Yemen talks.

It says Hunt will also be meeting the delegates from the warring sides — the internationally recognized Yemeni government and the Houthi rebels.

Hunt said ahead of his trip that “Yemen is the world’s worst humanitarian catastrophe, and these peace talks represent the best opportunity in years to move towards the political solution the people of Yemen urgently need.”