Loyalty, rapport: Why Trump chose Mulvaney as chief of staff 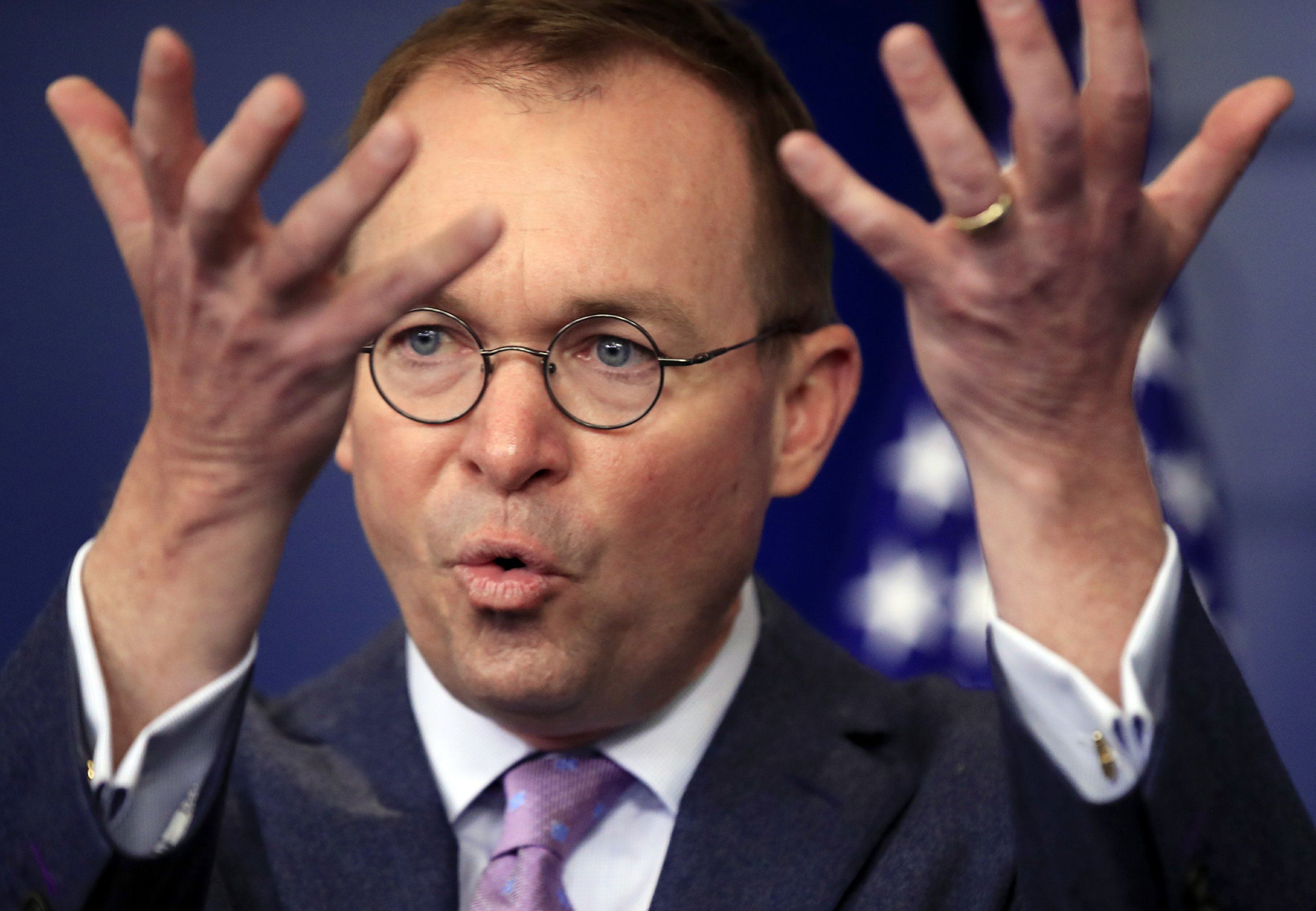 And, as a bonus, a decent golf game.

President Donald Trump had long made clear the qualities he was looking for in his next chief of staff. And when his first pick turned him down, sparking a frantic search, the president turned to the man he’d already tapped for two previous jobs in his administration: Mick Mulvaney, a blunt, fast-talking former South Carolina congressman turned budget chief who had told Trump months ago he wanted the job.

It was an obvious choice to many outside the administration that reflects the challenges ahead: Trump will soon be fighting for re-election as he contends with a House controlled by Democrats eager to use their new subpoena power to investigate his administration and business dealings. And the Russia investigation continues, with the drip-drip of new allegations mounting daily.

But for Trump, a notoriously mercurial president who has already cycled through two chiefs of staffs in as many years, the decision was as much about current appearances as future negotiations: Spurned by several front-runners and angry over the growing narrative that he couldn’t find someone to take the job, Trump made the offer Friday afternoon at a meeting that had originally been scheduled to discuss the ongoing budget showdown that threatens a holiday shutdown. Mulvaney accepted — and even kept his current position as director of the Office of Management and Budget.

Trump had made clear to confidantes that, for his third chief of staff, he wanted someone that he liked personally and who would not try to rein him in as John Kelly had during the first months of his soon-to-sour tenure. Trump missed the more freewheeling feel of the Oval Office under his first chief of staff, Reince Priebus, and wanted someone he could get along with — someone he could trade gossip with, who would complain along with him about his favorite subject, the “fake news,” as well as someone with the political savvy he felted Kelly lacked.

Mulvaney “will let Trump be Trump,” Sen. Rand Paul, R-Ky., who knows both men well, said in an interview Saturday. While other top advisers in the administration have tried to steer the president’s policies, Paul said, Mulvaney gets Trump and shares some of his instincts on both domestic and a non-interventionist foreign policy.

Mulvaney’s “not going to squash” Trump’s instincts, said Paul, who welcomed the congressman as an early supporter of his own libertarian-leaning presidential bid in 2015.

Though Mulvaney had sent mixed public signals in recent weeks as to whether he wanted the chief of staff position, he previously expressed to Trump that he wanted the job. Over a dinner last summer during a bout of deliberations about Kelly’s future, Mulvaney told Trump that was interested and vowed to manage the staff and not the president, an answer Trump liked, according to a White House official and a person familiar with the dinner who were not authorized to publicly discuss private conversations.

Having grown increasingly weary of aides who would tell him no, Trump felt aligned with the man he had appointed OMB director. He also had become personally fond of Mulvaney as the two met to discuss budget matters and played golf together. The president, who has little patience for lengthy briefings, also appreciated the colorful maps and graphics the budget director would use to highlight his presentations. And he considered Mulvaney a natural on television.

During one particularly memorable televised Cabinet meeting, Mulvaney discussed his efforts to overhaul government regulation by explaining, in dramatic exasperation, that the Food and Drug Administration regulates cheese pizza, but not if one adds pepperoni, and that an open-face roast beef sandwich comes under different jurisdiction than one with two slices of bread.

“This is stupid,” said Mulvaney at the end of his colorful monologue.

“That was incredibly said,” Trump marveled, telling the assembled press, “I think you should put that on television, not what I said.” For Trump, who rarely likes to cede the spotlight, it was an especially notable comment.

Mulvaney, who was elected to Congress in the 2010 tea-party wave, had also shown a willingness to put aside his own, long-held principles in service of Trump. In Congress, he had been a staunch fiscal conservative who helped found the hard-right House Freedom Caucus and railed against deficits. But at OMB, he presided over a growing federal deficit as Trump boosted defense spending and pushed steep tax cuts.

Indeed, in February Mulvaney told a congressional committee that, as a member of Congress, he probably wouldn’t have voted for the budget proposal he was presenting.

“But I’m the director of the Office of Management and Budget,” he said, “and my job is to fund the president’s priorities, which is exactly what we did.”

After he was announced as budget director, House Democratic leader Nancy Pelosi called Mulvaney a “radical” who had consistently voted to cut Medicare benefits and was a supporter of government shutdowns in 2013 and 2015 over spending for the health care law and Planned Parenthood.

Pelosi spokesman Drew Hammill added, “It sends a clear message that at this critical time the President would choose to elevate the architect of the last Republican government shutdown.”

Democratic Senate leader Chuck Schumer on Friday said in a tweet that Trump’s decision to elevate Mulvaney to the chief of staff role was “Very troubling (but not surprising!)”

But Jonathan Slemrod, who ran Mulvaney’s outreach to Congress, said Mulvaney has the ability to work on Capitol Hill and was a skilled manager who could run a large organization.

“Mick has stronger relationships on the Hill than the press wants to write,” Slemrod said. “He’s willing to compromise. He’s willing to work with both sides.”

Rep. Jim Jordan, R-Ohio, another founder of the House Freedom Caucus, also downplayed any friction between Mulvaney and rank-and-file Republicans, saying there has been nothing that needed smoothing over.

“Mick is a great pick,” Jordan said, and will “do an outstanding job.”

It is unclear how extensively Mulvaney plans to reorganize the White House. In a letter to OMB staff Saturday afternoon obtained by The Associated Press, Mulvaney said that four staffers — including his chief of staff, Emma Doyle — would be moving over to the West Wing when he begins, effective Jan. 2.

“When I got here almost two years ago, I told everyone that I had one goal, one motto, one sort of mission statement for OMB: quiet competence. That is, after all, what OMB is all about,” he said in the letter. “I plan to take this motto with me as I work to fill the shoes of General Kelly, who provided an outstanding service to the President and the American people.”