The Latest: Seahawks and 49ers headed to overtime 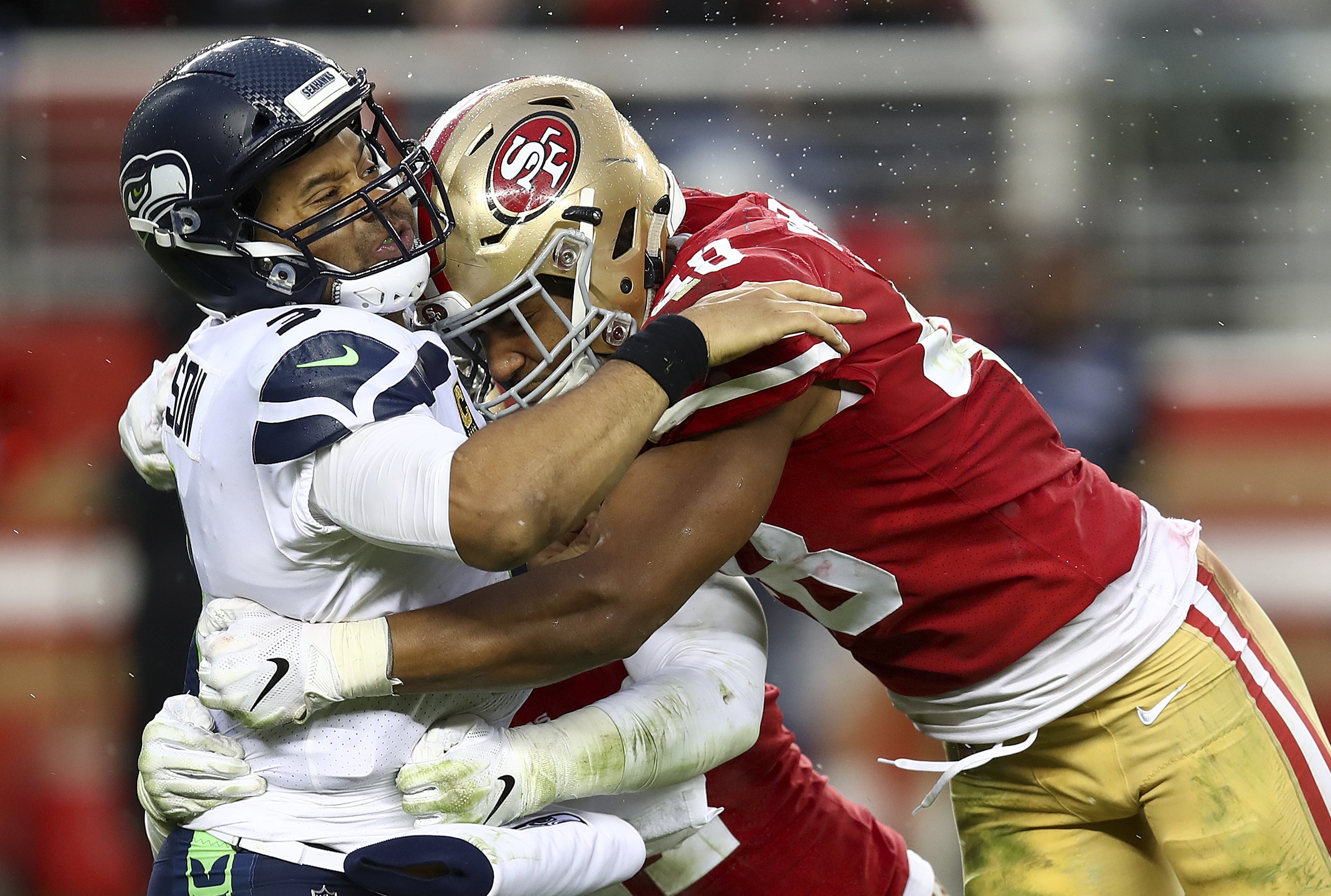 The Latest on NFL’s Week 15 (all times Eastern):

The Seattle Seahawks and San Francisco 49ers are headed to overtime tied at 23.

Chris Carson tied the game early in the fourth quarter for Seattle when he scored on fourth-and-goal from the 1. He appeared to be stuffed at the line by D.J. Jones but managed to get out of that tackle and then fight through another attempt by Elijah Lee before diving over the goal line for the score that made it 20-all.

The teams then traded field goals later in the fourth to set up the overtime.

Seattle has won 10 straight in the series and can clinch a playoff berth with a win.

Tom Brady has made a rare mistake for the second straight week.

Pressured on second-and-goal from the Pittsburgh 17 midway through the fourth quarter Brady heaved the ball toward the sideline. Steelers cornerback Joe Hayden came down with it inside the 5-yard line before tumbling out of bounds with two Patriots receivers.

That was the first red zone interception thrown by Brady in 180 attempts, since Dec. 12, 2016, against the Ravens.

Last week, Brady forgot he was out of timeouts and took a sack on third-and-goal at the Miami 2 with 14 seconds left in the first half. The points he left on the field proved costly in a one-point loss to the Dolphins.

The Steelers are ahead 14-10 with less than seven minutes left.
___

A week after upsetting the Broncos, the 49ers are locked in a 20-20 game with the Seahawks in the fourth quarter in Levi’s Stadium.

Seattle is 8-5 and even a loss won’t bump them out of the fifth spot in the NFC playoff picture.

The 49ers can improve to 4-10 with a win. They beat Denver at home last week 20-14, and the Broncos were eliminated from the AFC playoff race today following their 17-16 loss to the Browns in prime time Saturday night.

In the only other late-afternoon game, the Steelers are leading the Patriots 14-7 as they seek their first win over New England since 2011.

The Eagles visit the Rams tonight and the Saints visit the Panthers on Monday night.
___

The Pittsburgh Steelers are halfway to their first victory over the New England Patriots since 2011.

The Steelers took a 14-7 lead through two quarters at Heinz Field. Ben Roethlisberger has two touchdown passes, a 5-yarder to tight end Vance McDonald and a 17-yarder to wide receiver Antonio Brown.

Brown now has over 11,000 career receiving yards. He reached the milestone in 129 games, the second-fastest in NFL history behind former Detroit Lions star Calvin Johnson, who did it in 127 games.

Tom Brady has 138 yards passing and a 69-yard score to Chris Hogan on New England’s third offensive snap but the Patriots were largely held in check.

The Patriots can clinch their 10th straight AFC East title with a win.
___

Chicago offensive lineman Charles Leno Jr. will get a chance to pursue a ring next month but his girlfriend got hers moments after the Bears clinched the NFC North.

After the Bears beat the Packers 24-17 to end an eight-year playoff drought, Leno brought his girlfriend to midfield and popped the question .

A half dozen teams have been eliminated from playoff contention today.

The Packers, Giants, Lions, Falcons and Buccaneers are all out in the NFC.

The only AFC team to get erased from the playoff picture today was the Broncos, who lost 17-16 to the Browns last night.

At 6-7-1, the Browns are still clinging to hopes of ending the league’s longest playoff drought at 16 seasons just a year after going 0-16.

They’re also on the cusp of their first winning season since 2007.

The Broncos appeared to have the easiest road to the AFC’s second wild-card spot two weeks with three games remaining against losing teams and a finale against the Chargers, a team they’d already beaten on the road.

The Bears have joined the Saints and Rams in the NFC playoff field. All three are division winners.

The Cowboys remain in the NFC East lead despite getting shut out for the first time since 2003 with a 23-0 loss to the Colts.

The Seahawks and Vikings are the current wild-card leaders.

Minnesota beat the Dolphins 41-17 and the Seahawks are playing at San Francisco this afternoon.

Still in the NFC playoff hunt are the Redskins, Panthers, Eagles and Packers despite not having winning records. The Packers are 5-8-1.
___

In the AFC, the Chiefs are clinging to the top seed despite losing 29-28 to the Chargers at home on Thursday night.

The Chiefs and Chargers are 11-3 and they’re the only AFC teams to have clinched a playoff berth.

The Patriots can clinch their 10th consecutive AFC East title with a win at Pittsburgh today.

The Texans are currently the No. 2 seed, but they can’t clinch the NFC South until next week because both the Colts and Titans won today.

A New England win over the Steelers would clinch a playoff berth for the Texans, who are currently the No. 2 seed in the AFC.

The Ravens currently hold the second wild-card spot but the Colts and Titans are also 8-6 and the Dolphins, Browns and Broncos are still in the hunt.
___

The Monsters of the Midway are back — in the playoffs.

The Chicago Bears clinched the NFC North title with a 24-17 victory over the Green Bay Packers at Soldier Field, ending an eight-year playoff drought.

In the AFC, the Colts handed the Cowboys their first shutout in 15 years, a 23-0 win that improved Indianapolis’ record to 8-6, tied with the Ravens, who hold the tiebreaker for the second AFC wild-card spot. Baltimore beat the Buccaneers 20-12 today.

Green Bay quarterback Aaron Rodgers’ NFL record of 402 pass attempts without an interception has come to an end in Chicago.

Rodgers’ pass bounced off tight end Jimmy Graham in the end zone and settled into the arms of Bears defensive back Eddie Jackson.

New England Patriots wide receiver Julian Edelman is paying tribute to the 11 members of a Pittsburgh synagogue killed during a shooting in October.

Edelman, who is Jewish, wore specialized cleats during pregame warmups at Heinz Field. The right cleats featured the Star of David and the hashtag “stronger than hate.”

The left cleat included the logo of the Tree of Life synagogue as well as writing in Hebrew.

Edelman tweeted out a picture of the cleats along with the names of the 11 victims. Edelman told The Associated Press in the wake of the attack he’s heard antisemitic taunts during his career but likened it to fans simply trying to get under his skin.

Patriots owner Robert Kraft, who is also Jewish, visited the Tree of Life on Saturday and later attended services at another synagogue according to the NFL Network.

—Will Graves reporting from Pittsburgh
___

Bills receiver Isaiah McKenzie has been carted off after hurting his lower right leg during a punt return midway through the third quarter of Buffalo’s game against the Detroit Lions.

McKenzie went down on his own and grabbed at the back of his leg following a 10-yard return.

McKenzie had a team-leading six catches for 53 yards.

Buffalo also announced running back Marcus Murphy would not return after hurting his left arm. Murphy was hurt earlier in the quarter.

The Buffalo Bills are down to their final running back after Marcus Murphy was escorted off the field holding his lower left arm.

The Bills announced Murphy’s return was doubtful. He was hurt while being tackled on a 3-yard run late in the second quarter of Buffalo’s home game against Detroit.

At one point, Murphy doubled over in pain while being escorted along the sideline.

The Bills started the game depleted at running back with starter LeSean McCoy and backup Chris Ivory sidelined by injuries.

The injury to Murphy leaves Buffalo with rookie Keith Ford as their only running back. Ford was promoted off the practice squad earlier this week.

Carr has thrown 14 passes against the Bengals, extending his streak to 277 without a pick, topping Gannon’s mark from 2001.

Titans running back Derrick Henry has rushed for 104 yards on 17 carries and scored from a yard out in the first half against the Giants.

Coupled with his franchise-record 238 yards rushing effort against Jacksonville 10 days ago, he is the Titans’ first running back to have back-to-back 100-yard rushing performances since DeMarco Murray in October 2016.

That’s unless he goes in reverse the rest of the game.
___

Miami Dolphins running back Frank Gore is questionable to return to the game at Minnesota with an injury to his left ankle.

Gore was hurt during a carry on the second-to-last play of the first quarter, when his leg bent awkwardly beneath the weight of Vikings defenders Anthony Barr and Anthony Harris.

Gore limped slowly off the field and was taken away on a cart after reaching the sideline.

The 35-year-old Gore is the NFL’s active leader in career rushing yards. He’s in his first season with the Dolphins. He hasn’t missed a regular season game since 2010.

Falcons linebacker Deion Jones got back in the end zone again.

Jones, in his fourth game back after spending most of the season sidelined by a foot injury, has scored a touchdown for the third time in seven career interceptions.

Jones forced a 7-all tie with Arizona in the first quarter, snagging Vic Beasley’s batted ball from the air and running 41 yards for Atlanta’s second defensive TD of the season.

The third-year linebacker spent the first part of the game covering David Johnson and was in the left flats shading the running back when Beasley tipped Josh Rosen’s pass.
___

Interim Minnesota Vikings offensive coordinator Kevin Stefanski has sure quickly settled in to his new role as the play caller.

The Vikings have scored touchdowns on each of their first three possessions against Miami.

This was their highest-scoring first quarter since Oct. 9, 2011, against Arizona. In their last four games, the Vikings totaled only 21 first-half points.

Stefanski, the quarterbacks coach, was promoted this week by head coach Mike Zimmer after firing offensive coordinator John DeFilippo. The Vikings have been held under 285 total yards in four of their previous five games.

Washington quarterback Alex Smith has been released from the hospital following multiple surgeries to his broken right leg.

His wife, Elizabeth Smith, posted an update on Instagram on Sunday morning and said she was grateful to have her husband home.

She wrote, “HOME…This last month has been a difficult ride. Our family is beyond happy to have this man with us and home. This experience has given us great perspective and gratitude for all the people and blessings in our lives. We couldn’t have gotten through it without our amazing family, friends and community. A special thank you to the relentless doctors, nurses, techs, hospital administrators, the Snyder family and the Washington Redskins.”

Smith sustained a spiral fracture to his right leg when he was sacked in a game against the Houston Texans on Nov. 18. He underwent surgery the following day to repair his fibula and tibia. NFL Network and Washington’s 106.7 FM reported that a leg infection complicated his recovery and required further procedures.