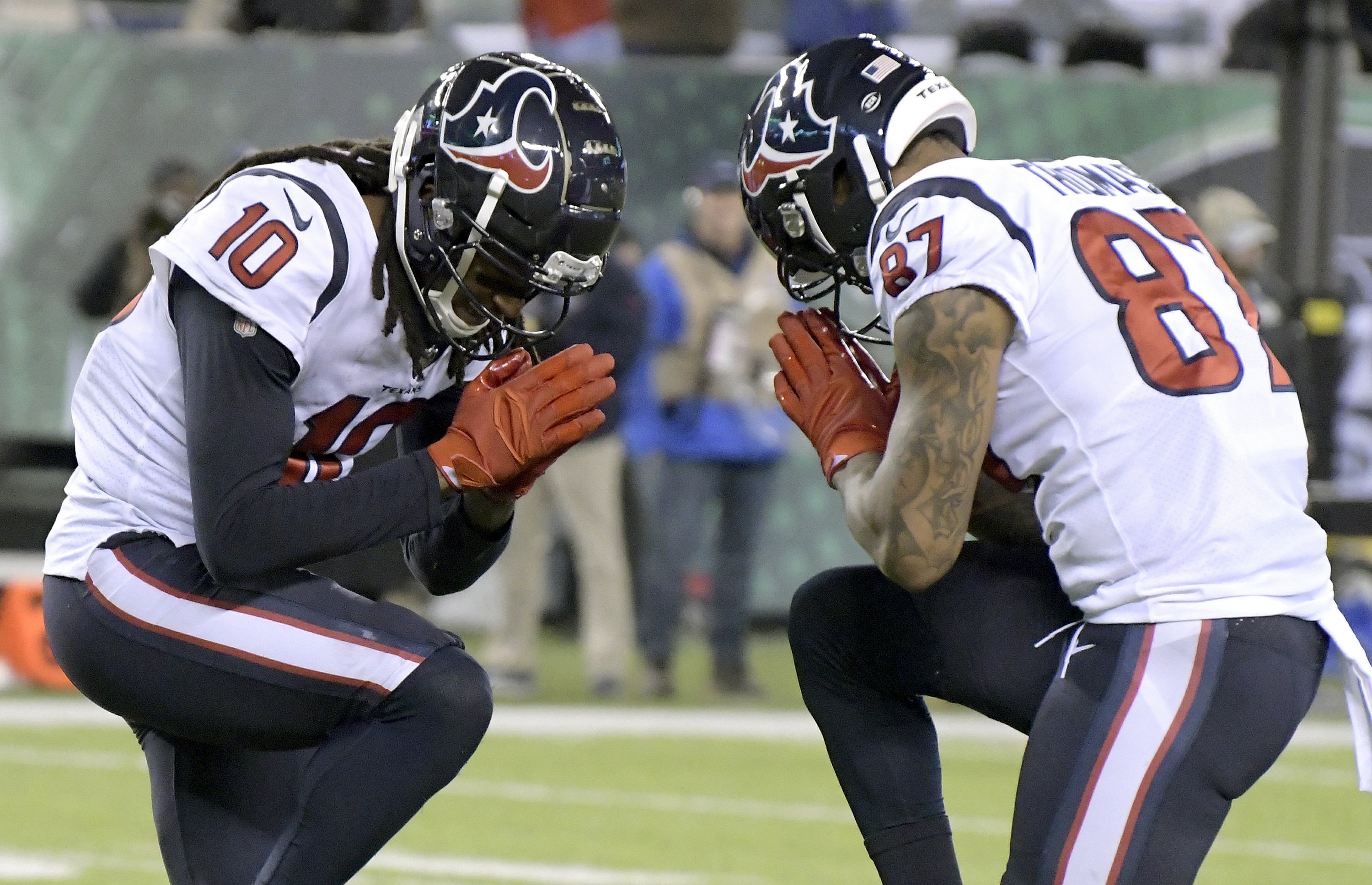 After Darnold and the Jets took their first lead of the game on Elijah McGuire’s 2-yard touchdown run, Watson and the Texans (10-4) answered right back.

A holding call on cornerback Morris Claiborne on third down prolonged the drive, and Watson completed passes of 20 and 3 yards to Demaryius Thomas and 7 yards to Hopkins to get to New York’s 14. Watson then found Hopkins streaking down the left sideline and launched a pass that the receiver somehow came down with despite being tightly covered by Claiborne.

Hopkins appeared to injure a leg on the play, and Watson and Alfred Blue helped him to the sideline as the Texans celebrated. The receiver was OK, though, and finished with 10 catches for 170 yards and two TDs.

Darnold and the Jets (4-10) had one more opportunity to try to tie —or win— but Houston held on.

The loss ruined what was a terrific night for Darnold, who made plays with his arm and legs all game. The No. 3 overall pick was 24 of 38 for 253 yards and touchdown passes to Robby Anderson and Andre Roberts. He set up an impressive 15-play, 73-yard go-ahead drive late during which he converted three third-down plays and a fourth-down opportunity.

On third-and-10 from the 19, Darnold took off for 14 yards — and a holding call on Aaron Colvin put the ball on the 2. After Darnold was stopped for no gain on a quarterback draw, he handed the ball to McGuire who pushed up the middle — surrounded by a surging mass of blockers who helped shove him all the way into the end zone for the score.

It set off a wild celebration by the Jets. But Watson and the Texans — whose nine-game winning streak was snapped by Indianapolis last Sunday — weren’t going to go down for the second straight game.

Fairbairn gave the Texans a 3-0 lead with a 41-yard field goal with 9:23 left in the opening quarter — after the Jets appeared to catch a bit of a break. On third-and-7 from the 9, Henry Anderson grabbed hold of Watson, who somehow slipped out of the defensive end’s grasp and had some room to run. But the officials called the play over because they ruled Watson’s forward progress had been stopped, and Anderson was credited with a 13-yard sack and forcing Houston to settle for the field goal.

Jason Myers tied it at 3 for the Jets with a 26-yard field goal with 2:01 remaining in the first quarter. Houston regained the lead on Fairbairn’s 32-yarder early in the second quarter.

The Texans got the ball back a few minutes later when J.J. Watt forced the ball out of McGuire’s hands and Angelo Blackson recovered it. Two plays later, Watson launched a deep pass for Hopkins, who got past Darryl Roberts — who was turned around on the play — and adjusted to the ball in the end zone for a touchdown that made it 13-3 midway through the second quarter.

Darnold gave the Jets some life just before halftime with a terrific drive during which he made plays with his legs — a 10-yard run on third-and-3 — and arm — passes of 16 yards to Chris Herndon and 26 to Robby Anderson. On first-and-goal from the 5, Darnold scrambled a bit before stepping up in the pocket and zipping a pass to Anderson for a touchdown to make it a 16-9 game.

But, Myers then missed his second extra point of the season — and 14th of his career.

Darnold picked up where he left off in the first half, leading the Jets on another touchdown drive, driving New York down the field and capping another impressive possession with a 13-yard toss to Andre Roberts. Darnold kept the drive alive on third-and-10 from the Jets 40 with a laser-like throw to Robby Anderson for 20 yards.

Myers followed by missing his second straight extra point as Houston remained ahead 16-15. Fairbairn’s 49-yarder increased the Texans’ lead to 19-15 with 12:33 left.

Houston running back Lamar Miller left with an ankle injury in the second quarter and didn’t return. He was initially hurt early in the first quarter Saturday when he went down after a 1-yard run. He tried to get up and walk it off before going back down to the turf and being attended to by trainers. He returned on Houston’s next possession, but left again early in the second quarter. He had 8 yards on three carries against the Jets. … Jets starting right tackle Brandon Shell was carted off the field early in the third quarter with a knee injury. He was blocking during a passing play when left guard Spencer Long rolled into his left leg. … Texans nose tackle Brandon Dunn also left with an ankle injury and didn’t return. … Jets wide receiver Rishard Matthews left with a hamstring injury.

GETTING TO THE QB

Henry Anderson had three of the Jets’ six sacks of Watson. It marked the first time New York had six or more since it had seven against Buffalo on Nov. 2, 2017.

Texans: at Philadelphia on Dec. 23.