Chechen critic fears for his life as he faces deportation 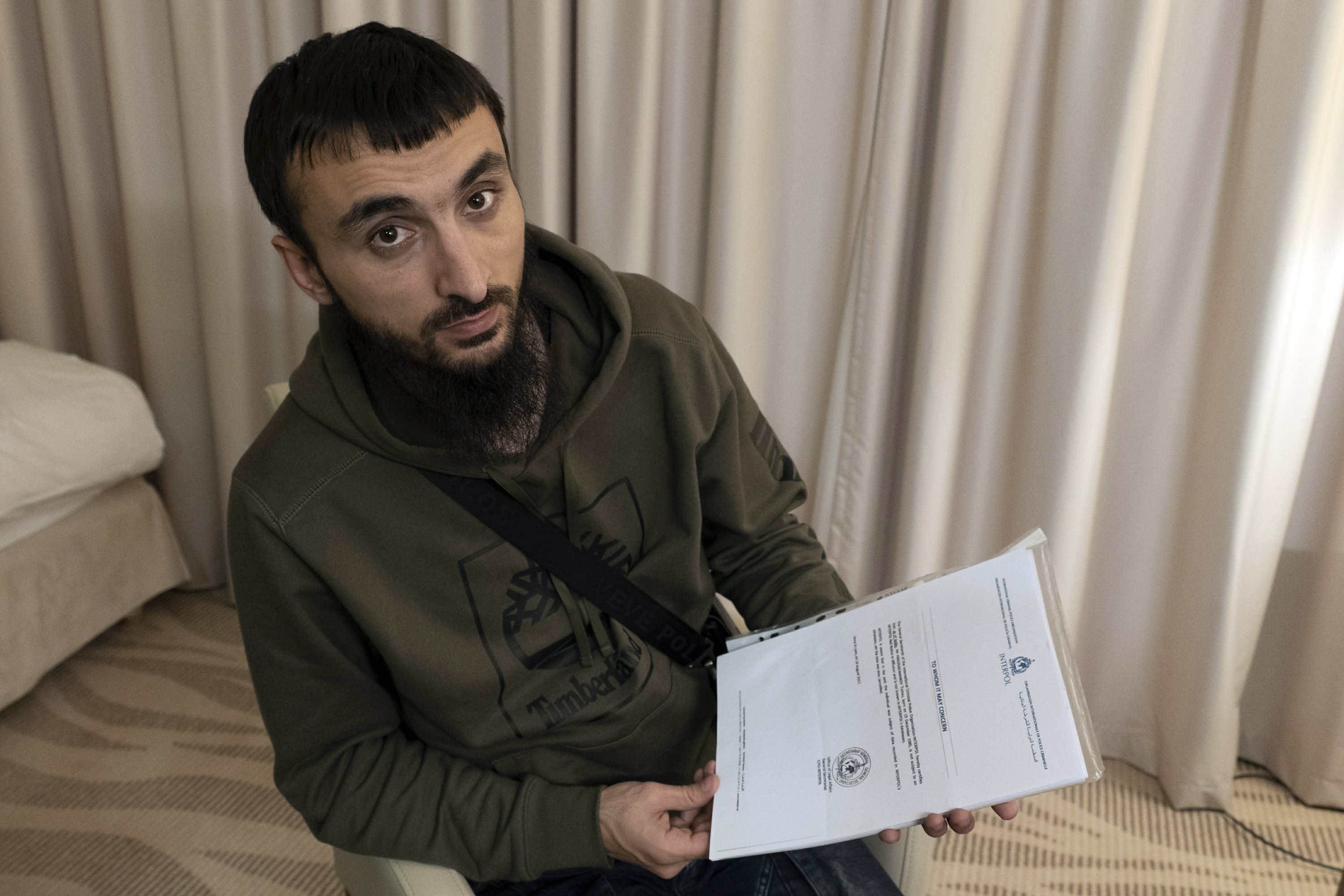 MOSCOW — A gravelly voice rings out from the phone’s loudspeaker: “Aren’t you scared of me?”

“I’m not scared of people like you,” he says, looking into the camera. “But you people are cruel, so I’m always on my guard.”

He was apparently talking to one of the most feared men in the Russian province of Chechnya, Magomed Daudov, the right-hand man of strongman Ramzan Kadyrov.

Kadyrov and his security forces have been widely accused by international rights groups of extrajudicial arrests, torture and killings — and Kadyrov has warned that Chechens who fled abroad will pay dearly for their criticisms of his rule if they return home.

Abdurakhmanov — who fled Chechnya in 2015 and has been seeking asylum ever since — now faces deportation from Poland. His case highlights the challenges for people from mostly Muslim Chechnya trying to seek asylum in Europe, where governments have become increasingly reluctant to let them in amid terrorism fears and growing anti-migrant sentiment.

“If I go back there, that’s the end for me,” Abdurakhmanov told The Associated Press. “I can’t even fathom the horrible things that will happen.”

The chilling video in which Daudov reportedly contacts Abdurakhmanov through WhatsApp and threatens him has been watched by over 2 million people. It offers a rare glimpse at the methods Chechen authorities use to intimidate critics.

Forced to flee Chechnya after falling afoul of a powerful official, Abdurakhmanov runs a highly popular YouTube channel, criticizing and ridiculing Chechnya’s authorities. His channel, which has over 100,000 subscribers, focuses on human rights violations and endemic corruption. He calls it “a breath of fresh air” for Chechens who can’t freely discuss such subjects at home.

“It’s a rare phenomenon that someone from the worst totalitarian enclave in Europe has become so outspoken,” said Katya Sokirianskaia, director of the Conflict Analysis and Prevention Center in St. Petersburg.

Human rights activists have strongly opposed his deportation, warning he will face torture or even death if he returns to Chechnya. In August, another Chechen refugee, Azamat Bayduev, was deported from Poland. A day later, Bayduev was arrested and hasn’t been heard from since.

In a 2016 video, Kadyrov warned those in exile “when you are kicked out of Europe and have nowhere to go, you will answer to me for every word!”

Poland has provided subsidiary protection to Abdurakhmanov’s wife and three young children, accepting that a threat to their lives exists in Chechnya. But it has rejected his asylum appeal on the grounds that he poses “a possible security threat” due to possible links to extremist organizations. Poland has kept its reasons classified, meaning even Abdurakhmanov doesn’t know what he’s suspected of.

Poland’s Office for Foreigners says each asylum application is viewed on a case-by-case basis. Spokesman Jakub Dudziak would not comment on Abdurakhmanov’s case, but said “each person requesting protection must be vetted by the security services.”

Poland’s Internal Security Agency and the Polish Border Guards both declined to comment on his case.

Chechen authorities have accused Abdurakhmanov of leaving Russia for Syria on Nov. 8, 2015, to join the Islamic State group and flagged him as a wanted suspect to Interpol. He was put on Interpol’s global list of wanted suspects but Interpol later took him off it.

Abdurakhmanov rejects the Chechen accusations. He showed the AP copies of his passport, which has stamps proving that on the dates Chechen authorities claimed he was in Syria he was in Kazakhstan, getting his wife and children to safety.

Sokirianskaia said Chechen authorities often fabricate cases against critics, pointing to the current trial of Oyub Titiyev, a rights activist accused of drug charges that are widely seen as fabricated.

“They understand very well that terrorism charges are the most effective in getting a reaction from European governments,” she said.

Russia has often been accused of trying to use Interpol for political ends.

Abdurakhmanov says he was an ordinary telecommunications worker when he ran afoul of Islam Kadyrov, a relative of Chechnya’s leader, who disliked his heavy beard. Chechnya’s leader has cast himself as a pious Muslim and encouraged strict Islamic rules in the southern Russian region, but has launched a sweeping crackdown on suspected followers of radical Salafi branch of Islam who wear long beards.

Abdurakhmanov says he was threatened with torture and death. The next day he fled with his family, sending his wife and children separately to Kazakhstan and then driving his mother and brother to the ex-Soviet nation of Georgia. He said he stayed in Georgia for 20 months and was twice refused asylum.

On July 11, 2017, Abdurakhmanov and his family flew from Georgia to Russia’s westernmost exclave of Kaliningrad on a flight that stopped over in Warsaw, where he told border guards they were refugees.

They spent the next six months in the grim conditions of a Polish migrant detention center. Following his release, Abdurakhmanov applied for refugee status, but when his application was rejected for a second time in August he was ordered to leave the country.

“I don’t have anywhere else to go,” he said, his voice cracking. “I can’t seek asylum elsewhere. I can’t go home. I can only sit here and await my fate.”

Abdurakhmanov is not alone. According to Polish statistics, 3,100 people filed for asylum in Poland in the first nine months of 2018, about 2,000 of them Russians, primarily from Chechnya. But just 63 Russians were granted asylum.

EU governments have become increasingly reluctant to accommodate refugees, not just ones from Chechnya.

Germany tightened its asylum regulations after more than 1 million migrants, primarily from Syria and Iraq, entered the country in 2015-2016. Fewer than 10 percent of the Chechens who have applied for asylum since 2013 were allowed to stay in Germany.

Frank Nuernberger, the domestic intelligence chief in the state of Brandenburg, home to Germany’s biggest Chechen community, told public radio Antenne Brandenburg that many Chechen men have combat experience from the region’s separatist wars against Russia in the 1990s and some have fought with Islamic State militants in Syria.

“Many Chechens have indeed joined global jihadists groups in recent years,” Sokirianskaia said. “Most (asylum) cases from Chechnya now get rejected, and we can see a pattern of the security threat being used as a reason for rejection.”

But she said Abdurakhmanov is the type of person that asylum laws were designed for.

“This is a clear case of someone as an outspoken critic, who has the highest likelihood of being subjected to torture, and who requires protection,” she said.