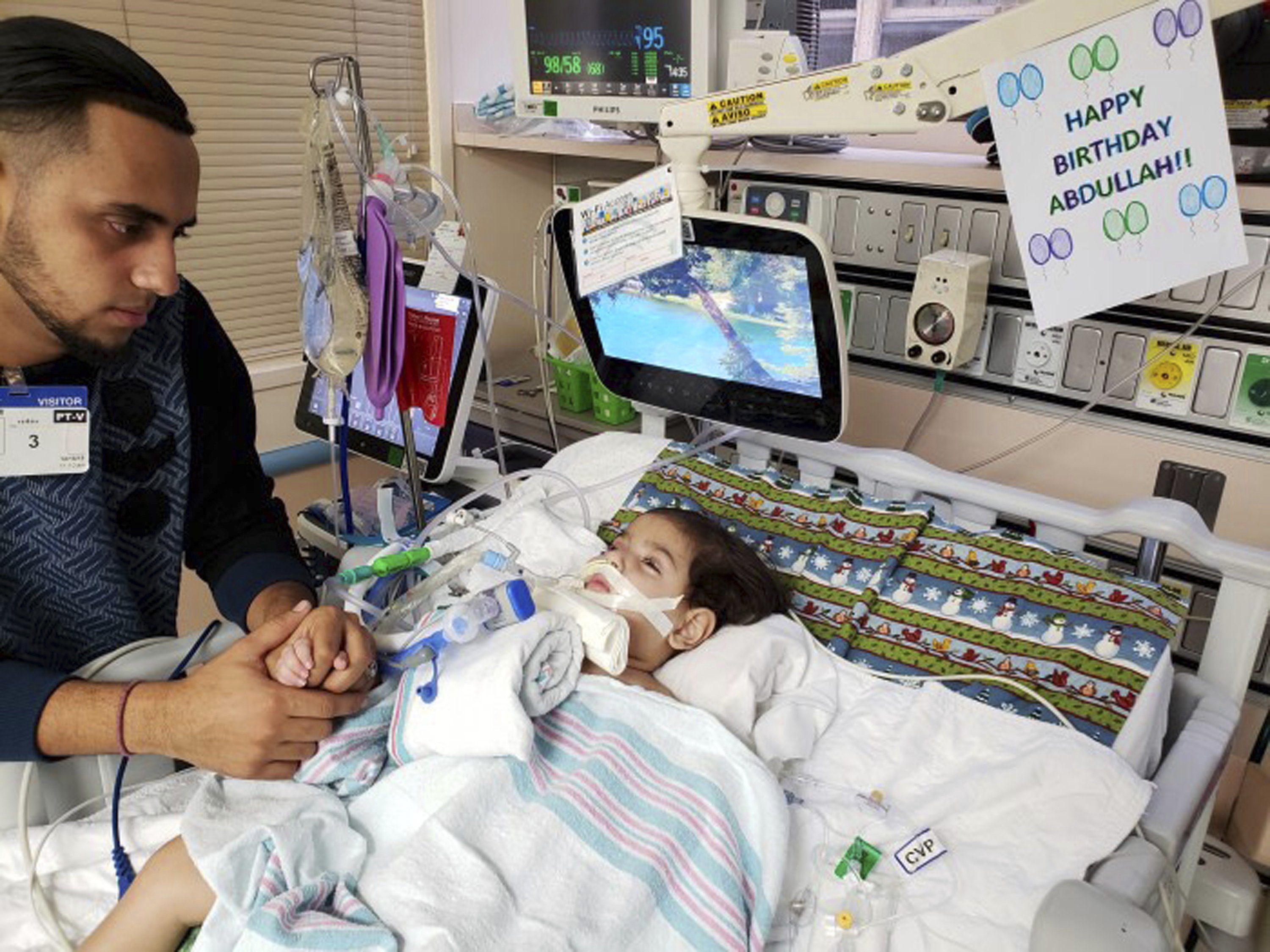 All Shaima Swileh wants is to give her son one more kiss before he dies.

The Yemeni woman is about to get her wish after winning her fight for a waiver from the Trump administration’s travel ban so she can fly to California where her 2-year-old son is on life support.

The State Department granted Swileh the waiver on Tuesday after lawyers with the Council on American-Islamic Relations sued this week, ending a year-long battle for the family. Swileh is planning to fly to San Francisco on Wednesday to see Abdullah at UCSF Benioff Children’s Hospital in Oakland.

“This will allow us to mourn with dignity,” the boy’s father, Ali Hassan, said in a statement provided by the Sacramento chapter of the Council on American-Islamic Relations.

Hassan, who is a U.S. citizen and lives in Stockton, brought Abdullah to California in the fall to get treatment for a genetic brain disorder.

“My wife is calling me every day wanting to kiss and hold her son for the one last time,” Hassan said, choking up as he made a public plea at a news conference Monday, a day before the government granted the visa.

The couple moved to Egypt after marrying in war-torn Yemen in 2016 and had been trying to get a visa for Swileh since 2017 so they could all move to California. Citizens from Yemen and four other mostly Muslim countries, along with North Korea and Venezuela, are restricted from coming to the United States under the travel ban enacted under President Donald Trump.

When the boy’s health worsened, the father decided to go ahead to California in October to get their son help.

As Swileh and her husband fought for a waiver, doctors put Abdullah on life support.

“I am emailing them, crying, and telling them that my son is dying,” Hassan said in an interview with The Sacramento Bee newspaper.

After getting electronic responses, Hassan started losing hope and was considering pulling his son off life support to end his suffering. But then a hospital social worker reached out to the council, which sued Monday, said Basim Elkarra of the Council on American-Islamic Relations in Sacramento.

Swileh lost months with her child over what amounted to unnecessary delays and red tape, Elkarra said.

State Department spokesman Robert Palladino called it “a very sad case, and our thoughts go out to this family at this time, at this trying time.”

He said he could not comment on the family’s situation but that in general cases are handled individually, and U.S. officials try to facilitate legitimate travel to the United States while protecting national security.

“These are not easy questions,” he said. “We’ve got a lot of foreign service officers deployed all over the world that are making these decisions on a daily basis, and they are trying very hard to do the right thing at all times.”

Immigration attorneys estimate tens of thousands of people have been affected by what they call blanket denials of visa applications under Trump’s travel ban, which the U.S. Supreme Court upheld in a 5-4 ruling in June.

The waiver provision allows a case-by-case exemption for people who can show entry to the U.S. is in the national interest, is needed to prevent undue hardship and would not pose a security risk.

But a lawsuit filed in San Francisco says the administration is not honoring the waiver provision. The 36 plaintiffs include people who have had waiver applications denied or stalled despite chronic medical conditions, prolonged family separations or significant business interests.

“We hope this case makes the administration realize the waiver process is not working,” Elkarra said. “Thousands of families have been split apart, including families who have loved ones who are ill and are not able to see them in their final hours. I’m sure there are more cases like this.”

In addition to the waiver, the government gave Swileh a visa that will allow her to remain in the United States with her husband and begin a path toward U.S. citizenship, Elkarra said.