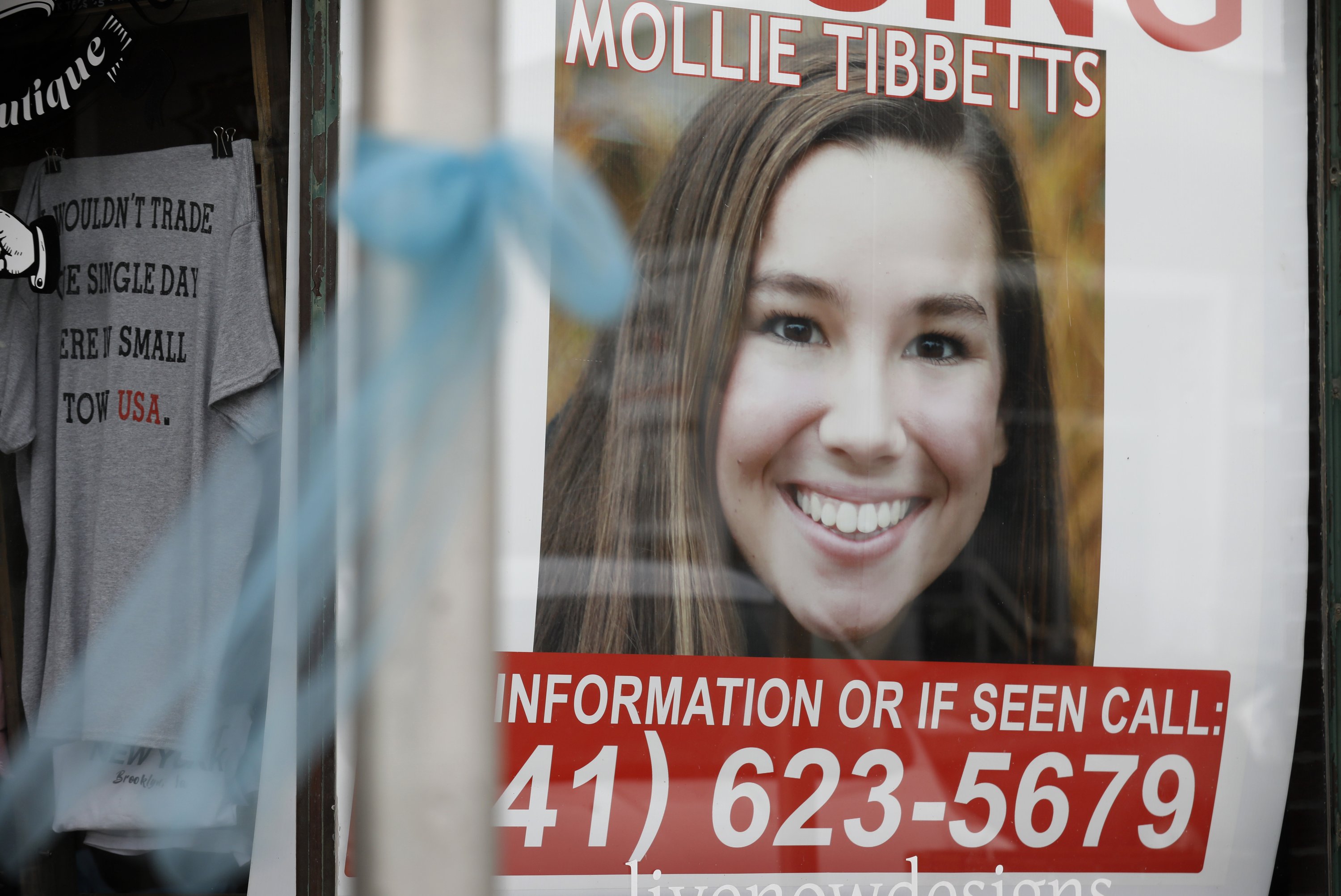 IOWA CITY, Iowa — Before investigators arrested a farmhand in the death of Iowa runner Mollie Tibbetts, they scrutinized a neighbor seen washing his car hours after she vanished, an acquaintance who erased his cellphone data, a Nebraska man who ditched his vehicle nearby and a farmer with a history of stalking women.

Newly unsealed search warrants reviewed by The Associated Press reveal that four men were the subject of police interest at times during the five-week search for the missing 20-year-old University of Iowa student. The documents provide new details about how Tibbetts’ July 18 disappearance in the town of Brooklyn, Iowa, stumped agents as the mystery became the focus of national media coverage and one of the largest investigations in state history.

The suspect ultimately charged in Tibbetts’ death, Cristhian Bahena-Rivera, did not come on their radar until shortly before he allegedly led them to her body in a cornfield in August.

Investigators say Rivera, 24, followed Tibbetts in a car and then on foot as she was out for an evening run, kidnapped her after a struggle and stabbed her to death. Rivera was identified as a suspect after officers found surveillance footage showing a Chevy Malibu that they later linked to him. Rivera, who is scheduled to stand trial, is a Mexican national who was allegedly in the U.S. illegally .

Before then, investigators had focused attention on four others in the suspected kidnapping based on circumstances and seemingly suspicious behavior. They faced police interviews, searches of their vehicles and property and scrutiny of their cellphone data before agents determined they had nothing to do with Tibbetts’ disappearance.

“It was not a fun thing to go through, that’s for sure,” said Tim Tometich, 42, who lives along the running route where Tibbetts was last seen. “But we all wanted her found and home safe and obviously understand they had a job to do and needed to track down every lead they had.”

Tometich drew attention after agents obtained surveillance footage from a Brooklyn car wash showing him washing a dark-colored SUV at 10:30 p.m. on July 18, hours after Tibbetts vanished. But he told investigators that he wasn’t at the car wash until three days later and that his credit card information would show that. A state agent seeking a warrant to obtain Tometich’s phone data alleged that claim was “untruthful” based on video and business records. Tometich declined comment on that.

All the men were later ruled out as suspects through further investigation, said Mitch Mortvedt, assistant director of the Division of Criminal Investigation.

“In any investigation we come across people who raise an eyebrow to us. They have absolutely nothing to do with the issue we’re investigating, but their behavior draws your attention for a short amount of time,” he said. “There was a handful of those scattered throughout the five weeks.”

Rivera’s attorney, Chad Frese, said he’s aware of the individuals described in the warrants but that it’s premature to comment on defense strategy.

Mortvedt said the farmer was of interest longer than others, in part because he gave multiple attention-grabbing media interviews in which he denied involvement but acknowledged his criminal history. He allowed agents to question him and search his home and property outside of Brooklyn, about 200 yards (182 meters) from where investigators determined that Tibbetts’ cellphone dropped off the network.

The investigation was driven by technology from the beginning. Tibbetts’ phone records indicated that her rate of movement on a rural road near Brooklyn sped rapidly, as if she went from running to traveling in a car. Investigators then obtained a warrant requiring Google to provide data showing which users could be tracked to that vicinity.

One of four such Google customers was a 17-year-old who was Facebook friends with Tibbetts. The teen’s brother was on the same construction crew as Tibbetts’ boyfriend, who was out of town when she vanished, so investigators assumed he may have known Tibbetts was home alone. The teen told agents he was at home July 18, but later said he may have been mowing a cemetery. He raised suspicion when he told agents that he had recently “wiped” his smartphone of all stored data and didn’t have it on him.

The focus of intense interest early on was a 58-year-old Stanton, Nebraska man, who arrived at a car dealership 30 miles (48 kilometers) east of Brooklyn on July 20. The man told a salesman that he was driving to visit a foreign girlfriend while she was in Indiana but that his 1989 Chevy Grand Marquis was having transmission trouble, according to search warrant materials. He bought a used car for $3,500 and left the Chevy there, taking its license plates and a small bag with him. He said he would be back for the Chevy — which a witness said resembled a suspicious vehicle she saw near Tibbetts’ home on July 18 — but didn’t leave contact information.

Agents searched the vehicle after seeing a reddish spot in the backseat. They found hairs, including dark ones that they thought could have belonged to Tibbetts, and sent them to the crime lab for examination. They obtained warrants for information from the man’s two Facebook accounts, one of which liked the pages of dozens of scantily clad female athletes and models.

But Mortvedt said nothing in the car tied him to Tibbetts, and the man was ruled out as a suspect.

“Once we started to dive into a few of them, everybody as a team felt confident that we were safely eliminating them,” he said.