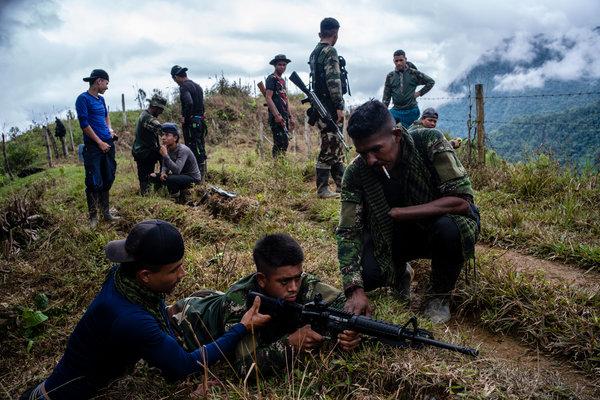 The president said Walter Arizala was killed during a “heroic operation” earlier in the day after a months-long, U.S.-backed manhunt that followed the kidnapping and murder of three Ecuadorian press workers in the turbulent border area.

Many Colombians “can now sleep peacefully because one of the most horrendous criminals our country has ever known has fallen,” Duque said in a televised address.

Arizala, better known by his alias Guacho, was by some accounts the most-wanted fugitive among Colombia’s sprawling criminal underworld.

He led a small holdout faction of a few dozen guerrillas from the former Revolutionary Armed Forces of Colombia that was behind a rising wave of drug-related violence, including the March kidnapping of three newspaper workers from Ecuador’s El Comercio newspaper who were later found slain.

Arizala’s troops also are believed to have been behind the slaying of three Colombian judicial workers in July, as well as a spate of civilian kidnappings and car bombings against military facilities in Ecuador.

Authorities provided few details about how Arizala was killed except to say that he was taken out along with a close confidant in an operation codenamed Perla IX carried out by a special forces unit.

Chief prosecutor Nestor Martinez released a blurry photo of Arizala, smiling and wearing a baseball cap, that he said was taken during an undercover surveillance operation carried out in recent weeks.

Arizala’s Oliver Sinisterra Front has its base of operations in Colombia’s volatile Narino state, which is home to Colombia’s largest harvest of illegal coca crops. Land dedicated to production of the raw ingredient used to make cocaine skyrocketed last year to 807 square miles (209,000 hectares) — the largest amount on record, according to a recent White House report.

Arizala, 29, was a mid-range FARC commander who joined the rebel group as a teenager. He initially joined in the peace process aimed at ending a half-century of political warfare in Colombia, but deserted and returned to the jungle last year where he is believed to have established a brisk business smuggling cocaine to Mexican drug cartels.

Authorities attribute at least 15 deaths to the group.

Duque, who has tried to portray himself as a law and order leader in the mold of his mentor, former President Alvaro Uribe, held up Arizala’s death as a war trophy, saying his conservative government would spare no effort in protecting Colombians from criminal activity.

Still, some cautioned against overly celebrating the battlefield victory at a time of rising violence throughout Colombia’s countryside even after thousands of FARC rebels laid down their weapons.

Jose Miguel Vivanco, the director for the Americas at Human Rights Watch, said the historically neglected Afro-Colombian population around the Pacific Ocean port city of Tumaco near where Arizala was killed remains remains highly vulnerable to recruitment by criminal groups.

“The residents of Tumaco, who have suffered for years and years the abuses committed by multiple actors, need much more than the removal of Guacho for violence not to be recycled again,” he said on Twitter.

Meanwhile, Ricardo Rivas said he regretted that Guacho died without revealing how his brother, Ecuadorian photographer Paul Rivas, was killed.

“I don’t think the death of another human being is something we should celebrate,” Rivas told Colombia’s Blu Radio.