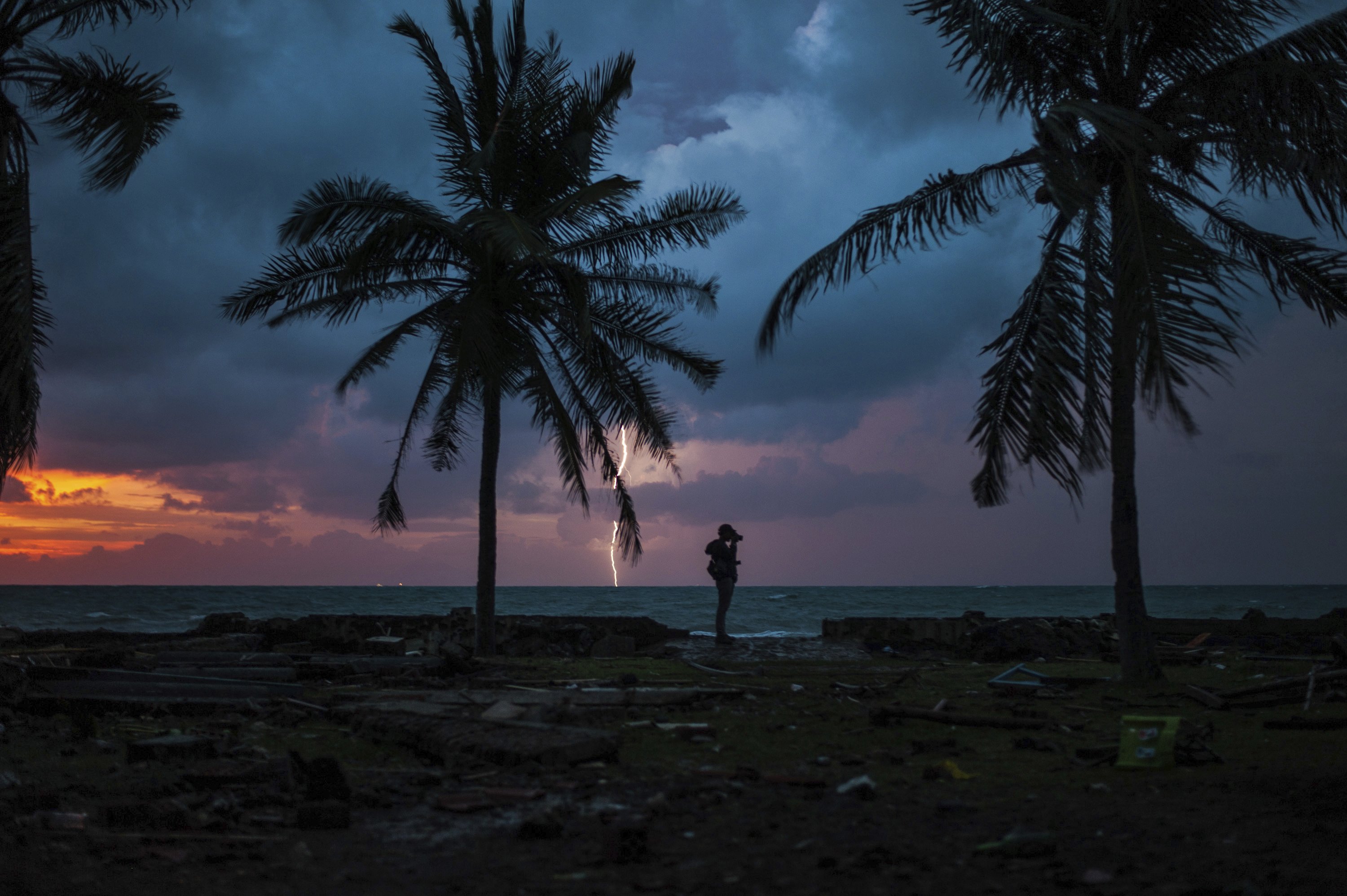 SUMUR, Indonesia — Indonesian authorities asked people near an island volcano to avoid the coast while eruptions and weather and sea conditions were being monitored for tsunami risks.

A tsunami that followed an eruption of Anak Krakatoa hit communities along the Sunda Strait on Saturday night, killing more than 420 people and displacing thousands. The eruption is believed to have set off a landslide on the volcano’s slopes, displacing the water that then slammed into Java and Sumatra islands.

“All these conditions could potentially cause landslides at the cliffs of the crater into the sea, and we fear that that could trigger a tsunami,” she said at a news conference. She asked that communities remain vigilant but not panic.

The tsunami Saturday night struck without warning, taking people by surprise even in a country familiar with seismic disaster. No big earthquake shook the ground beforehand, and it hit at nighttime on a holiday weekend while people were enjoying concerts and other beach and resort activities.

People in Sumur village, which has been slow to receive aid due to roads being cut off, remained stunned by how quickly the tsunami hit. The beach, located just a few kilometers from the tourist island of Umang near Java’s western tip, is popular for snorkeling and other water activities. The tsunami decimated the area, ripping houses from their foundations and bulldozing concrete buildings.

Scientists have said the tsunami’s waves were recorded in several places at about 1 meter (3.3 feet) high, but residents of Sumur insisted they towered more than 3 meters (10 feet) there. They said a soaring white wall of water roared toward them at high speeds, ripping trees out of the ground by their roots.

“There was no sign of a tsunami when we were at the beach. The sea didn’t recede,” said Tati Hayati, a housewife, who was enjoying a pleasant evening with 10 other people when the disaster hit. “It was calm and bright with the full moon.”

When she spotted high, fast-moving waves launching toward the shore, she ran to her car and managed to get inside. But she couldn’t outrun it. She said the car was struck by three waves, breaking out the back window and filling the vehicle with gushing water.

“We were locked inside. The car was swaying in the waves and we thought we would all die,” Hayati said. “We almost could not breathe and I almost gave up when I groped the key in the water and managed to open the door, and the water began to recede. We got out of the car and ran to safety.”

More than 16,000 people were displaced from their homes and heavy equipment was urgently needed in the Sumur subdistrict near Ujung Kulon National Park to help get aid flowing and reach people who may be injured or trapped, said Sutopo Purwo Nugroho, spokesman for Indonesia’s Disaster Mitigation Agency.

Anak Krakatau, or Child of Krakatoa, formed in the early 20th century near the site of the cataclysmic 1883 eruption of Krakatoa, which killed more than 30,000 people and hurled so much ash that it turned day to night in the area and reduced global temperatures.

Anak Krakatau has been erupting since June and did so again 24 minutes before the tsunami, according to the geophysics agency.

Saturday’s disaster came ahead of the anniversary of the massive Asian tsunami that hit Dec. 26, 2004, after a magnitude 9.1 earthquake off Sumatra island spawned huge waves. The giant wall of water killed some 230,000 people in a dozen countries, most of them in Indonesia.