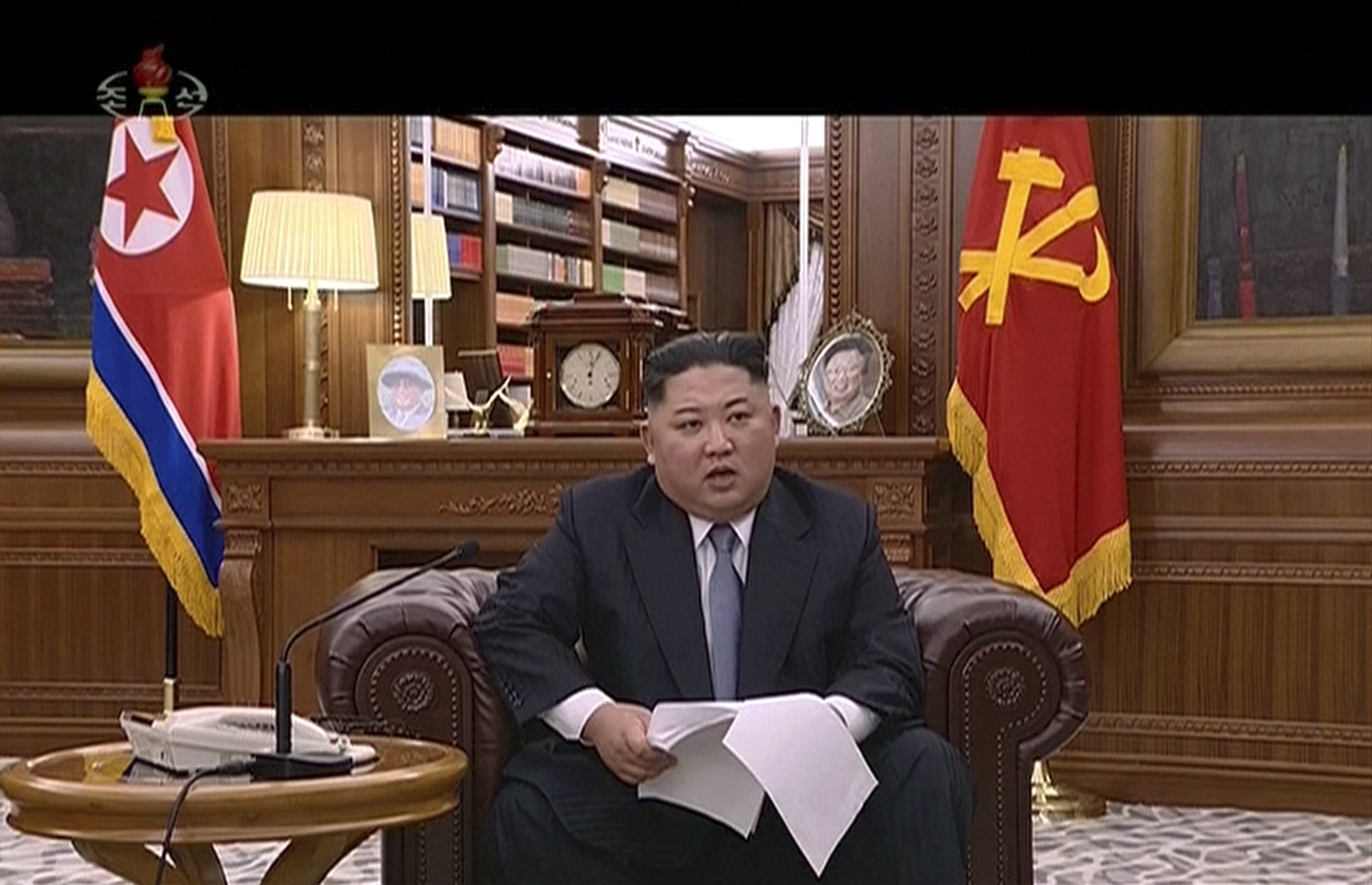 The North Korean leader’s big curtain-raiser for 2019 comes after a couple of very tumultuous years. In 2017, his rapid-fire missile tests brought him to the brink with President Donald Trump and 2018 saw his sudden rise on the world stage with hints of detente, summits with China and South Korea and an unprecedented meeting with Trump in Singapore.

What’s ahead in 2019? Here are four big takeaways.

1. IT’S STILL ABOUT THE ECONOMY

About two-thirds of the entire speech was devoted to the economy.

Kim last year jettisoned his signature slogan of “simultaneous tracks” — developing nuclear weapons and the economy at the same time — in favor of claiming to focus everything on the economy, which is now the national buzz phrase.

Kim hasn’t given up on his nuclear weapons, he just says he has perfected the arsenal enough to shift the focus of “socialist construction” elsewhere. Kim also didn’t commit to anything in the speech like the kind of major, structural economic changes that might generate sustainable growth, but which could also undermine his own power.

Even so, he does appear to genuinely want to boost the standard of living of his nation and to grow the country’s economy. He underscored that desire by calling for an increased electricity supply and pointed to the possibility of developing nuclear power, along with the need for modernization and innovation across the board.

Despite repeated mentions during the speech of the North’s cherished principle of “Juche,” or self-reliance, Kim understands his country’s economic realities. He is openly seeking more foreign investment and trade.

And he’s hoping to enlist Seoul’s help in that endeavor.

1. KIM WANTS THE KOREAS TO BE TAKING THE LEAD

Though the attention was on his relationship with Trump, Kim’s biggest moves in 2018 were toward South Korea.

Kim’s pitch has been that it is high time Pyongyang and Seoul were leaders in determining their own fate, which is also a shot at the role of the United States on the peninsula.

Addressing both nations at once, he called on all Koreans to — in his decidedly North Korean manner — to “uphold the slogan “Let’s usher in a heyday of peace, prosperity and reunification of the Korean Peninsula by thoroughly implementing the historic North-South declarations!”

Those declarations include a good deal of joint efforts to help Kim with his economic goals, including the renovation and reconnection of the North’s railways to the South. He said he would support the reopening of an industrial park that relies on South Korean capital investments and a tourism zone on the North’s Mount Kumgang, or Diamond Mountain.

Such efforts can’t go very far until sanctions are lifted. Seoul is a lot more willing to forge ahead than Washington.

Pyongyang is also seeking an end to joint U.S.-South Korea military exercises, while Washington is pushing the South to pay more of the cost of keeping its troops there.

The growing Washington-Seoul discord is an added bonus for Kim.

Expect him to keep pushing those buttons.

In the most tantalizing sentence of the speech, Kim hinted at a possible cap on nuclear weapons production if the U.S. takes equivalent steps, whatever that might mean.

Both areas need to be further clarified in negotiations.

Kim’s calculus has never been to throw away his nuclear arsenal and hope for the best from a newly friendly and supportive administration in Washington. It has from the start been an effort to play the nuclear hand to its greatest advantage.

Kim sees nuclear weapons as a valuable deterrent to a U.S. military strike. Unless that threat is eliminated, he won’t give them up. He also believes his weapons put him in a position of strength from which he can make demands and extract concessions.

The North has been pretty clear about these points. But Kim spelled them out once again.

His message to Trump: Start addressing his concerns about security and sanctions relief soon or he will have no choice but to try a different, less friendly approach. And he is warning that he will be able to make a case to China, Russia and possibly even Seoul that if things fall Washington will be the one to blame.

1. KIM WANTS TO BE SEEN AS HIS OWN MAN

This year’s 30-minute speech was an exercise in making Kim look worldly, firmly in charge and comfortable in his own skin — as opposed to the caricatures of him that are so popular in the West.

Though not a stirring public speaker, Kim confidently delivered the pre-recorded address in a study with dark-wood paneling and the national and ruling party flags.

He was flanked by big portraits of his charismatic grandfather, national founder Kim Il Sung, and his father, the late leader Kim Jong Il, who was famously speech-averse and never spoke like this on New Year’s.

That lineage is as important as ever.

But the images beamed to the nation and to the world Tuesday of Kim delivering the speech were engineered to have a freshness to them that is uniquely his — and to leave the impression that Kim Jong Un is his own man, a modern, respectable leader who belongs on the world stage.

He may very well be sharing that stage next with Trump, for their second summit.