Giuliani: ‘Mueller should be investigated for destruction of evidence’ 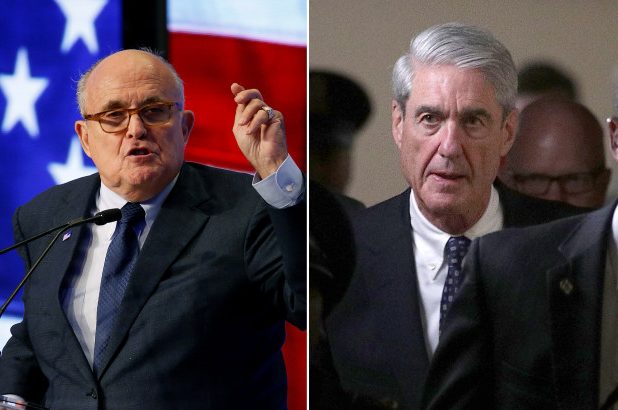 Rudy Giuliani, President Donald Trump’s lawyer, is calling for an investigation of special counsel Robert Mueller over claims of the destruction of FBI evidence in his probe into alleged collusion between Trump and Russia.

“Mueller should be investigated for destruction of evidence for allowing those text messages from [Peter] Strzok to be erased, messages that would show the state of mind and tactics of his lead anti-Trump FBI agent at the start of his probe,” Giuliani told Hill.TV on Dec. 27.

Giuliani’s criticism comes after a Dec. 13 report released by the DOJ Inspector General, which says the text messages were not fully preserved because of a “technical glitch.” The texts in question come from Peter Strzok and Lisa Page, two FBI officials who were involved in a romantic relationship and who, based on previous text messages, were strongly anti-Trump. The text messages that were recovered involve talks about a “media leak strategy” and saying they would “stop” then-candidate Trump from becoming president.

Strzok was fired from the FBI in August. Despite an investigation, the FBI decided that Strzok and Page’s affair and anti-Trump bias did not play out in the way they conducted their investigation, and thus no further action was taken.

While Giuliani’s accusation that Mueller and his team deleted the text messages may be a stretch, is certainly isn’t totally out of the imagination. The Mueller probe recovered some 19,000 texts prior to Mueller’s appointment, but the “IG said it was unable to recover messages from the time Strzok and Page worked for Mueller’s office in spring and summer 2017 because the memories of both FBI officials’ government phones were wiped clean by technicians,” The Hill reported. There is not a world where this is not troubling.

Regardless of how troubling the news is, the reality is the entire Mueller probe’s legitimacy has dwindled. Even if miraculously Mueller is able to find evidence of collusion with the Russians, there are few that would consider the investigation legitimate. His clock has been ticking for a long time, and everyone is Washington is just about ready to pack his bags.