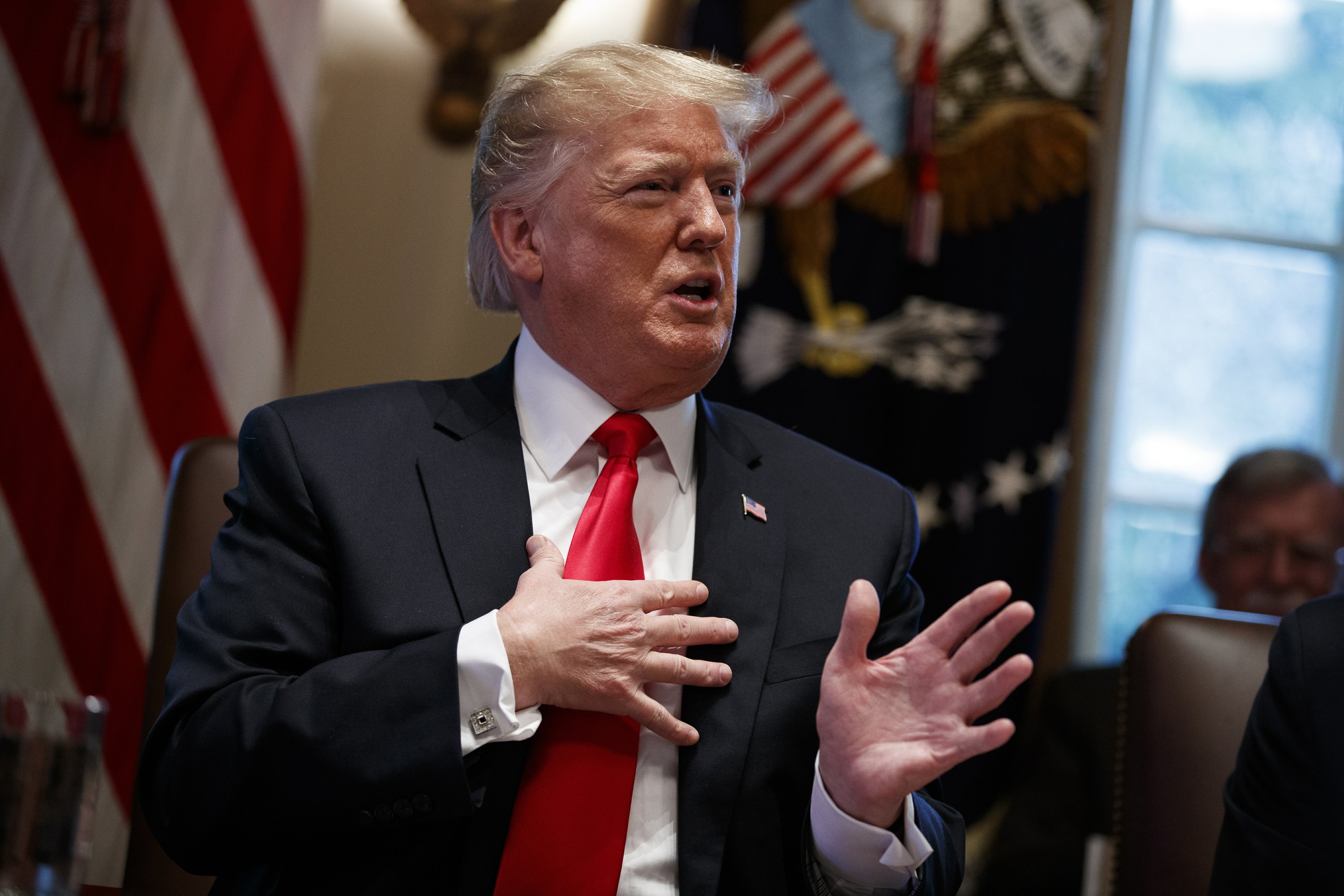 WASHINGTON — Home alone no more, President Donald Trump had a lot to share when he convened a rambling Cabinet meeting on Day 12 of the government shutdown.

The president, eager for company after a lonely stretch in a near-empty White House, zigzagged for more than 90 minutes from his demands for a southern border wall to his thoughts on Kanye West and his decision to pull troops out of Syria — all while a mock movie poster with his photograph and the words “SANCTIONS ARE COMING, NOVEMBER 4” sat, without explanation, in the middle of the grand Cabinet Room table.

It was Trump’s first public appearance in nearly a week, after being holed up in the White House for Christmas and New Year’s. Trump had been scheduled to spend the holidays with his family at his private Mar-a-Lago club in Palm Beach, Florida, but canceled the trip to wait out the partial government shutdown that began Dec. 22.

“You know, I was in the White House all by myself for six, seven days. It was very lonely. My family was down in Florida,” Trump recounted. He described channel-flipping and watching a different network — PBS — to fill the time.

“I felt I should be here just in case people wanted to come and negotiate the border security,” Trump explained.

Later, he talked about his Christmas “all alone,” with no one around except for the “machine gunners.”

“I was all by myself in the White House — it’s a big, big house — except for all the guys out on the lawn with machine guns,” Trump said, referencing the Secret Service and military personnel who guard the White House year-round.

“I was waving to them. … These are great people. And they don’t play games. They don’t, like, wave. They don’t even smile,” he said. “I was hoping that maybe somebody would come back and negotiate. But they didn’t do that.”

It had indeed been a slow holiday stretch, minus a flurry of presidential tweets. The White House did not send out a formal public schedule; the doors to the White House press shop were often locked; and West Wing offices sat dark as Christmas and New Year’s ticked by.

While some White House staffers were out for the holidays, others were prevented from reporting to work because of the partial government shutdown that is now affecting hundreds of thousands of federal workers.

According to the plan filed by the deputy White House chief of staff for operations with the budget office before the shutdown, more than 1,000 of 1,759 staff members in the Executive Office of the President were expected to be placed on furlough. That includes 156 of 359 White House Office staff, 18 of 19 of those who work in the Office of the Vice President, and all 58 National Security Council staffers.

But senior aides, as well as many Cabinet members, were back at work Wednesday and in the room as the president held court on the shutdown and much, much more. The shutdown, he said, will last “as long as it takes.” On his decision to pull out of Syria, he explained, “We’re talking about sand and death.” And as for his favorite rapper, Trump enthused: “Even Kanye West came out today and said great things about Trump.”

He also took a shot at his former defense secretary Jim Mattis, who resigned last month, saying he wasn’t happy with the job Mattis had done in Afghanistan.

“I mean, I wish him well,” said Trump, “But, as you know, President Obama fired him and, essentially, so did I. I want results.”

As the meeting stretched past the hour mark, Cabinet secretaries shifted in their seats as they took their turns speaking. At one point, Energy Secretary Rick Perry appeared to be playing mock piano on the arm of Small Business Administrator Linda McMahon’s chair.