The Latest: Youngsters join in as Pelosi takes speaker oath 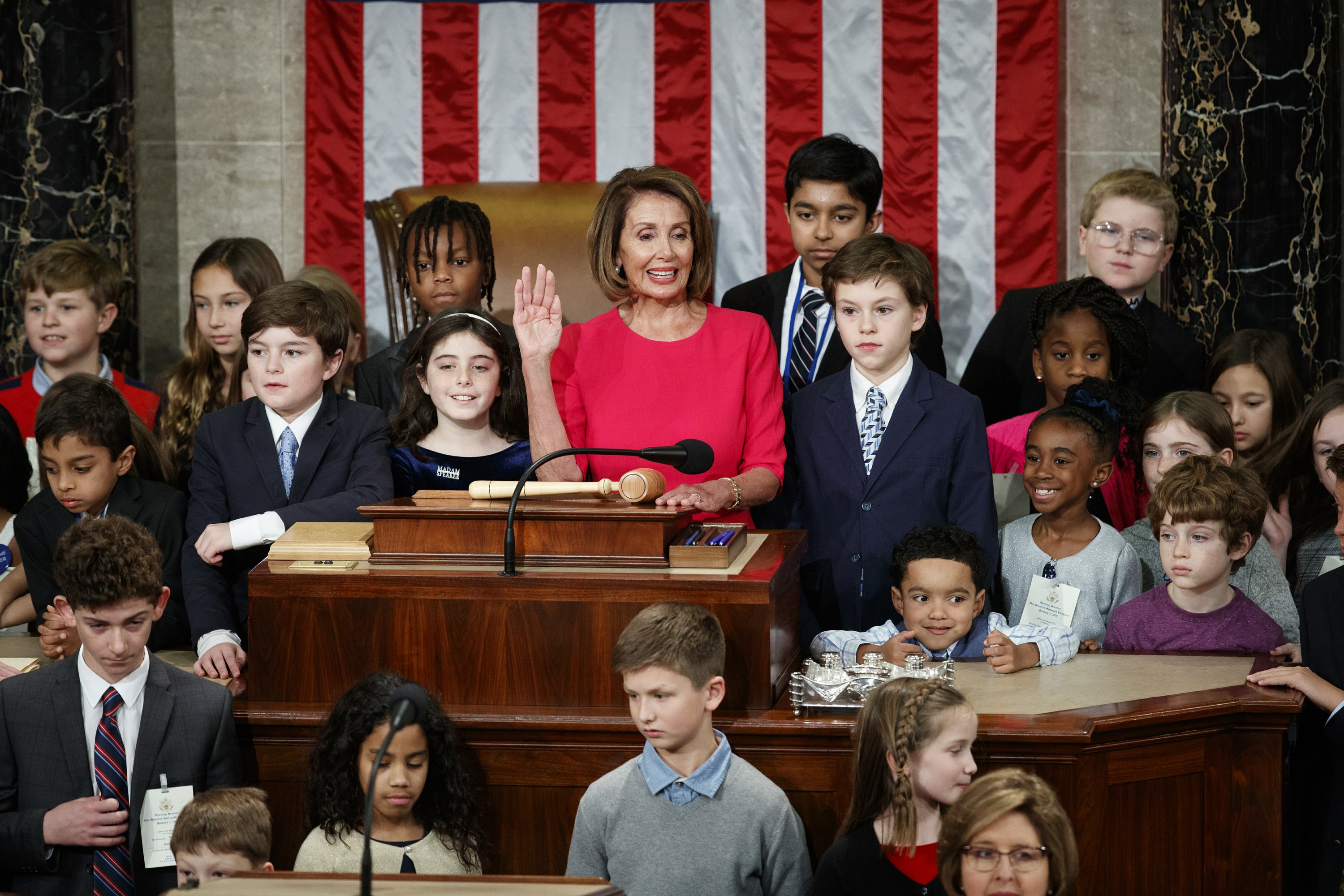 WASHINGTON — The Latest on the 116th Congress (all times local):

Nancy Pelosi (puh-LOH’-see) called for kids to join her as she was sworn into as House speaker.

Pelosi said on Thursday: “I now call the House to order on behalf of all of America’s children.”

Pelosi invited her grandchildren to come to the speaker’s podium, and then said other children in the chamber were welcome to join them.

It was reminiscent of the scene eight more than a decade ago when Pelosi was first elected speaker. She had served as speaker from 2007 to 2011 before Republicans took back control of the House.

Bennett, who marched for civil rights, was one of several people who sat in Pelosi’s official speaker’s box. He waved when Pelosi mentioned him.

Others on Pelosi’s guest list included her family, Mickey Hart of the Grateful Dead and Tim Gunn of the TV reality show “Project Runway.”

Her guests cheered and hollered as she was sworn in and took the gavel. They laughed when the California delegation sang “California, here we come” and followed Pelosi down the center aisle.

House Speaker Nancy Pelosi (puh-LOH’-see) is laying out her agenda for the new Democratic majority, saying the American people have “demanded a new dawn.”

In her first remarks after winning election as speaker, Pelosi says the House must fight for the middle class in way that’s fair and financially sound while also protecting Medicare, Medicaid and Social Security.

She says the House must also address climate change, which she calls “the existential threat of our time.” The California Democrat says the American people understand the urgency of addressing global warming and “the Congress must join them.”

Pelosi also says that Democrats will also pursue legislation to lower health care and prescription drug costs and work to rebuild the country with “green and modern infrastructure from sea to shining sea.”

Fifteen Democrats have defected but it wasn’t enough to keep Nancy Pelosi (puh-LOH’-see) from being elected House speaker.

The veteran Californian won the House’s top post Thursday with 220 votes. That’s two more than she’d have needed if all the chamber’s 435 members had voted.

Pelosi got the job after an election that saw Democrats gain 40 seats in the November elections.

A significant number of her party’s candidates pledged to not back her for speaker after years of Republican ads casting her as a dangerous liberal. Pelosi clinched her election last month after promising to serve no more than four more years in the job.

Of the 15 Democrats who didn’t support Pelosi, 10 were incoming members. Twelve backed other Democrats and three voted “present.”

GOP Rep. Kevin McCarthy of California got 192 votes, all from Republicans.

The House has elected Nancy Pelosi as its speaker as Democrats take command of the chamber for the new Congress.

The near party-line majority vote makes her the country’s most powerful Democrat as the party begins two more years of confronting President Donald Trump. Except now, Pelosi’s Democrats will be able to set the House’s legislative agenda and conduct investigations of the Trump administration that Republicans shunned when they held the majority.

Thursday’s vote restores Pelosi to the post the Californian held from 2007 until 2011. She’s the only woman to ever hold the chamber’s top job.

Pelosi, of California, reclaimed the job after Democrats gained 40 seats in the November elections, their biggest pickup in four decades.

The Senate of the 116th Congress has been sworn in.

The new senators mingled with their colleagues and a few predecessors as they walked up to the dais in groups of four to be sworn in by Vice President Mike Pence on Thursday. New senators found their desks, some looking inside to see which senators had left their signatures.

The only new senator not to be sworn in was Republican Sen.-elect Rick Scott, who received permission to complete his term as Florida’s governor. He will be sworn in Jan. 8, when his term ends.

Twenty-nine new and re-elected senators were sworn in. They included Sens. Martha McSally and Kyrsten Sinema (SIN’-uh-muh), who ran against each other. McSally lost to Sinema but was appointed to replace the late Sen. John McCain.

The new Democratic-led House has begun voting on who will serve as the next speaker.

Rep. Nancy Pelosi (puh-LOH’-see) of California is expected to win, retaking a post she held for four years until January 2011. She has been serving as minority leader ever since.

Pelosi all but ensured her election by agreeing to limit her tenure to no more than four years in the chamber’s top spot. Some Democrats have been calling for new leadership in the caucus.

There are 235 Democrats in the House and 199 Republicans, with one vacancy.

Republicans are expected to largely vote for Rep. Kevin McCarthy of California.

If no candidate receives the majority of votes on Thursday, the roll call vote is repeated until a majority is reached and the speaker is elected.

House Democratic leader Nancy Pelosi of California has been nominated to serve as speaker of the Democratic-led House.

Rep. Hakeem Jeffries of New York placed Pelosi’s name in nomination, saying she has a “track record of success unparalleled in American history,” citing her work on the landmark health care law approved when she previously served as speaker from 2007 to 2011.

Jeffries on Thursday called Pelosi a “legendary legislator” and said House Democrats were “down with NDP, Nancy D’Alesandro Pelosi.”

Pelosi has served as Democratic leader in the House since 2003.

The House and the Senate have convened for the 116th Congress with the most diverse class of lawmakers in history.

The House is returning the first woman to the speaker’s office as Democrats take the majority with a large class of freshman lawmakers. They’re ready to confront President Donald Trump in a new era of divided government, with Republicans still controlling the Senate.

It’s also the first new Congress to convene during a partial government shutdown, now in its 13th day over Trump’s demands for money for a southern border wall.

Democratic leader Nancy Pelosi is pledging broadly to make Congress work for all Americans. But her party is also ready to challenge Trump with investigations that threaten the White House agenda.