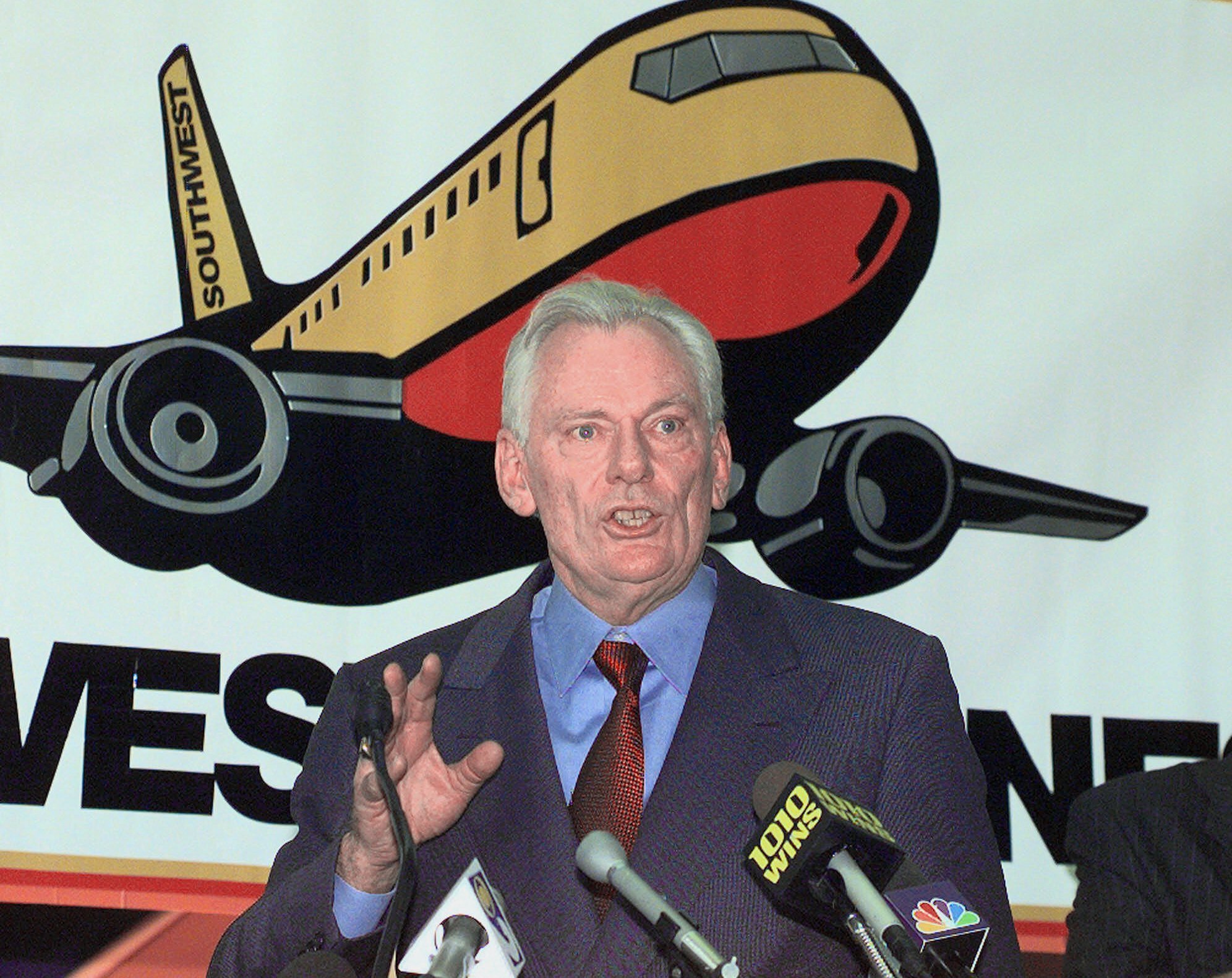 DALLAS — Not many CEOs dress up as Elvis Presley, settle a business dispute with an arm-wrestling contest, or go on TV wearing a paper bag over their head.

Herb Kelleher did all those things. Along the way, the co-founder and longtime leader of Southwest Airlines also revolutionized air travel by practically inventing the low-cost, low-fare airline.

Kelleher died on Thursday. He was 87. Southwest confirmed his death but did not indicate the cause.

In the late 1960s, the nation’s airlines were a clique of venerable companies that offered onboard dining, movies and other amenities to make flying pleasant but pricey. Fares approved by federal regulators made air travel a luxury that few could afford.

Kelleher was a lawyer in San Antonio in 1967 when a client, Rollin King, came to him with the idea for a low-fare airline that would fly between San Antonio, Dallas and Houston. Kelleher guided Southwest through a thicket of legal obstacles thrown up by other airlines, and the new carrier began flying in 1971.

Southwest kept costs low. It flew just one kind of plane, the Boeing 737, to make maintenance simpler and cheaper. It gave out peanuts instead of meals. There were no assigned seats. It operated from less-congested secondary airports to avoid money-burning delays.

Southwest turned a profit in 1973 and hasn’t suffered a money-losing year since — a streak unmatched in the U.S. airline business.

Kelleher became Southwest’s chairman in 1978 and CEO in 1982, as federal regulation of airline prices was disappearing. He led the company through its period of greatest growth. As Southwest entered new cities, it forced other airlines to match its lower prices. Federal officials dubbed this “the Southwest Effect.”

Today, Southwest carries more passengers within the United States than any airline. While critics say Southwest has come to resemble the bigger carriers that it once fought against, it created a model of streamlined operations, low costs and lower fares that spawned similar airlines around the world.

If Southwest was different, so was its garrulous CEO — a wisecracking chain smoker who bragged about his fondness for Wild Turkey bourbon whiskey.

Kelleher was so outgoing that it would take him ages to walk through an airport — he seemed to stop every few feet to chat with employees and passengers. He had a booming laugh, a bottomless trove of anecdotes, and a lawyer’s precise way with words.

Kelleher showed a flair for wacky marketing antics. When Braniff tried to drive Southwest out of business by undercutting its fares — prices that ensured both airlines would lose money — Kelleher offered a bottle of liquor to anyone who bought a full-fare Southwest ticket. Kelleher said that business travelers with expense accounts and a thirst for booze made Southwest the biggest liquor distributor in Texas for a time.

When Southwest and a smaller aviation company both claimed the same advertising slogan, Kelleher proposed to settle the dispute by holding an arm-wrestling contest with the other CEO. Kelleher, clenching a lit cigarette between his teeth, lost the match, but the victor — impressed by the publicity the stunt generated — let Southwest keep using the tagline.

As Southwest added service to more cities, executives of other airlines — and some of their passengers — dismissed Southwest as a cattle-car operation for cheap travelers. Kelleher answered with a TV commercial in which he wore a paper bag over his head and promised to give the bag to any customer who was too embarrassed to be seen flying on his discount airline.

The TV ads and the Elvis costumes helped make Kelleher the public face of Southwest and probably the most recognized person in the airline industry.

In 1999, at age 68, Kelleher was diagnosed with prostate cancer. He kept working, commuting between Southwest’s Dallas headquarters and a hospital in Houston, but the incident added urgency for a succession plan.

In 2001, Kelleher stepped down as CEO and president, and he retired as chairman in 2008. Even after leaving, he remained on the payroll and went to the office regularly.

In a 2011 interview with The Associated Press, Kelleher said his proudest achievement was that Southwest — in an industry that cut tens of thousands of jobs in the decade after 2001 — never laid off workers.

In a statement Thursday, Southwest said, “Herb was a pioneer, a maverick, and an innovator. His vision revolutionized commercial aviation and democratized the skies.”

T. Boone Pickens, the oilman and fellow legendary Texas business figure, tweeted, “Herb Kelleher is arguably the most transformative figure and character in the history of modern aviation. He is the epitome of the can-do entrepreneurial spirit.”

Herbert D. Kelleher was born in Haddon Heights, New Jersey, and got his first job — for $2.50 a week — making sure that copies of the Philadelphia Bulletin newspaper were delivered. He graduated from Wesleyan University and earned a law degree from New York University in 1956.

Kelleher is survived by his wife, Joan, and three of their four children.