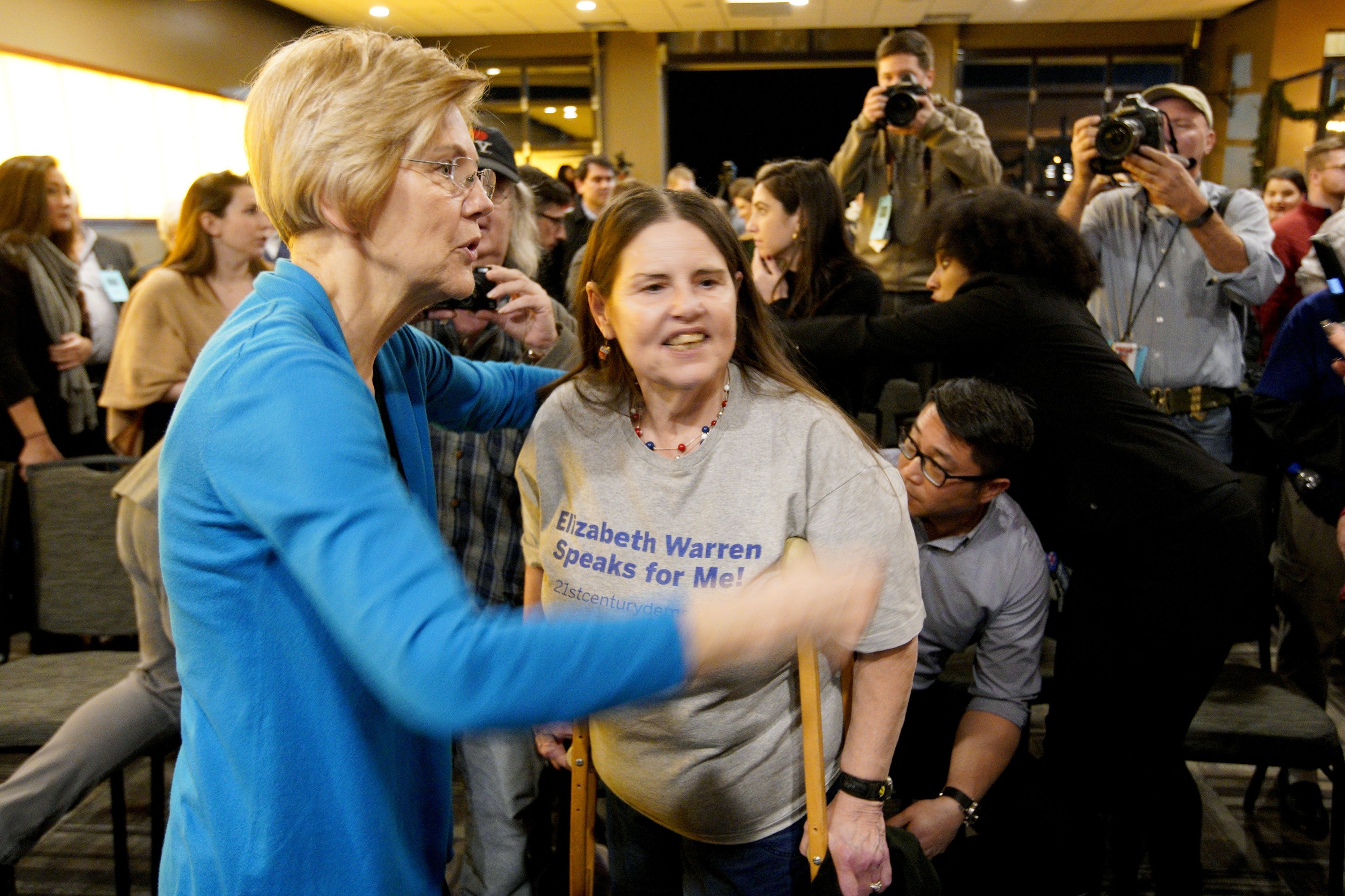 COUNCIL BLUFFS, Iowa — Democratic Sen. Elizabeth Warren of Massachusetts strode into Iowa Friday with all the look of a presidential candidate, igniting pent-up Democratic frustration with her brand of fiery liberalism in the premier caucus state.

“It’s time to dream big and fight hard, not just for those at the top, but for an America that works for everyone,” Warren told about 500 in western Iowa Friday evening.

Warren made her Iowa debut calling for economic fairness in front of a cheering crowd of Iowa and Nebraska Democrats at a Council Bluffs, Iowa, bowling alley. She was scheduled to continue by holding public events Saturday and Sunday in western and central Iowa theaters, community centers and bars.

Warren has been an emerging national figure for more than a decade as an advocate for consumer protection, now a senator and a regular target of President Donald Trump. But this trip offers the first glimpse of what the likely Democratic presidential candidate will look like in that role.

She appeared to relish the transition from the outset.

“This is where it begins, person-to-person, town-to-town, across Iowa and across the country,” she said, igniting cheers. “We’re going to build a grassroots movement.”

She also signaled a potential point of conflict within the Democratic primary field, suggesting billionaire candidates would not represent the party well if they used their personal wealth to help finance their campaigns. Billionaires including environmentalist Tom Steyer and former New York Mayor Michael Bloomberg are weighing 2020 Democratic candidacies. Steyer plans to visit Iowa Wednesday.

“I think that campaigns should not be for sale,” she said. “Whether we’re talking about super PACs or self-funding as Democrats in a primary.”

For someone known for her ability to rouse crowds with her takedowns of Wall Street and Trump, Warren ignited her audience in Iowa by promising, in her trademark style, to “persist.”

Despite the friendly reception, retired teacher Carla Hawkins was far from ready to commit.

“I’m ready for something good, something better,” the Council Bluffs Democrat said. “But I still don’t know enough about Sen. Warren. And there are so many others looking into it. It’s too early for me to say.”

High school senior Maggie Bashore said she was curious, but looking for someone younger than Warren, who is 69.

“We need somebody who is focusing on our generation,” Bashore said. “We need someone who knows we’re going to be the ones taking care of the planet.”

Warren will have the chance to forge more personal connections with the state’s activists and powerbrokers, starting Saturday with about 20 Democratic activists at a private home in central Iowa and Sunday at a Des Moines cafe.

“I’d like to see how she deals with people one-on-one, that interaction between her and regular folks,” said Jan Bauer, the Story County Democratic chairwoman, who planned to attend the private event with Warren Saturday.

Though Warren announced the formation of a presidential exploratory committee Monday, Friday’s event had all the trappings of a full-throttle presidential campaign.

Having recently named a team of seasoned Iowa campaign hands, Warren took the stage in the bowling alley bar to a typical campaign soundtrack of pop and classic hits.

A team of private security guards guided attendees and the dozens of media through the parking lot. Warren’s staff logged the names and contact information for those interested in more information.

“I’m here to ask every one of you to be a part of this,” Warren said. “Join us in this because this is about what we can do together.”

Iowa’s caucuses, local political meetings held statewide and run by the party, are scheduled to begin the 2020 nominating campaign in February 2020.

Warren’s visit is an effort to gain an early advantage in the state. Other Democratic presidential prospects are expected to announce their plans in the coming weeks, and have been in touch for weeks with party leaders, activists and potential staff in Iowa.