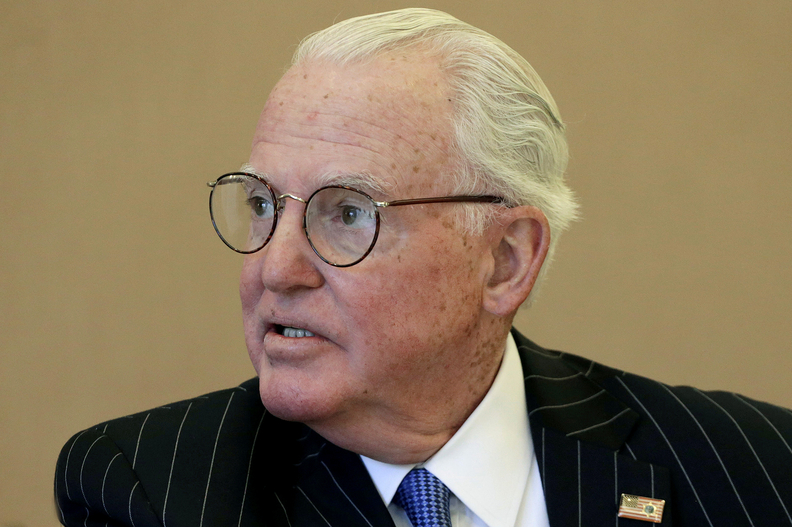 Federal prosecutors revealed in a court hearing Thursday that recently-arrested Chicago Alderman Edward Burke, a powerful city councilman known for his opposition to gun rights, possessed 23 guns in his City Hall offices, the Chicago Tribune reports. The guns were discovered by the Federal Bureau of Investigation during a November raid.

Burke, as an alderman, was legally designated a “peace officer,” which allowed him to possess the guns. Still, the discovery was ironic, as Burke is known as one of Chicago’s leading anti-gun rights advocates. The alderman, who represents the city’s 14th Ward, spearheaded laws that banned cellphone cases that looked like guns and barred concealed weapons in establishments that served alcohol.

Burke is no ordinary alderman. The longest-serving alderman in Chicago history, Burke was named by the Chicago Sun-Times as the most powerful man in Chicago. He chairs the powerful Finance Committee, though Mayor Rahm Emanuel stated last week that Burke would have to relinquish his chairmanship.

According to the federal criminal complaint, Burke is being charged with extortion. The complaint alleges that Burke blocked a Chicago restaurant from receiving remodeling permits as a way of taking revenge against the restaurants owners, who allegedly refused to hire Burke’s law firm.

The complaint does not specify the name of the restaurant, but sources told the Chicago Tribune that the restaurant is the same Burger King in front of which a Chicago policeman killed Laquan McDonald in October 2014. The McDonald case made national headlines and spurred a conversation about police killings of unarmed African-Americans.

Burke’s trial will go on in federal court. Appropriately, the landmark courthouse has, since 1976, been home to more public corruption cases than any other federal courthouse in the United States.

The trial of Edward Burke parallels the corruption trial of former California State Senator Leland Yee (D-San Francisco), a gun control advocate who was convicted of weapons trafficking. Just as conservatives can wonder if Yee’s true motivation for pushing gun control was to eliminate the competition, conservatives can speculate what a power-hungry, corrupt Chicago politician intended to do with his stash of firearms.