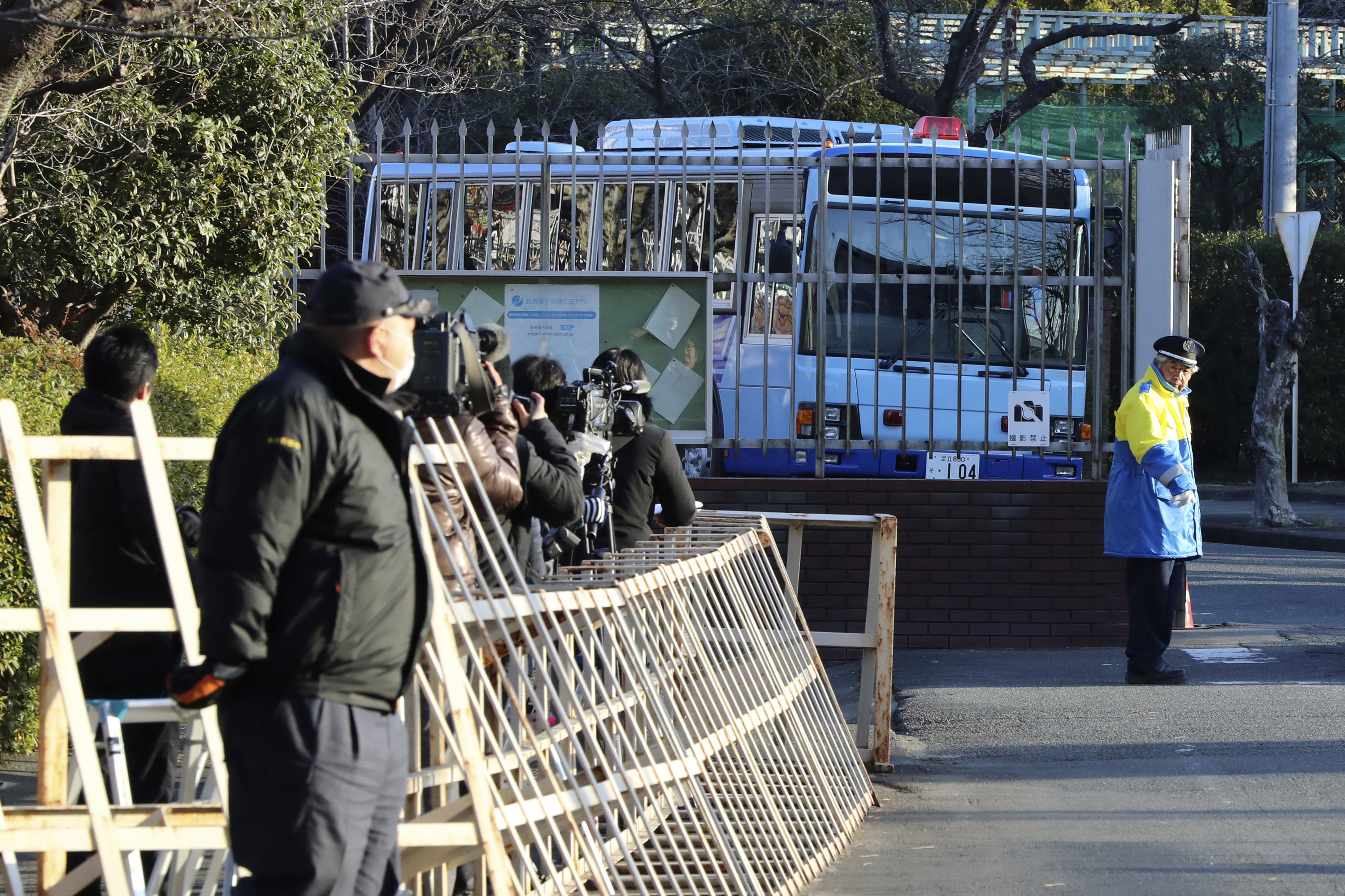 TOKYO — The former chairman of Japan’s Nissan, Carlos Ghosn, appeared in court on Tuesday and asserted his innocence while demanding the reason for his prolonged detention.

The hearing was Ghosn’s first public appearance since his Nov. 19 arrest.

Ghosn, appearing in a dark suit without a tie and wearing plastic slippers and looking thinner than he had before his arrest, denied any wrongdoing.

“Your honor, I am innocent of the accusations against me,” he said. “I am wrongfully accused,” he said, reading from a prepared statement.

Prosecutors have charged Ghosn with falsifying financial reports in underreporting his income. Widely respected for having saved the Japanese automaker from near bankruptcy, Ghosn said the company’s and his own finances were harmed by the global financial crisis a decade ago.

He said he had an option to retire and use his retirement fund to restore his personal finances, harmed by volatile forex moves at the time.

But he decided to stay and restore Nissan, he said.

Presiding judge Yuichi Tada read out the charges and said Ghosn was being detained because he was considered a flight risk and there was the risk he may hide evidence.

He was handcuffed with a rope around his waist. Two guards who led him in uncuffed him and sat with him on a bench.

According to a statement released before the hearing to some media, including The Associated Press, by people familiar with the case, Ghosn said he had “acted honorably, legally and with the knowledge and approval of the appropriate executives inside the company with the sole purpose of supporting and strengthening Nissan.”

In the statement, Ghosn said the investment losses he was being accused of stemmed from his having to be paid in yen and he had asked Nissan to temporarily take on the collateral for foreign exchange contracts, and the company suffered no losses.

The people who released the statement requested anonymity because of the matters’ confidentiality.

He also said payments questioned by prosecutors and by Nissan that were made to Khaled Juffali, a Saudi businessman, were for real work he did to sort out problems with a local distributor.

Khaled Juffali Company issued a statement “to help set the record straight,” saying the $14.7 million in payments over four years from Nissan “were for legitimate business purposes in order to support and promote Nissan’s business strategy in the Kingdom of Saudi Arabia, and included reimbursement for business expenses.”

Ghosn has been charged with falsifying financial reports in under-reporting his pay by about 5 billion yen ($44 million) over five years through 2015.

According to his prepared statement, he denied that charge.

“Contrary to the accusations made by the prosecutors, I never received any compensation from Nissan that was not disclosed,” his statement said.

In Japan, suspects are routinely held without bail, often due to fears about tampered evidence. Prosecutors have said that Ghosn, a Brazilian-born Frenchman of Lebanese ancestry, is a flight risk.

Ghosn was sent in by Renault SA of France in 1999 and led a spectacular turnaround at Nissan Motor Co. for two decades, during which he mostly served as chief executive.

Renault owns 43 percent of Nissan, while Nissan owns 15 percent of Renault. The alliance, which in recent years has added smaller Japanese automaker Mitsubishi Motors Corp., has risen to be one of the most successful in the industry, rivaling Volkswagen AG of Germany and Japan’s Toyota Motor Corp.

Ghosn remains the head of Renault.

Ghosn’s courtroom appearance drew worldwide attention, with throngs of cameras set up outside the Tokyo Detention Center on Tuesday to capture his departure. The Tokyo District Court said 1,122 people lined up to draw lots for the 14 courtroom seats allotted to the public. No cameras or audio recordings are allowed to document Japanese court sessions.

Ghosn’s downfall was sudden, coming in a surprise arrest as his private jet landed in Tokyo on Nov. 19.

Greg Kelly, another Nissan executive and board member, was also arrested and charged with collaborating with Ghosn on the underreported income. Kelly, who was released on bail on Dec. 25, also has said he is innocent.

Tokyo prosecutors have repeatedly prolonged Ghosn’s detention, adding on new allegations, with the latest being suspicion of breach of trust stemming from allegations that he had Nissan temporarily shoulder his personal investment losses.

Formal charges on those allegations have not been filed. No trial dates have been set for Ghosn or Kelly.