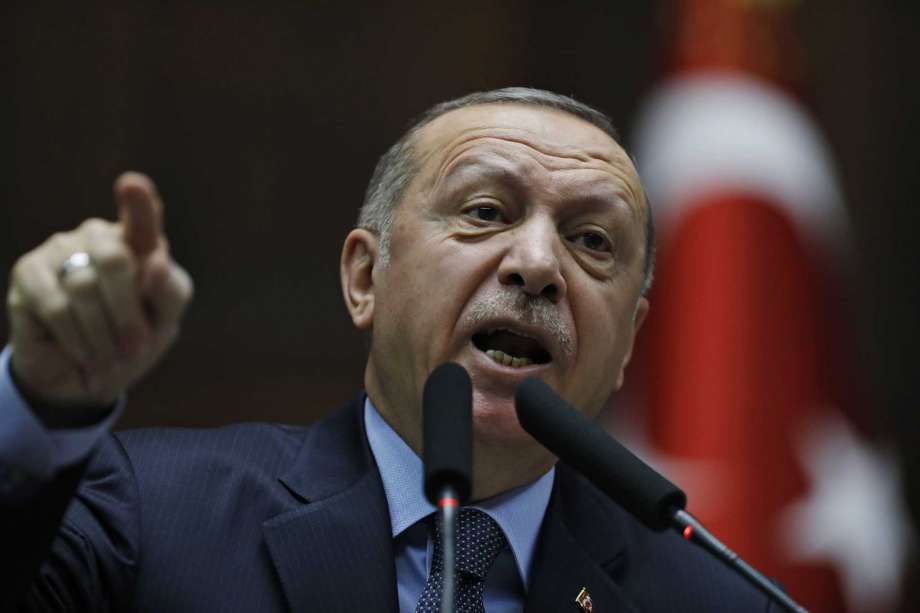 A top Syrian Kurdish official says his fighters are prepared to confront Turkish forces if they enter northeastern Syria.

Shahoz Hasan, co-chair of the largest Kurdish group in Syria the Democratic Union Party, or PYD, says it’s clear from Ankara’s latest statements that Turkey has a plan to enter northeastern Syria.

Hasan spoke on Tuesday to The Associated Press as White House national security adviser John Bolton was in Turkey to negotiate the fate of America’s Kurdish allies amid a planned U.S. troop withdrawal from Syria.

Shortly after Bolton’s meetings and in an apparent snub to the U.S. diplomatic push, Turkish President Recep Tayyip Erdogan said Ankara’s preparations for a new military offensive against terror groups in Syria are “to a large extent” complete.

Turkish President Recep Tayyip Erdogan suggests that officials within the U.S. administration may be trying to obstruct a “clear agreement” that he and President Donald Trump reached during a Dec. 14 telephone conversation.

Erdogan said that during the call — which he described as a “historic turning point” — Turkey pledged to take on the fight against remaining Islamic State militants when the U.S. troops withdraw from Syria.

He made no mention of Syrian Kurdish militiamen — U.S. allies in the fight against IS — whom Ankara considers terrorists. Erdogan was addressing legislators from his ruling party on Tuesday in Parliament.

Erdogan said that “despite the fact that we reached a clear agreement with Mr. Trump, different voices have been raised from different echelons of the U.S. administration.”

But he added that “Mr. Trump’s views on Syria and his determination to pull out remain our point of reference.”

When reporters asked Erdogan why he did not meet Trump’s aide John Bolton who was in Ankara on Tuesday, Erdogan said Bolton met with his Turkish counterpart. He said however, that he could soon hold a telephone conversation with Trump.

U.S. National Security Adviser John Bolton is set to depart Turkey without meeting with President Recep Tayyip Erdogan, in an apparent snub over disagreements about Kurdish fighters in Syria.

A U.S. official had said over the weekend that the two were expected to have consultations on Tuesday about the fate of Kurds allied with the United States in Syria as part of discussions about President Donald Trump’s troop draw-down from the country.

Erdogan says that Ankara “cannot make any concessions. Those involved in a terror corridor (in Syria) will receive the necessary punishment.”

In his speech, Erdogan also slammed Bolton over comments suggesting the United States would prevent attacks on Kurds.

Turkish insists its military actions are aimed at Kurdish fighters in Syria whom it regards as terrorists and not against the Kurdish people.

Bolton has said he is seeking assurances that Turkey won’t attack the Kurdish militia in Syria that’s allied with the United States in the fight against the Islamic State. He says it’s a “condition” for President Donald Trump’s planned withdrawal of American forces in northeastern Syria.

The success of that effort was not immediately clear. Turkey considers the Syrian Kurdish Peoples Protection Units, or YPG, a terrorist group.

Bolton had been expected to meet with Erdogan though it remains uncertain if they will meet Tuesday.

President Donald Trump’s shifting timetable for pulling U.S. troops out of Syria has left allies and other players in the region confused and jockeying for influence over a withdrawal strategy that appeared to be a work in progress.

One day after White House national security adviser John Bolton announced the U.S. pullout would not be as immediate as Trump had initially declared, U.S. allies on Monday sought clarification from American diplomats. The Kurds, who have fought alongside U.S. forces against the Islamic State group and fear an assault by Turkey if the United States withdraws, were still asking publicly for an explanation from Washington.

Bolton said the U.S. would first seek assurances from Turkey that it would not harm the Kurds — for the first time adding a “condition” to the withdrawal.

He arrived Monday in Turkey to seek those guarantees from Turkish President Recep Tayyip Erdogan, but there was little reason for optimism.