Los Angeles teachers are ready for first strike in 30 years 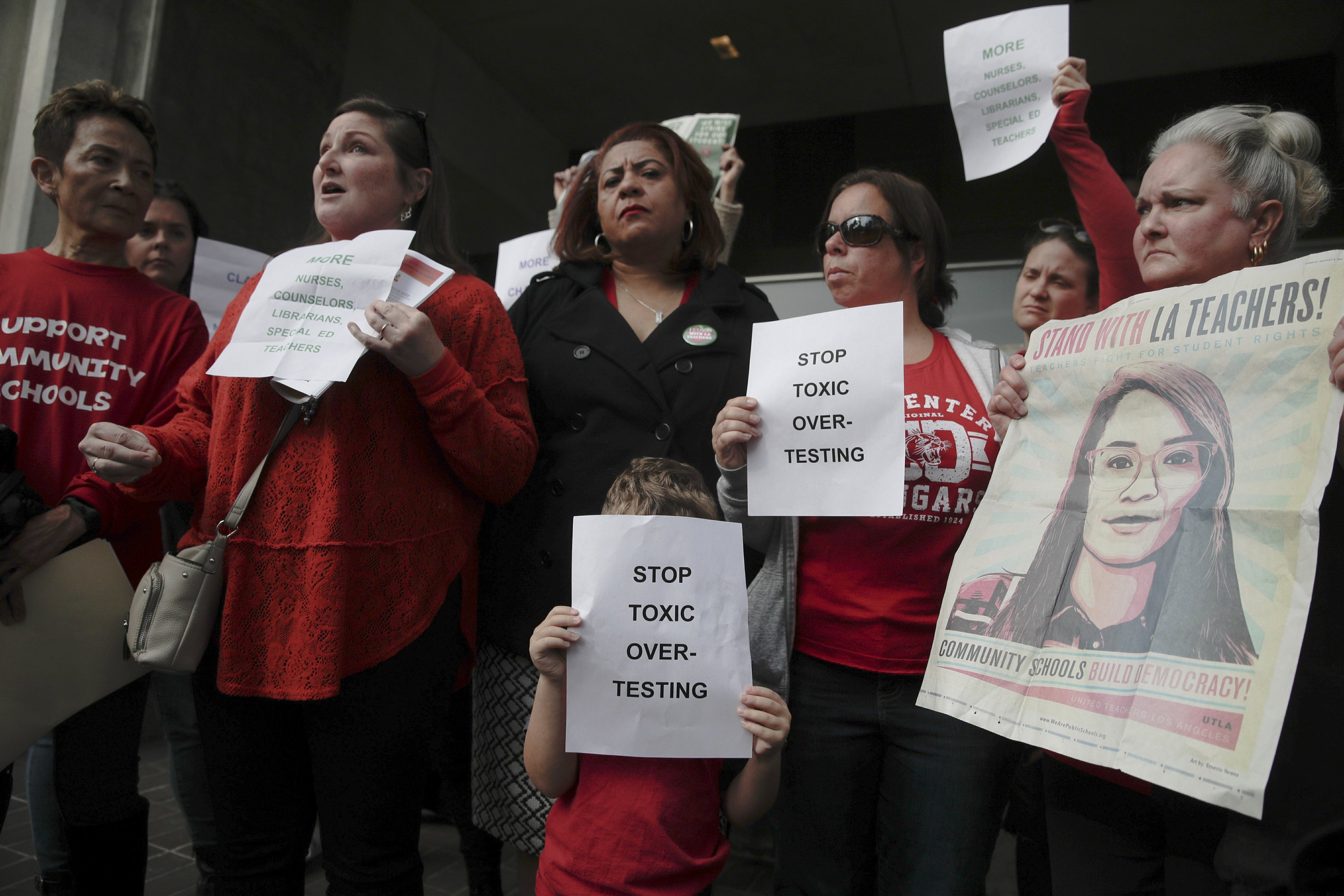 LOS ANGELES — Teachers in Los Angeles, whose 640,000 students make it the nation’s second-largest school district, are ready to strike Thursday over a contract dispute that follows teacher walkouts in other states that emboldened organized labor after a critical defeat at the U.S. Supreme Court.

United Teachers Los Angeles said its 35,000 members would walk off the job for the first time in 30 years if a deal wasn’t reached on higher pay and smaller class sizes. The Los Angeles Unified School District says the union’s demands could bankrupt the school system, which is projecting a half-billion-dollar deficit this budget year and has billions obligated for pension payments and health coverage for retired teachers.

Thousands of teachers took to the streets of downtown Los Angeles last month to demand a new contract. They wore red shirts, banged drums and carried signs that read “Stand With LA Teachers!” as they marched.

They are hoping to build on the “Red4Ed” movement that began last year in West Virginia, where a strike resulted in a raise. It moved to Oklahoma, Kentucky, Arizona, Colorado and Washington state, spreading from conservative states with “right to work” laws that limit the ability to strike to the more liberal West Coast with strong unions.

“What you’re seeing with unions is real enthusiasm and a belief that you can actually be successful,” said Robert Bruno, a professor of labor and employment relations at the University of Illinois. “The educational sector is rife with deep grievance and frustration, but there’s now a sense that you can actually win.”

“Each state is different, but the commonality across all states is teachers, and parents are sick of schools not being invested in,” he said.

But unlike other states, schools will stay open if a strike happens. The district has hired hundreds of substitutes to replace teachers and others who leave for picket lines. The union said it’s “irresponsible” to hire substitutes and called on parents to consider keeping students home or join the marchers if a strike goes forward.

It comes as unions are stinging from a Supreme Court ruling last year that said government workers can’t be required to join unions and pay dues.

Larry Sand, a retired Los Angeles and New York City teacher who heads the California Teachers Empowerment Network, said he believes the Los Angeles union sees its showdown with the district as a public “sales pitch” for organized labor now that teachers have a choice about joining.

Sand, whose organization describes itself as a nonpartisan information source for teachers and the public, said overly generous benefits for teachers in the past have overburdened the district.

Teachers earn between $44,000 and $86,000 a year depending on their education and experience, according to the Los Angeles County Office of Education. The district says the average teacher salary is $75,000, which reflects the older, more experienced workforce.

The district has offered a 6 percent raise over the first two years of a three-year contract. The union wants a 6.5 percent hike at the start of a two-year contract. Health care fully paid by the district and a pension plan would be unchanged under both proposals.

The union also wants significantly smaller class sizes, which routinely top 30 students, and more nurses, librarians and counselors to “fully staff” the district’s campuses in Los Angeles and all or parts of 31 smaller cities, plus several unincorporated areas.

The union argues that the district is hoarding reserves of $1.8 billion that could be used to fund the pay and staffing hikes. The district said that money is needed to cover retiree benefits and other expenses.

The union says Beutner and school board members who voted him in are trying to privatize the district, encouraging school closures and flipping public schools into charters. Charter schools are privately operated public schools that compete for students and the funds they bring in.

Beutner, who attended public school, has said his plan to reorganize the district would improve services to students and families. He and his supporters on the board envision an education system with a “portfolio approach” — public and charter schools under the same leadership.

Sand of the California Teachers Empowerment Network said Beutner is “the right man for the job” because his business background gives him an understanding that “there’s a bottom line that has to be acknowledged.”

Both sides say they don’t want a strike, but John Rogers, a professor of education at the University of California, Los Angeles, said one seems inevitable.

“I would be surprised if a strike doesn’t come about, because I think each side has a real interest in demonstrating the dominance of their positions,” Rogers said.