No easy way out? Trump boxed in by politics amid shutdown 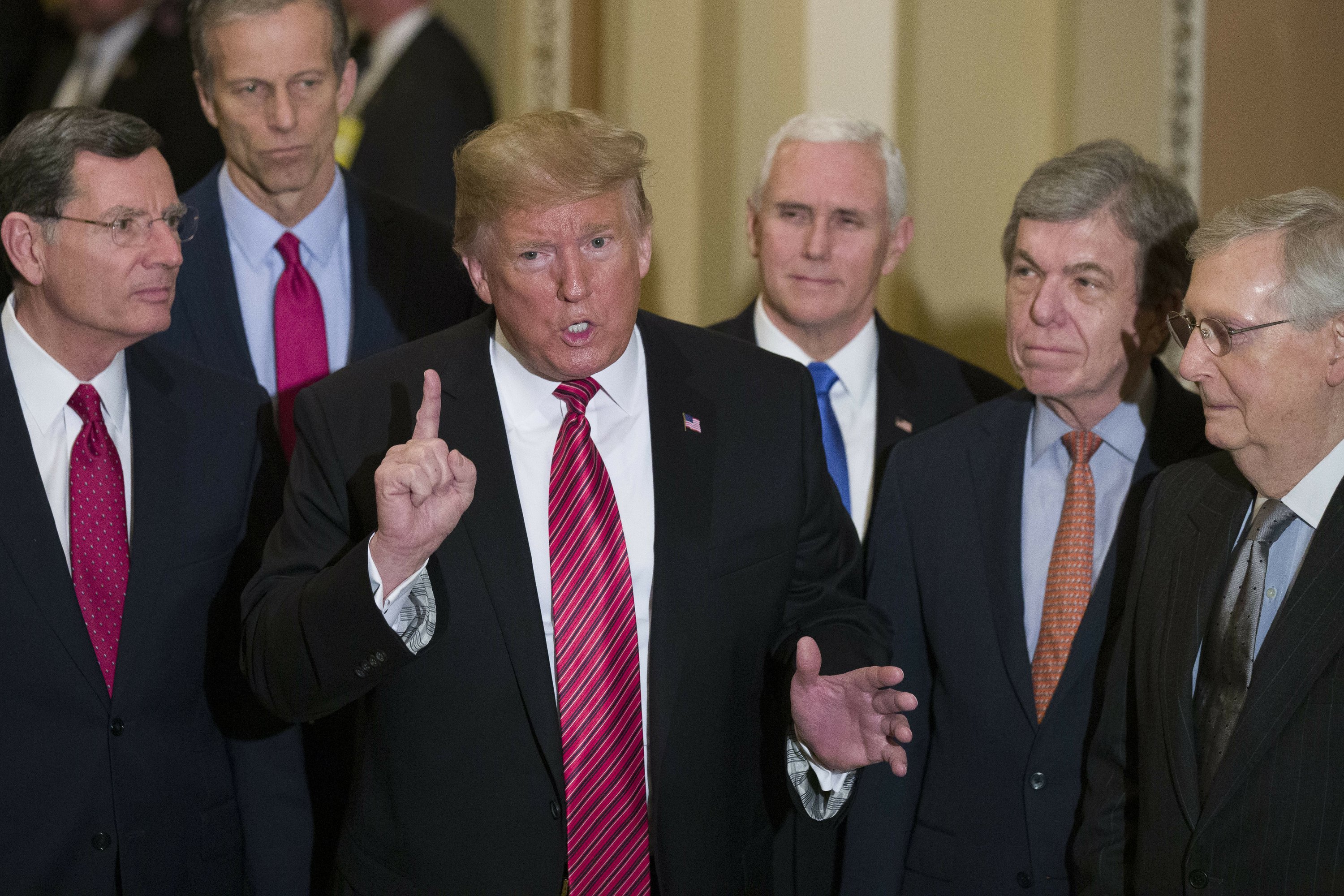 NEW YORK — There is no easy way out.

As the third government shutdown of President Donald Trump’s tenure stretched into its 19th day, political pressures on Trump and the Democrats have left little room for compromise in the standoff over funding for a border wall. Most prominently, Trump’s narrow focus on the desires of his most ardent supporters has him convinced he cannot back off his signature campaign promise without facing backlash.

Some powerful Republican allies in Washington and beyond are cheering on his demands for $5.7 billion funding for the wall, even if some remain uneasy. For Democrats, broad public skepticism about Trump’s case for the wall — combined with a driving push from the base to stand up to the president — has assured them they’re on solid ground in refusing to bend.

The dynamic has set the stage for what could be extended political gridlock with the economic livelihoods of some 800,000 federal workers in the balance. The looming question is whether the impact of the shutdown on government services and the plight of struggling federal workers force Republican lawmakers to break from the president or compel Democrats to budge. Until then, the dispute has given both parties a fast first test in the politics of divided government as they try to trade blame, manage their messages and strike a balance between competing political wings.

Trump’s focus now is squarely on his conservative base and its support for the wall that came to symbolize Trump’s promise for a hard-line, unrelenting approach to immigration.

“He got elected because of that wall,” said Trump confidant Jerry Falwell Jr., president of the evangelical Liberty University. Falwell said he has told Trump he’s doing the right thing. “I don’t think it’ll help him at all if he backs down.”

White House aides largely agree. Officials maintain the issue is a political winner, though they have urged the president to be more aggressive in making his case to the public — and to any wavering Republican lawmakers. Trump outlined his argument in graphic terms during a prime-time Oval Office address Tuesday night. While several studies suggest that illegal immigration has no impact on crime rates, the president highlighted horrific crimes committed by immigrants and suggested his wall was needed to prevent this “crisis.”

“How much more American blood must we shed before Congress does its job?” asked Trump, who plans to visit the border Thursday.

The White House has been searching for options — but not one that involves compromise. The administration has explored the possibility of funding the massive wall without congressional approval by declaring a national emergency or using funds from another department, though such moves would almost certainly trigger a legal challenge and may push some Republicans in Congress to break.

The vocal Republican critics are few and far between.

Vice President Mike Pence got a standing ovation during a closed-door meeting of congressional Republicans on Tuesday after he told them to “stand strong” and cited a C.S. Lewis quote on courage as a virtue. As many as two dozen Republicans — a tiny fraction of the 199 Republicans serving in the House — are expected to join House Democrats this week in passing a bill to start reopening parts of the government.

There were modest signs of discomfort with Trump’s strategy among Senate Republicans, though few had a pressing political incentive to break with the president given that all but a handful expect easy re-elections in 2020.

Sen. John Cornyn, R-Texas, called the shutdown “completely unnecessary and contrived. People expect their government to work … this obviously is not working.”

At the same time, newly-elected Sen. Kevin Cramer, R-N.D., was more representative of the mood in his caucus when he said Trump is doing the right thing: “They love him. And they want the wall.”

The GOP support stands in sharp contrast to most Americans, who do not approve of Trump’s job performance. His approval rating has hovered close to 40 percent or below for much of his presidency. But Trump’s approval within the Republican Party has surged close to 90 percent.

The sharp divide is reflected in public opinion of the wall.

Overall, 54 percent of Americans oppose construction of a wall along the Mexican border, according to a Quinnipiac poll released in December. At the same time, 86 percent of Republicans backed the proposal.

Those numbers have helped keep Democrats united in opposition.

Both party leaders on the Hill and the handful of presidential hopefuls starting to compete for the Democratic nomination have called on Democrats to hold strong.

“It’s not a question as to whether the Democrats are out of line,” said Steyer, who was expected to announce plans about a presidential bid on Wednesday. “What (Trump) is doing is trying to extort the Democratic Congress with the pain of the American people. … It’s like somebody who kidnapped a kid and is holding them hostage to his campaign promise, which made no sense then, makes no sense now, and is incredibly wasteful.”

The competing force on Democrat leaders is the pressure to prove they can restore some stability to Trump’s Washington. Despite the liberal base’s calls to stand up to Trump, party leaders believe they won big in last year’s midterms by talking about pocketbook issues and promising to govern. They are eager to make good on that pledge.

Republican pollster Frank Luntz suggested there would be little political price to pay for those associated with the extended government shutdown, which is just days away from becoming the longest in U.S. history — even if most Americans blame Trump and his party.

“For most people, their day-to-day lives are not being affected,” Luntz said.

A frequent Trump critic, he predicted the Republican president would find a way to escape the shutdown as a political winner, even if it appeared unlikely now.

“Is he boxed in? I’d say no. He’s the Harry Houdini of American politics,” Luntz said. “He had 38 percent favorability on the day of the election and he still won.”