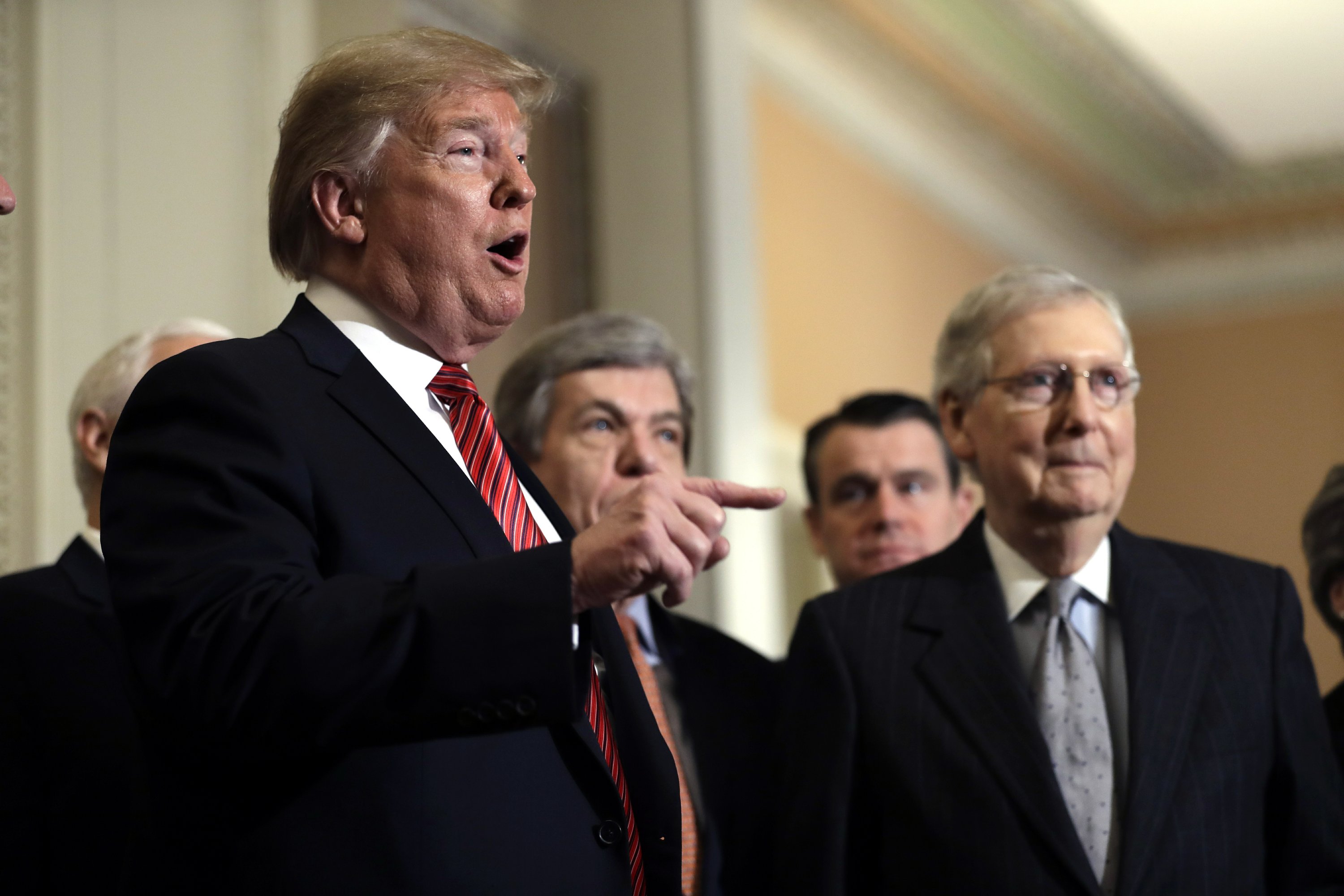 WASHINGTON — The Latest on President Donald Trump and the partial government shutdown (all times local):

Congressional leaders from both parties have returned to the White House for another round of negotiations with President Donald Trump on the ongoing partial government shutdown.

The two sides have made no apparent progress in the past week, with Trump sticking to his demand of $5.7 billion for a border barrier and Democrats insisting they won’t give him the money.

Trump has been making a public case that there is a “crisis” at the southern border. And he’s still threatening to declare a national emergency to circumvent Congress if he can’t get the wall money from them.

He told reporters during a visit to the Capitol earlier Wednesday that he may turn to a declaration “at some point” if top Democrats Chuck Schumer and Nancy Pelosi “don’t agree” with his assessment about the problems at the border.

President Donald Trump says Republicans are “totally unified” in the shutdown standoff over his long-promised southern border wall, though some GOP lawmakers have been expressing concern about the 19-day partial government closure.

Trump traveled to Capitol Hill on Wednesday to meet with Senate Republicans. He says there was “no discussion about anything other than solidarity.”

Trump has been considering a national emergency declaration to bypass Congress to build the wall. He says he “may do that at some point” if he can’t get a deal with Democrats.

Trump also plans to meet with top congressional Democrats and Republicans at the White House on Wednesday.

President Donald Trump arrived on Capitol Hill claiming he has “tremendous” support as he headed into a meeting with Republican senators uneasy with the government shutdown over his border wall.

Asked how long the shutdown would last, Trump told reporters Wednesday “whatever it takes.”

The partial shutdown is now in its 19th day, the second longest ever.

Trump and Vice President Mike Pence arrived for the private lunch meeting with the Senate GOP caucus to shore up support.

Several Republican senators have said the government should be re-opened while talks continue over border security and Trump’s demand for money to build the wall along the U.S.-Mexico border.

President Donald Trump says he thinks he and the Democrats are “getting closer” to a deal to end the budget stalemate that has partially shut down the government despite no evidence that any progress has been made.

And he’s suggesting the partial government shutdown could be “a blessing in disguise” because, he suggests, it could lead to a broader immigration deal.

Trump spoke Wednesday during an Oval Office bill signing on anti-human trafficking legislation. It’s a day after he delivered a prime-time address trying to make the case for his long-stalled U.S.-Mexico border wall.

Trump says that he would like to see “real immigration reform in this country because we need it.” He says, “Everybody wants to see immigration reform,” adding that perhaps the stalemate “will turn out to be a blessing in disguise.”

Democrats have blamed Trump for the shutdown.

Gone are the days when the U.S. and Mexican governments regularly exchanged statements over President Donald Trump’s insistence on a border wall.

Mexican President Andres Manuel Lopez Obrador said Wednesday he won’t be drawn into what he calls a U.S. internal dispute, an apparent reference to the 19-day-old partial U.S. government shutdown over a border barrier.

Lopez Obrador says, “We are not going to respond to situations arising from internal affairs in the United States.”

Unlike his predecessor, the Mexican leader didn’t have to respond to any specific aspersion about Mexico, because Trump didn’t make any in his Tuesday night address to the American public. Relations between the two leaders have been surprisingly cordial, given their ideological differences.

Lopez Obrador said, “Of course, there are those … who want us to get into a confrontation. We always want a friendly relationship with the United States, a cooperative relationship.”

As a presidential candidate Trump promised Mexico would pay for a border wall, but Mexico refused.

President Donald Trump is using a bill signing focused on curbing human trafficking to push his case for a wall on the U.S.-Mexico border.

Wednesday’s bill signing came a day after Trump’s prime-time speech designed to persuade Americans that illegal immigration and trafficking at the border are a crisis.

The White House says it’s the fourth bipartisan bill the Republican president has signed in the last few weeks to prevent human trafficking.

Congressional Democrats say they’ll head to the White House with the plan to reopen the government — the same one they’ve been presenting. They’re asking President Donald Trump to accept a bipartisan bill to fund border security without the wall.

Speaker Nancy Pelosi said Wednesday the president “could end the Trump shutdown and re-open the government today, and he should.”

Pelosi and Senate Democratic leader Chuck Schumer spoke at an event where they were flanked by federal workers going without pay during the shutdown, now in its 19th day.

Schumer called workers the “collateral damage” of Trump’s “temper tantrum.” He said the president failed to “persuade a soul” during his “divisive” prime-time address Tuesday night to the nation.

Trump meets with congressional leaders at the White House Wednesday afternoon. He rejected the Senate’s bipartisan funding bill in December, sparking the shutdown.

The White House is trying to keep jittery congressional Republicans from defecting over the toll the partial government shutdown is taking in their states.

President Donald Trump and Democrats have been at an impasse over funding for his proposed border wall, which has led to a partial government shutdown, now in its 19th day.

Trump meets with Senate Republicans Wednesday on Capitol Hill just hours after he argued on national television that a border wall was needed to resolve a security and humanitarian “crisis.”

Senators say the shutdown has led to disruptions in agricultural payments for farmers, as well as for home buyers trying to secure government-backed home loans. Lawmakers also are worried about missed paychecks for government workers Friday.

As many as half a dozen GOP senators have said the government should reopen while border security negotiations with Democrats continue.

In his first national address from the Oval Office, the president gave no indication he was softening his stance that the partial government shutdown would continue without money for the wall.

Trump argued Tuesday night that the wall was needed to resolve what he called a security and humanitarian “crisis.”

He addressed the nation as the shutdown stretched through its third week, with hundreds of thousands of federal workers going without pay and some congressional Republicans growing increasingly jittery about the impasse.

Trump plans to visit Senate Republicans at the Capitol on Wednesday before meeting with Democratic leaders at the White House.