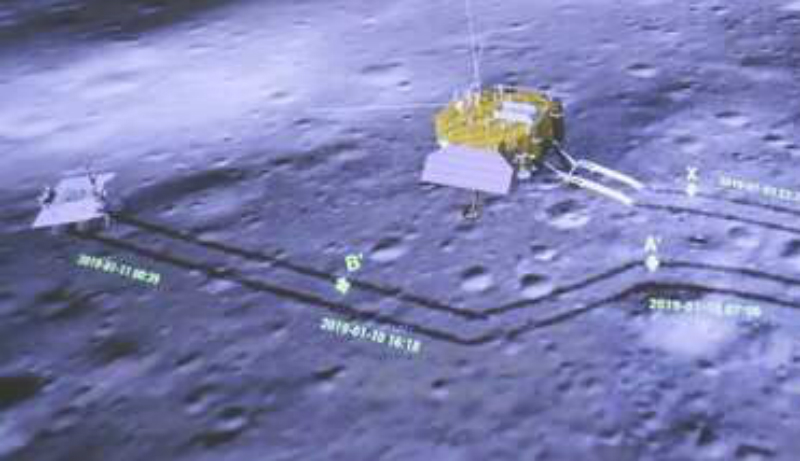 BEIJING — China on Friday broadcast pictures taken by its rover and lander on the moon’s far side, in what its space program hailed as another triumph for the groundbreaking mission to the less-understood sector of the lunar surface.

The pictures on state broadcaster CCTV showed the Jade Rabbit 2 rover and the Chang’e 4 spacecraft that transported it on the first-ever soft landing on the far side of the moon, which always faces away from Earth.

The pictures were transmitted by a relay satellite to a control center in Beijing, although it wasn’t immediately clear when they were taken. Officials with the China National Space Administration said they mark a “total success” for the mission in showing the rover moving away from its lander.

The pictures show a rocky surface with the jagged edge of craters in the background, posing a challenge for controllers in plotting the rover’s future travels, the official Xinhua News Agency said.

Among the images is a 360-degree panorama stitched together from 80 photos taken by a camera on the lander after it released the rover onto the lunar surface, Xinhua said, citing Li Chunlai, deputy director of the National Astronomical Observatories of China and commander-in-chief of the ground application system of Chang’e 4.

“From the panorama, we can see the probe is surrounded by lots of small craters, which was really thrilling,” Li was quoted as saying.

The space administration also released a 12-minute video of Chang’e 4′s landing utilizing more than 4,700 images taken by an on-board camera. The probe is shown adjusting its altitude, speed and pitch as it seeks to avoid obstacles on the ground.

Researchers hope that low-frequency observations of the cosmos from the far side of the moon, where radio signals from Earth are blocked, will help scientists learn more about the early days of the solar system and birth of the universe’s first stars.

The far side has been observed many times from lunar orbits, but never explored on the surface. It is popularly called the “dark side” because it can’t be seen from Earth and is relatively unknown, not because it lacks sunlight.

The pioneering landing highlights China’s ambitions to rival the U.S., Russia and Europe in space through manned flights and the planned construction of a permanent space station.