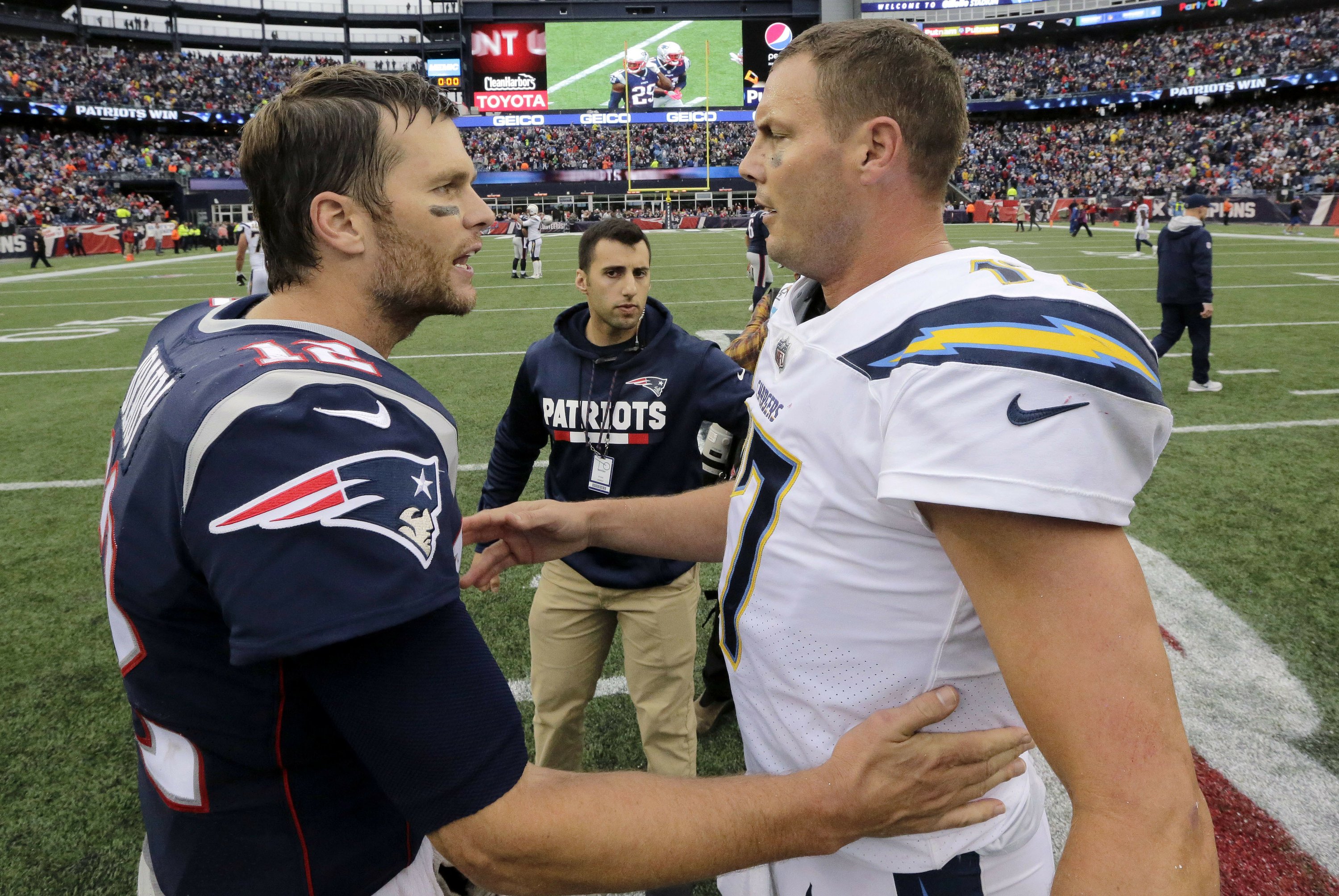 FOXBOROUGH, Mass. — Tom Brady typically shrugs off any mention of records or milestones he sets.

But even he had to chuckle at the one he and Chargers quarterback Philip Rivers will mark when they meet in Sunday’s divisional playoffs.

Brady, who will be 41 years and 163 days old, and Rivers, at 37 years and 36 days old, will combine to be the oldest pair of quarterbacks to face each other in an NFL playoff game, breaking the mark Brady held with Peyton Manning.

“Nice,” Brady said of the impending footnote. “Nice and old.”

Sunday will be just the fourth playoff meeting between the teams, with the Patriots holding a 2-1 edge.

Rivers enters Sunday with a 1-7 record against the Patriots, including 0-4 in games in Foxborough and 0-2 in the playoffs. Rivers earned his lone victory against New England during the 2008 regular season, when the Chargers were still in San Diego. Brady was sidelined for that game by a knee injury and Matt Cassel started in his place.

Brady is 7-0 as a starter against Rivers .

The Patriots (11-5), who captured their 10th straight AFC East title this season, will be seeking their eighth consecutive trip to the AFC title game.

The Chargers (13-4) haven’t even been to the conference title game since losing 21-12 to the Patriots during the 2007 season.

Rivers played in that game just days removed from tearing the ACL in his right knee. He limped his way through it while being intercepted twice and failing to throw a touchdown pass.

It’s become the toughness brand for a quarterback that hasn’t missed a game since becoming the Chargers starter in 2006.

Rivers, who led his team to five wins in its last six regular-season games and a road win at Baltimore in the wild-card round last week , said he’s tried to keep past shortcomings against New England out of his mind this week.

“It’s not something you think about a whole lot,” he said. “It exists and it’s there but again, and I mean this, I don’t feel that I’m playing Tom. Certainly, it’s a Tom Brady-led team and we know how things work with the quarterback and the head coach that have the record attached to it. We’ve got a heck of a challenge.”

It will also be a chance to earn a signature win for second-year Chargers coach Anthony Lynn, who has steered Los Angeles through its relocation and a season that included a game in London.

To have another chance at this stage of his career to notch a playoff win against a New England team that has been the standard in the conference is an opportunity not lost on Rivers.

“Fired up to have a shot,” Rivers said.

Here are some things to watch for in Sunday’s game:

One thing that gives the Chargers confidence heading into Foxborough is their record away from Los Angeles this season.

The Chargers are facing a Patriots team that is 8-0 in Gillette Stadium this season. But Los Angeles is 8-1 on the road , with its lone blemish coming against the crosstown Los Angeles Rams.

“We have a tough football team, no doubt. I believe that. I think going on the road, it really doesn’t faze this team,” Lynn said.

In addition to earning his first postseason win over New England, Rivers will also be trying to help the Chargers end their recent struggles in the divisional round.

Chargers running back Melvin Gordon is expected to be active Sunday, despite missing the first practice of the week to rest the knee injury he sustained in their wild-card win over the Ravens. He was limited for Thursday’s workout, but removed from the injury report on Friday.

Los Angeles’ offense is at its best when Gordon can take the pressure off Rivers. He had an 87-yard touchdown in last year’s regular-season meeting with the Patriots. He also has 12 touchdowns in the Chargers’ past nine games on the road, including playoffs.

The forecast for Sunday in Foxborough is 29 degrees, which recently has been a good thing for the Patriots.

The Chargers contemplated staying on the East Coast after last week’s game in Baltimore, but ultimately decided to return to California to practice.

Patriots coach Bill Belichick isn’t counting on the weather being that much of an advantage, though.

“They’re a good football team. We’re playing the Chargers. We’re not playing the weather,” he said. “Whatever it is, it is.”