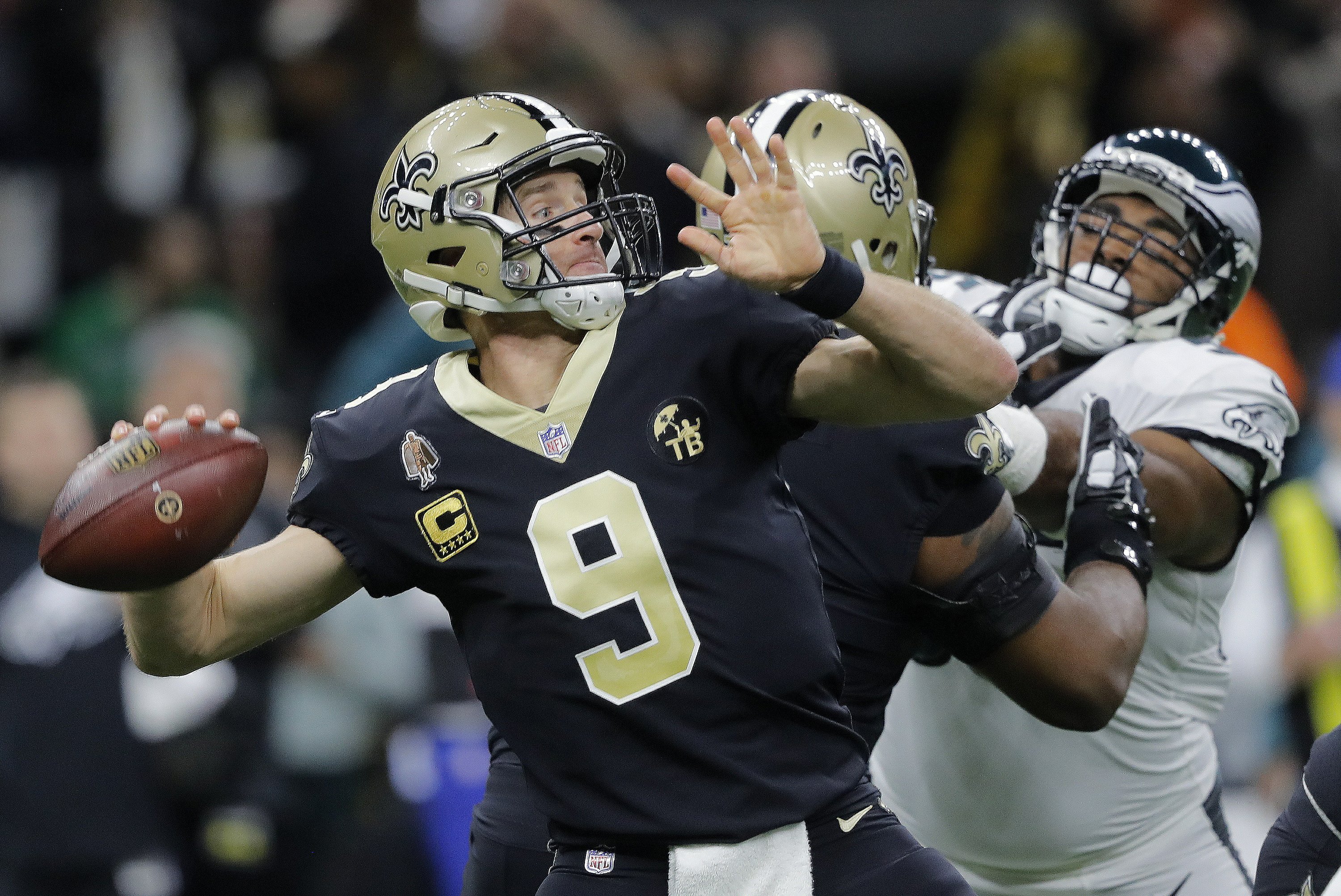 NEW ORLEANS — When the New Orleans Saints finally found their rhythm, they marched one step closer to the Super Bowl.

Using a dominant ball-control offense and a few gambles that paid off, the Saints got two touchdown passes from Drew Brees and two interceptions from Marcus Lattimore in a 20-14 victory over the Philadelphia Eagles.

Brees took the Saints on scoring drives of 92, 79 and 67 yards after falling behind 14-0. Lattimore clinched it when Nick Foles’ pass from the Saints 27 deflected off usually sure-handed receiver Alshon Jeffery with about two minutes remaining. A couple dozen Saints players surged off the sideline toward the end zone in celebration, while Jeffery fell face-first to the turf in agony.

New Orleans (14-3) will host the NFC title game next week against the Rams (13-4). Los Angeles, which fell 45-35 at the Superdome in November, will try again next week, with the winner going to the Super Bowl. The Saints’ win finished off a sweep of the divisional round by teams coming off byes.

Wil Lutz added two field goals for the Saints, who last got this far in 2009, when they won the Super Bowl.

Philadelphia (10-8) will not repeat as NFL champion; no team has done so since the 2004 Patriots.

This was really two games in one. Philly scored on its first two drives as the Saints could do virtually nothing right.

“Listen, they got off to a fast start, they’re a great team,” Brees said. “Nick Foles has done a phenomenal job for them. We knew it was going to be different than last time.”

After that opening period, it was all New Orleans, yet the resilient Eagles kept it close enough that when Lutz missed a 52-yard field goal with 2:58 remaining, they were only one-score behind.

Foles, the hero of last year’s Super Bowl run, got them in position for yet another late winning score — just like last week at Chicago and last February against New England for the championship.

Then, Jeffery couldn’t handle a second-down pass, and it was over.

Brees had 2-yard touchdown passes to rookie Keith Kirkwood and All-Pro wideout Michael Thomas, who had 12 receptions for 171 yards.

Philadelphia had ball for more than nine minutes in the first quarter, after which the Eagles had the ball about 13 minutes and never scored.

New Orleans, which routed Philadelphia 48-7 in November, gambled on its first play — and lost. Brees was a bit short on a deep pass to Ted Ginn Jr., and it was picked off by Cre’Von LeBlanc, one of several Eagles backups being used in the secondary due to injuries during the regular season.

“I just think we had to find our rhythm,” Brees said. “I tried to take a shot on the first play. Unfortunately, that didn’t work.”

After the first quarter, though, a lot worked for New Orleans.

Foles completed all five throws on a 76-yard drive capped by Jordan Matthews’ 37-yard TD catch. The Eagles, who quickly fell behind 17-0 in that previous Superdome loss, suddenly led 7-0.

Not long after, a 75-yard drive highlighted by a 30-yard pass to Jeffery ended with Foles’ short leap over the goal line for a 14-0 edge.

Indeed, the visitors were in control until Lattimore picked off Foles’ deep throw to Zach Ertz. The Saints showed plenty of moxie on their 79-yard march to a touchdown, faking a punt at their 30, with Taysom Hill running 4 yards for a first down. They also went on fourth-and-goal from the 2, and Philadelphia’s rapidly depleting defense surrendered Kirkwood’s 2-yard touchdown.

With Brees finding the range and his receivers finding loads of room to roam, New Orleans crept to 14-10 at halftime on Lutz’s 45-yard field goal.

Maybe the Saints were rusty after their wild-card bye, but they got two first downs, including one by penalty, gained 17 yards, and Brees threw an interception and had a fumble that was recovered by teammate Ryan Ramczyk in the opening period. Meanwhile, Philly gained 153 yards and scored two TDs, and Foles went 8 of 9 for 113.

But Foles was intercepted by Lattimore early in the second quarter, and the Saints finally got going.

In a span of three plays, two starters were hurt and needed to be carted off.

Philly also lost DB Rasul Douglas in the second quarter to an ankle injury, but he was back in the second half. DLs Fletcher Cox, an All-Pro, and Michael Bennett also were sidelined at times before returning. In the fourth quarter, left tackle Jason Peters left.

The Saints host the Rams in the early game next Sunday, with the winner going to the Super Bowl.