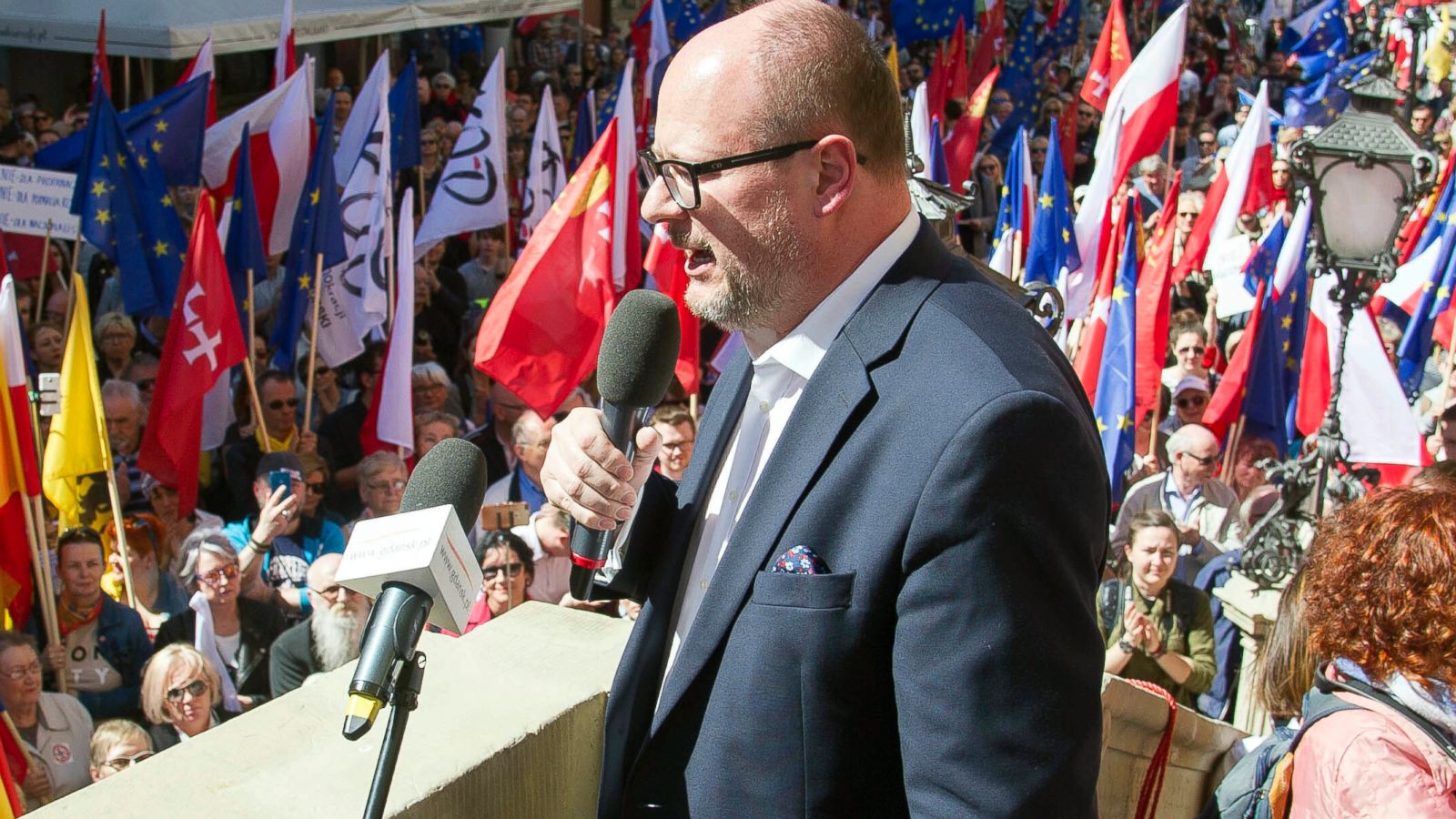 WARSAW, Poland — The Latest on the stabbing of a Polish mayor (all times local):

Polish Justice Minister Zbigniew Ziobro says prosecutors are looking closely at the trial five years ago of the man accused of stabbing the mayor of Gdansk and wounding him severely.

The suspect in Sunday’s stabbing of Pawel Adamowicz was convicted of involvement in bank robberies and served the 5½-year prison term in full.

Ziobro, who is also the country’s chief prosecutor, said Monday the term was not very high given the crime, and noted the man was refused parole three times.

Ziobro, a prominent figure in the right-wing government, said he found no words to describe the “evil” of this “terrible event.”

He said the thoughts and prayers of everyone were with Adamowicz’s family, and expressed hope that his life will be saved, but said everything is in the hands of “providence.”

Polish prosecutors say that the man accused of stabbing the mayor of Gdansk is being investigated on suspicion of attempted murder and will also be subjected to a psychiatric examination.

Pawel Adamowicz remains in life-threatening condition after undergoing five hours of surgery for wounds to his heart and internal organs.

Sierak said there are “doubts” as to the mental state of the attacker, who used a 14.5 centimeter (5.6 inch) knife on Adamowicz, and two psychiatrists will examine him.

Prosecutors are also looking into the level of security at Sunday’s public event which was the 27th annual festive collection for a very popular charity.

Doctors list Adamowicz in very serious condition, saying more time is needed before they will know if his life will be saved.

A surgeon involved in treating the mayor of the Polish city of Gdansk said doctors are still fighting to save the politician’s life and that his prognosis is still uncertain.

Pawel Adamowicz, 53, was stabbed in the heart and the abdomen Sunday evening while on stage during a fundraiser by an ex-convict who shouted that it was revenge against the politician’s previous political party. He was taken to the university hospital in the Baltic port city, where he underwent a five-hour operation.

Dr. Tomasz Stefaniak said Monday afternoon that Adamowicz is not conscious or able to breathe on his own and is on a life-support machine.

A Polish doctor says that the prognosis for the mayor of Gdansk remains uncertain after he lost a lot of blood and suffered oxygen deprivation in a knife attack.

Mayor Pawel Adamowicz underwent five hours of surgery after suffering wounds to his heart and internal organs in the Sunday attack by an ex-convict who said it was political revenge on a party Adamowicz formerly belonged to.

Jerzy Karpinski, the chief doctor for the Gdansk region, said Monday that Adamowicz is on life support and that “prognosis for his life and health is uncertain” after he lost a lot of blood that caused hypoxia of the whole body.

He stressed, however, that the 53-year-old Adamowicz is a “relatively young, healthy person with no health issues” and that there is hope his body will cope and his condition will return to normal.

He said the situation should be clearer within some 20 hours.

A Polish police spokesman says a man accused of seriously wounding Gdansk city Mayor Pawel Adamowicz acted out of “irrational” motives and is in custody waiting for questioning by prosecutors.

Mariusz Ciarka said Monday the 27-year-old, who was recently released from prison, appeared to have acted alone. He could face charges of attempted murder that carry up to life in prison.

Ciarka said police were checking how the man got hold of a media pass, and whether it was authentic, as it allowed him to get on stage and stab Adamowicz during a popular nationwide charity event.

A reporter for the Onet news portal, Piotr Olejarczyk, said he himself was admitted to the event just by saying he was an journalist.

The popular annual charity event for hospitals is traditionally cheerful and open, with celebrities, politicians and teenagers collecting money in the streets across Poland and also abroad.

A spokeswoman for Poland’s ruling right-wing party has condemned a knife attack on an opposition city mayor as “barbaric” and has called for less aggression in politics.

Gdansk Mayor Pawel Adamowicz remains in very serious condition after suffering wounds to his heart and internal organs in the Sunday attack by an ex-convict who said it was a political revenge on a party Adamowicz formerly belonged to.

Beata Mazurek of the Law and Justice party said Monday that the attack on Adamowicz should be “absolutely condemned by all, regardless of what side of the political stage they are on, or whether they are politicians.”

She stressed such attack should never have taken place.

Mazurek said politicians in Poland need “greater responsibility for words, for deeds” because “there is no shortage of madmen on both sides” of the political spectrum.

The Polish city of Gdansk is holding a blood collection for its mayor, who remains in serious condition after being stabbed in the heart and the abdomen.

Doctors operated for five hours on Mayor Pawel Adamowicz, who was stabbed during a popular charity event Sunday by a convicted criminal who called it political revenge.

Gdansk is holding a blood collection for Adamowicz on Monday. A rally against violence is also planned.

Gdansk Archbishop Leszek Slawoj Glodz, who was at the hospital during the surgery, said he was praying for a “miracle.”