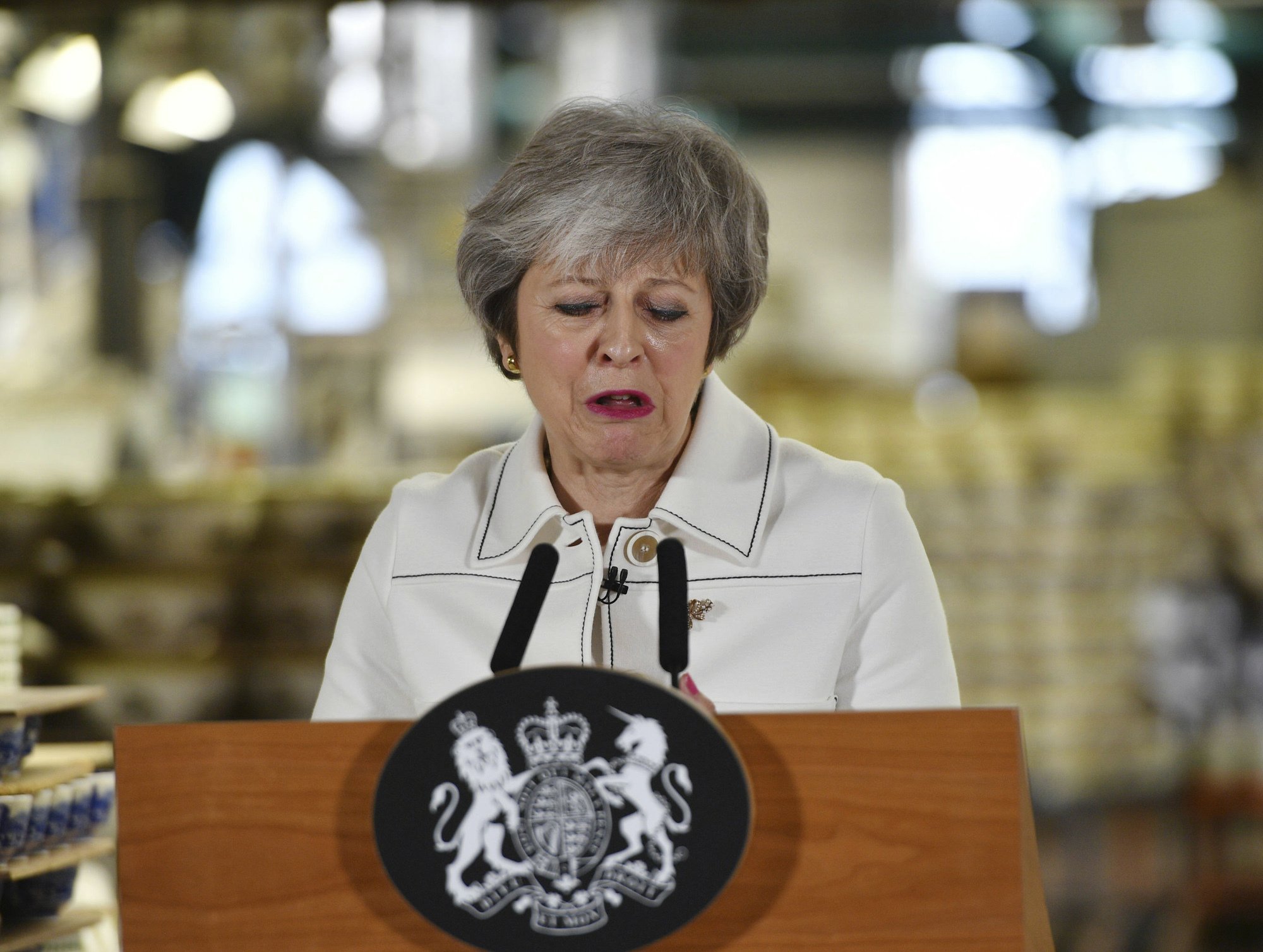 LONDON — British Prime Minister Theresa May offered both a promise on workers’ rights and a reassuring letter from European Union leaders on Monday as she implored British lawmakers to support her floundering Brexit deal.

But the British leader had few concrete measures up her sleeve a day before a vote in Parliament which looks likely to see her Brexit deal rejected. A defeat on Tuesday would throw Brexit plans into disarray just weeks before the U.K. is due to leave the bloc on March 29.

May warned that the only alternatives to her agreement were an economically damaging, chaotic “no-deal” exit from the EU or a halt to Britain’s departure that would defy British voters’ decision in 2016 to leave the bloc.

In a speech Monday at a ceramics factory in the pro-Brexit central England city of Stoke-on-Trent, May said “people’s faith in the democratic process and their politicians would suffer catastrophic harm” if her deal is rejected and Brexit was abandoned.

The other option, leaving the EU without a deal, “would cause turbulence for our economy, create barriers to security cooperation and disrupt people’s daily lives,” she said.

“The only deal on the table is the one (members of Parliament) will vote on tomorrow night,” May said.

Britain and the EU reached a hard-won divorce deal in November, a milestone that should have set the U.K. on the road to an orderly exit.

But the deal has been rejected by both sides of Britain’s Brexit divide. Many lawmakers who back leaving the EU say it leaves the U.K. tethered to the bloc’s rules and unable to forge an independent trade policy, while pro-Europeans argue it is inferior to the frictionless economic relationship Britain currently enjoys as an EU member.

May postponed a vote on the deal in December to avoid a resounding defeat, and there are few signs sentiment has changed significantly since then. Several previously opposed British legislators have swung behind May’s agreement in the last few days, but they remain outnumbered by those determined to vote against it.

In a bid to win support, May sought reassurances from EU leaders about the deal’s most contentious measure — an insurance policy known as the “backstop” that would keep Britain in an EU customs union to maintain an open border between Northern Ireland and EU member Ireland after Brexit.

Pro-Brexit lawmakers worry that Britain could be trapped indefinitely in the backstop, unable to strike new trade deals around the world.

In a letter to May published Monday, European Council President Donald Tusk and European Commission President Jean-Claude Juncker offered an assurance that the backstop “would only be in place for as long as strictly necessary.”

They promised that the EU would work quickly to strike a permanent new trade deal with Britain that would render the backstop unnecessary.

But the letter also reiterated the bloc’s refusal to renegotiate the divorce deal. The two men said “we are not in a position to agree to anything that changes or is inconsistent with the Withdrawal Agreement.”

May will make a statement to Parliament later Monday expanding on the EU commitments.

She also sought to win opposition Labour Party lawmakers’ support for her Brexit deal by promising that her Conservative government won’t try to water down environmental standards and workers’ rights after Brexit.

Some opposition lawmakers’ suspect that the government plans to reduce the protections in a bid to boost the economy after Britain leaves the EU.

If May’s deal is rejected, she has until the following Monday to come back to Parliament with a new proposal. So far, May has refused publicly to speculate on a possible “Plan B.”

Some British lawmakers are exploring ways to use parliamentary procedures to wrest control of the Brexit process away from the government, so that lawmakers by majority vote could specify a new plan for Britain’s EU exit.

But with no clear majority in Parliament for any single alternate course, there is a growing chance that Britain may seek to postpone its departure date while politicians work on a new plan.

Without a Brexit deal, Britain faces an abrupt break from the EU, a scenario that economists warn could batter the British economy and bring chaotic scenes at borders, ports and airports.

Conservative lawmaker Dominic Grieve, who is spearheading efforts to unite Parliament to prevent a no-deal Brexit, said a cliff-edge exit from the EU would be “national suicide.”

“The economic damage which it will do to us will be immense, so that the most vulnerable in our society will be those who suffer most as a consequence,” Grieve said.