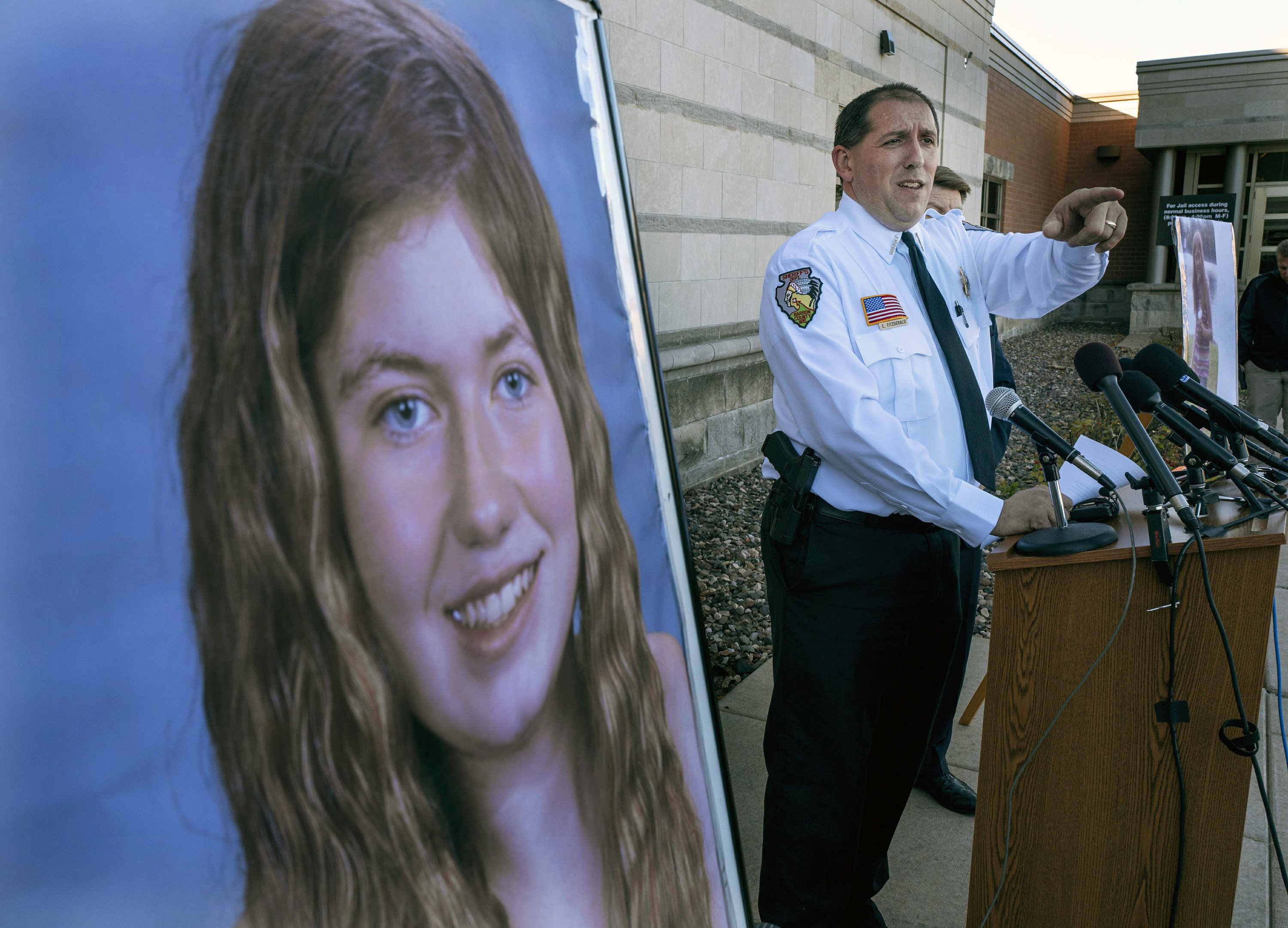 BARRON, Wis. — The Latest on the case of a kidnapped Wisconsin girl whose parents were fatally shot and the man accused of committing the crimes (all times local):

A criminal complaint says a Wisconsin man hid 13-year-old Jayme Closs under a bed for hours at a time and warned her that “bad things could happen to her” if anyone found her there.

Jake Thomas Patterson is charged with kidnapping Jayme and killing her parents in an Oct. 15 attack at the family’s home near Barron.

The criminal complaint filed Monday says Jayme was forced to go under a bed in Patterson’s remote cabin and that he would stack totes, laundry bins and barbell weights around her so she couldn’t move without him noticing. The complaint says Jayme was kept up to 12 hours at a time with no food, water or bathroom breaks.

The complaint says Jayme escaped Thursday after Patterson made her go under the bed and told her he was going to be gone five or six hours. It says she pushed the bins away, crawled out, put on a pair of his shoes and fled the house.

Thirteen-year-old Jayme Closs has told police she tried to hide from the man accused of killing her parents and kidnapping her, but that he dragged her out of her home and threw her in the trunk of his vehicle.

The complaint states that Jayme and her mother hid in the bathroom as Patterson came to the front door. They heard a gunshot and knew Patterson had killed her father.

Patterson then broke down the bathroom door, shot her mother and taped Jayme’s hands and ankles. He then dragged her to his car and threw her in the trunk.

A criminal complaint says a Wisconsin man accused of kidnapping 13-year-old Jayme Closs spotted her getting on a school bus one day and made up his mind to take her.

Jake Thomas Patterson was charged Monday with kidnapping and with killing Jayme’s parents. The criminal complaint says Patterson told investigators he was driving to his job at a cheese factory one day near Almena, Wisconsin, when he stopped behind a school bus and watched Jayme get on.

The complaint quotes Patterson as saying when he saw Jayme, “He knew that was the girl he was going to take.”

The complaint says Patterson went to the Closs home twice with the intent of taking Jayme but was unable to do so because too many people were around before he was able to kidnap her.

A Wisconsin man has been charged with kidnapping, two counts of first-degree intentional homicide and armed burglary in the abduction of 13-year-old Jayme Closs and the slaying of her parents.

Jake Thomas Patterson was arrested Thursday after Jayme apparently escaped from a remote northwestern Wisconsin cabin where she says she was held.

Patterson was charged on Monday.

Investigators say the 21-year-old man broke into James and Denise Closs’ home near Barron, Wisconsin on Oct. 15 by blowing the front door open with a shotgun. Jayme’s parents were shot to death and the teenager vanished the same day.

Investigators believe Patterson planned to abduct Jayme but say they don’t know what led him to target her.

A Wisconsin sheriff says 13-year-old Jayme Closs had a smile on her face when he saw her Sunday, just days after she fled the remote cabin where she says she was held for three months.

Barron County Sheriff Chris Fitzgerald said it was the first time he had met Jayme since she apparently escaped from her captor on Thursday.

Fitzgerald called it “awesome” and a moment he’ll never forget. He says Jayme showed him the room where she is staying with an aunt in Barron, Wisconsin.

Jake Thomas Patterson, the man suspected of abducting Jayme and killing her parents, James and Denise Closs, was expected to be charged later Monday with kidnapping and homicide.

Photos of the Wisconsin cabin where a man suspected of kidnapping Jayme Closs allegedly held the teenager show an unfinished ceiling, a three-car garage and an empty box of adult female diapers in the trash.

Investigators believe Jake Thomas Patterson broke into Jayme’s home in October, killed her parents and abducted her. She was missing for almost three months before a woman walking her dog near Gordon, Wisconsin, found her on the road. Jayme said she had escaped from Patterson’s cabin nearby.

Photos published by the New York Post show the cabin’s living area, complete with a refrigerator, white kitchen cabinets and an old television. The ceiling is not finished.

Exterior shots show a lean-to covering firewood, a three-car garage and an empty box of adult female diapers in a trash can. A sign over the front door reads “Pattersons Retreat.”

Relatives of a 13-year-old Wisconsin girl who was kidnapped after her parents were fatally shot say they aren’t asking the girl to tell them what happened while she was held captive for three months.

Lynn Closs and Sue Allard told “CBS This Morning” that they’re telling their niece they’re proud of her for surviving and escaping. Lynn Closs says her niece’s strength is incredible and that she took the power away from her captor.

The suspect, Jake Patterson, is scheduled to make his first court appearance Monday.

Investigators believe Patterson broke into James and Denise Closs’ home near Barron on Oct. 15, killed the couple and abducted their daughter.

Jayme was missing for nearly three months before she escaped from a cabin in Gordon late last week. She told investigators Patterson had been holding her against her will.

Defense lawyers for the man suspected of fatally shooting a Wisconsin couple and kidnapping their daughter say they believe he can get a fair trial, but they’re not sure where.

Investigators believe he broke into James and Denise Closs’ home near Barron on Oct. 15, killed the couple and abducted their 13-year-old daughter, Jayme Closs. Jayme was missing for nearly three months before she escaped from a cabin in Gordon late last week. She told investigators Patterson had been holding her against her will.

Public defenders Charles Glynn and Richard Jones say it’s been an emotional time for the community of Barron, and they understand the pain the case has generated.

It’s unclear how Patterson became aware of Jayme, and authorities have found no evidence of any interactions between them. Charging documents released Monday could shed more light on the case.

A man suspected of kidnapping a Wisconsin teenager and killing her parents is due to make his first court appearance.

Twenty-one-year-old Jake Thomas Patterson is expected to appear in Barron County Circuit Court on Monday afternoon, after prosecutors formally charge him with intentional homicide and kidnapping.

Investigators believe Patterson broke into James and Denise Closs’ home near Barron on Oct. 15, gunned the couple down and abducted 13-year-old Jayme Closs. She was missing for nearly three months before she escaped from the cabin in Gordon where she said Patterson had been holding her.

Charging documents could shed more light on the case. It’s unclear how Patterson became aware of Jayme, and authorities have found no evidence of any interactions between them. Her family says they don’t know Patterson.