After years of King’s remarks, why now for the GOP response? 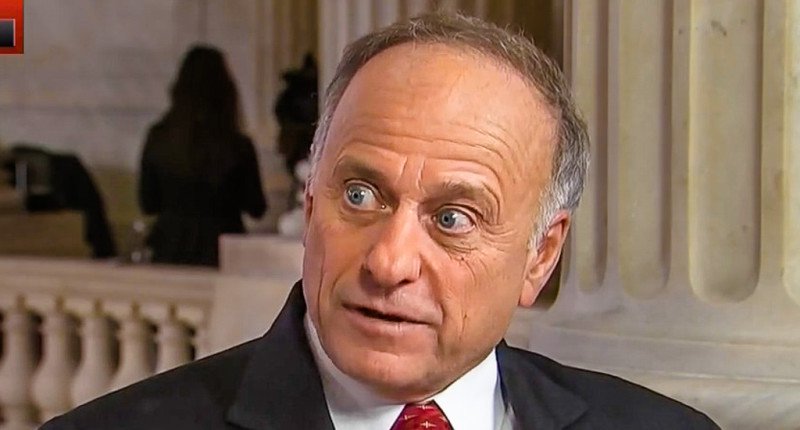 Despite his seemingly endless string of racist comments and insults about immigrants, Iowa Rep. Steve King had the Republican Party’s backing through nine elections and GOP presidential contenders often lined up for his endorsement in the state’s lead-off caucuses.

Now many of those same Republicans are turning their backs on King, stripping him of his committee assignments on Capitol Hill and even calling for him to leave office. A prospective 2020 GOP challenger already has emerged in his district.

The shift comes at a moment when the party is grappling with its stance on racial issues, in part because of President Donald Trump’s own inflammatory racial rhetoric and hardline views on immigration. GOP leaders also have conceded that the party must do better with minority voters and bring more diversity to their own ranks, currently dominated by white men.

There are also signs that King’s track record is wearing on voters in his overwhelmingly Republican district, which he carried by just 3 points in November.

“He barely won in a very, very conservative district and that signaled people are growing fatigued, getting tired of having to put up with some of the unnecessary heartburn,” said Bob Vander Plaats, a Republican who ran for Iowa governor in 2006 and leads the conservative group The Family Leader. “They don’t want to put up with it anymore.”

King’s insensitive remarks have included arguing “we can’t restore our civilization with somebody else’s babies” and predicting chaos if whites are replaced as the nation’s majority.

Don Kass, a former Republican chairman in largely rural Plymouth County, argued that while comments by conservatives often are subjected to the worst-possible interpretation, King never should have discussed such terms as white supremacy. He said party officials might be turning against King because of his narrow win last November, coupled with that fact that his national notoriety translates into fundraising success for his Democratic opponents.

“He had a 3 percent victory that should have been 30 percent, and that’s not going to go away,” said Kass, a county supervisor.

If he seeks re-election, King will face at least one opponent for the Republican nomination, as state Sen. Randy Feenstra announced last week he’s seeking the seat.

Congressional leaders acknowledge King has a history of offensive statements, often in reference to immigrants and racial minorities.

Most Iowa Republicans backed King before the 2018 election, despite his praise of a nationalist party in Austria with Nazi ties and a tweet endorsing a white nationalist candidate for Toronto mayor. Among those who didn’t, though, was Rep. Steve Stivers, the chairman of the House Republicans’ campaign committee.

“We must stand up against white supremacy and hate in all forms, and I strongly condemn this behavior,” Stivers said then.

The timing was remarkable, as the GOP’s campaign chief seemed to be encouraging Iowa voters to oust one of their sitting incumbents. Effectively, Republicans were putting the seat at risk at a time when they were already facing the loss of the House.

The uproar over King’s comments comes against the backdrop of Trump’s election and presidency, which has placed the debate over inflammatory racial discourse and white nationalism at the center of American politics in a manner not seen in decades.

The president stoked it in his campaign’s first moments, suggesting when he announced his candidacy that Mexicans crossing the border could be “rapists” or “murderers.” Since taking office, he’s defended white nationalists in Charlottesville, deemed some African nations as “s—hole countries,” described immigration as “an infestation,” all while expressing a preference for immigrants from places likes Norway.

When asked why he was rebuking King but not Trump, House Minority Leader Kevin McCarthy of California stuck to his role leading fellow congressional Republicans.

“All I know is Steve King is a member of the conference,” he said. “I am the leader of the Republican conference. When I see someone use the terms that Steve King used there’s no place in this country for it.”

Senate Majority Leader Mitch McConnell of Kentucky, when asked Tuesday why he hadn’t spoken out about King until now, said, “I haven’t been following every utterance of Congressman King, but I certainly followed this one. And I think the House Republican Conference did the right thing.”

Iowa Sen. Joni Ernst, who has supported King for years, noted she had pushed back on some of his earlier comments. She called King’s comments to the New York Times “just absolutely disgusting.”

Karen Kedrowski, a political science professor at Iowa State University, said she thinks Republican politicians grew tired of King long ago, but given the nation’s growing diversity that is reflected among the House Democratic majority, they feel they can no longer tolerate his comments.

“This should be a safe district and they’re faced with someone who is always embarrassing them,” she said. “Part of it is they’re fed up and part of it is fear he could lose.”