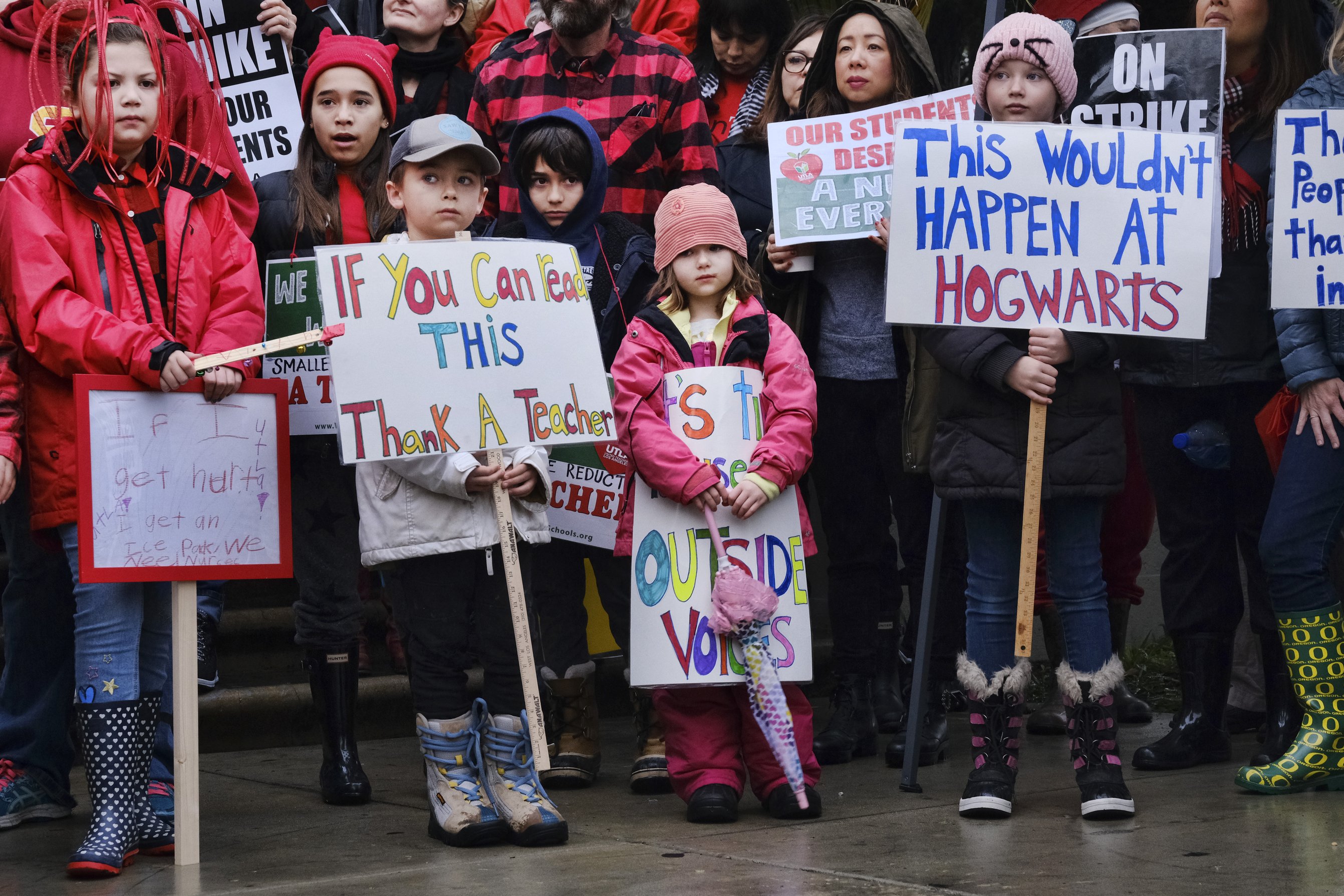 LOS ANGELES — The head of the Los Angeles teachers union hinted at contract talks resuming Wednesday as striking educators in the nation’s second-largest school district protested outside hundreds of schools for a third day.

United Teachers Los Angeles President Alex Caputo-Pearl said the union had engaged Mayor Eric Garcetti to help in the dispute over pay, class sizes and support-staff levels that led to the first strike in 30 years and prompted the school district to staff classrooms with substitute teachers.

Caputo-Pearl provided no further details. The mayor lacks authority over Los Angeles Unified School District, but he has been involved in seeking a resolution.

“We’ll have more information for you later in the day about the bargaining table and when we’re getting back to that bargaining table,” Caputo-Pearl told teachers rallying in the rain outside a high school. No details were announced by sundown.

Parents and children — one holding a sign saying, “This wouldn’t happen at Hogwarts” — joined the picket lines. Rocker and actor Steven Van Zandt, an advocate for arts education, also marched, saying teachers are on the front lines “fighting the war against ignorance.”

District officials are urging the union to resume negotiating, but they have said its demands could bankrupt the school system with 640,000 students.

“I remain available 24/7, anywhere, any time. Whatever it takes we’ll do it,” Superintendent Austin Beutner said on Twitter.

All 1,240 K-12 schools in the district are open — a departure from successful strikes in other states that emboldened the LA union to act. Administrators have hired hundreds of substitutes to replace tens of thousands of teachers, which the union calls irresponsible.

Because state funding is dependent on attendance, the student absences cost the district about $69 million over three days, the district said. At the same time, it doesn’t have to spend millions on teacher pay.

Students who miss classes during the strike will be marked absent, but each school’s principal will decide whether they face consequences, the district said.

Some parents who sent their kids to school wondered how much teaching was happening as students were gathered into large groups.

David Biener said his son and daughter completed worksheets in math and history while sitting on the gym floor at their middle school.

“It’s not an ideal situation, obviously, but there was some learning going on,” he said Tuesday. “It wasn’t a free-for-all.”

The union rejected the district’s latest offer to hire nearly 1,200 teachers, counselors, nurses and librarians and reduce class sizes by two students. It also included a previously proposed 6-percent raise over the first two years of a three-year contract. The union wants a 6.5 percent hike at the start of a two-year contract.

Caputo-Pearl, the union president, said members are “prepared to go as long as it takes” to get a fair contract. The last strike in 1989 lasted nine days.

Beutner, the superintendent, urged the teachers to join him in pushing for more funding from the state, which provides 90 percent of the district’s money.

“The painful truth is we just don’t have enough money,” Beutner said.

The union argues that the district is hoarding reserves of $1.8 billion. It represents more than 30,000 teachers who earn between $44,000 and $86,000 a year, depending on education and experience.