After cover-up trial, officer who shot teen to be sentenced 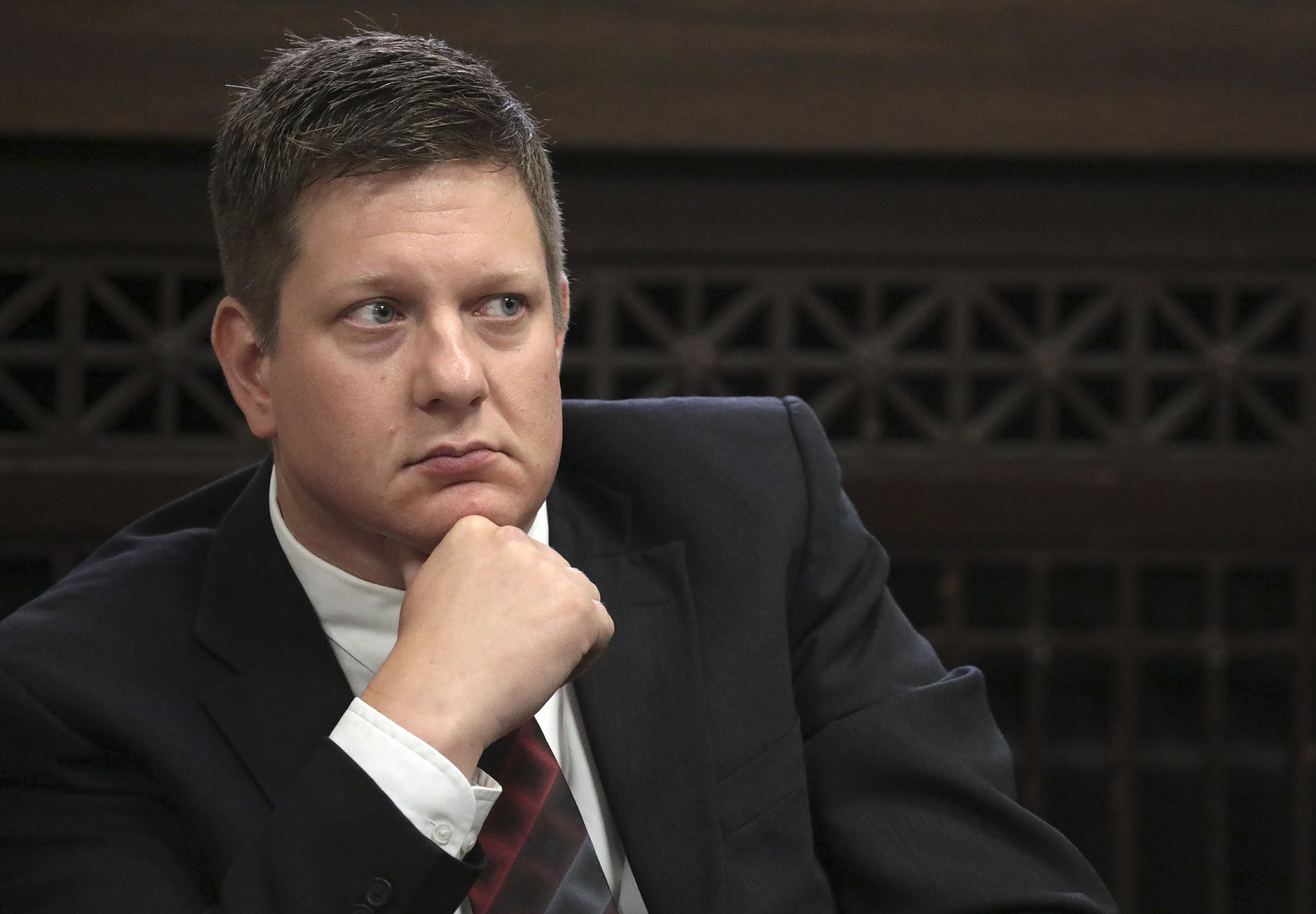 CHICAGO — A judge rejected allegations that the shocking video of Laquan McDonald’s death proved that Chicago police officers tried to stage a cover-up in the fatal shooting of the black teen. Now another judge must decide how long the officer who pulled the trigger spends behind bars.

Jason Van Dyke was convicted in October of second-degree murder and 16 counts of aggravated battery. He will likely go to prison for at least several years, if not decades, when he’s sentenced Friday.

But critics of the police department and protesters who cheered Van Dyke’s conviction are clearly worried after a judge on Thursday acquitted three officers accused of trying to conceal what happened to protect Van Dyke, who was the first Chicago officer found guilty in an on-duty shooting in a half century and probably the first ever in the shooting of an African-American.

“We will be down here tomorrow by the hundreds, and we will cry out for justice for Laquan,” activist Eric Russell said after the hearing in which Cook County Judge Domenica Stephenson acquitted former officer Joseph Walsh, former detective David March and officer Thomas Gaffney on charges of obstruction of justice, official misconduct and conspiracy.

Friday’s hearing will be emotional. Van Dyke’s wife and young daughters, who pleaded for leniency in letters submitted to the judge, will make statements. Court officials do not know if McDonald’s mother, who has remained silent ever since her son’s Oct. 20, 2014, death, will speak.

The courtroom will be packed with activists worried that Judge Vincent Gaughan will impose a light sentence.

Thursday’s verdict “means that if you are a police officer you can lie, cheat and steal,” said a shaken Rev. Marvin Hunter, McDonald’s great uncle.

Stephenson accepted the argument that jurors in the Van Dyke case rejected: that the video that sparked protests and a federal investigation of the police force was just one perspective of the events that unfolded on the South Side.

The judge said the video showed only one viewpoint of the confrontation between Van Dyke and the teen armed with a small knife. She found no indication the officers tried to hide evidence or made little effort to talk to witnesses.

“The evidence shows just the opposite,” she said. She singled out how they preserved the graphic video at the heart of the case.

Prosecutor Ron Safer tried to put a positive spin on the verdict.

“This case was a case where the code of silence was on trial,” he said, referring to the long tradition that officers do not report wrongdoing by their colleagues. “The next officer is going to think twice about filing a false police report. Do they want to go through this?”

Special prosecutor Patricia Brown Holmes said she hoped the verdict would not make officers reluctant to come forward when they see misconduct. Her key witness, Officer Dora Fontaine, described how she had become a pariah in the department and was called a “rat” by fellow officers.

In her ruling , the judge rejected prosecution arguments that the video demonstrated officers were lying when they described McDonald as moving even after he was shot.

“An officer could have reasonably believed an attack was imminent,” she said. “It was borne out in the video that McDonald continued to move after he fell to the ground” and refused to relinquish a knife.

The video appeared to show the teen collapsing in a heap after the first few shots and moving in large part because bullets kept striking his body for 10 more seconds.

The judge said it’s not unusual for two witnesses to describe events in starkly different ways. “It does not necessarily mean that one is lying,” she said.

The judge also noted several times that the “vantage point” of various officers who witnessed the shooting were “completely different.” That could explain why their accounts did not sync with what millions of people saw in the video.

Both Van Dyke’s trial and that of the three other officers hinged on the video, which showed Van Dyke opening fire within seconds of getting out of his police SUV and continuing to shoot the 17-year-old while he was lying on the street. Police were responding to a report of a male who was breaking into trucks and stealing radios on the city’s South Side.

Prosecutors alleged that Gaffney, March and Walsh, who was Van Dyke’s partner, submitted false reports to try to prevent or shape any criminal investigation of the shooting. Among other things, they said the officers falsely claimed that Van Dyke shot McDonald after McDonald aggressively swung the knife at police and that he kept shooting the teen because McDonald was trying to get up still armed with the knife.

McDonald had used the knife to puncture a tire on Gaffney’s police vehicle, but the video shows that he did not swing it at the officers before Van Dyke shot him and that he appeared to be incapacitated after falling to the ground.

Attorneys for the three men used the same strategy that the defense used at Van Dyke’s trial by placing all the blame on McDonald.

It was McDonald’s refusal to drop the knife and other threatening actions that “caused these officers to see what they saw,” March’s attorney, James McKay, told the court. “This is a case about law and order (and) about Laquan McDonald not following any laws that night.”

The lawyers ridiculed the decision to charge the three officers, saying they merely wrote what they observed or, in March’s case, what the other officers told him they saw. And they said there was no evidence that the officers conspired to get their stories straight.

“The state wants you to criminalize police reports,” McKay bellowed at one point.

City Hall released the video to the public in November 2015 — 13 months after the shooting — and acted only because a judge ordered it to do so. The charges against Van Dyke were not announced until the day of the video’s release.

The case cost the police superintendent his job and was widely seen as the reason the county’s top prosecutor was voted out of office a few months later. It was also thought to be a major factor in Mayor Rahm Emmanuel’s decision not to seek a third term.

The accusations triggered a federal investigation, resulting in a blistering report that found Chicago officers routinely used excessive force and violated the rights of residents, particularly minorities. The city implemented a new policy that requires video of fatal police shootings to be released within 60 days, accelerated a program to equip all officers with body cameras and adopted other reforms to change the way police shootings are investigated.