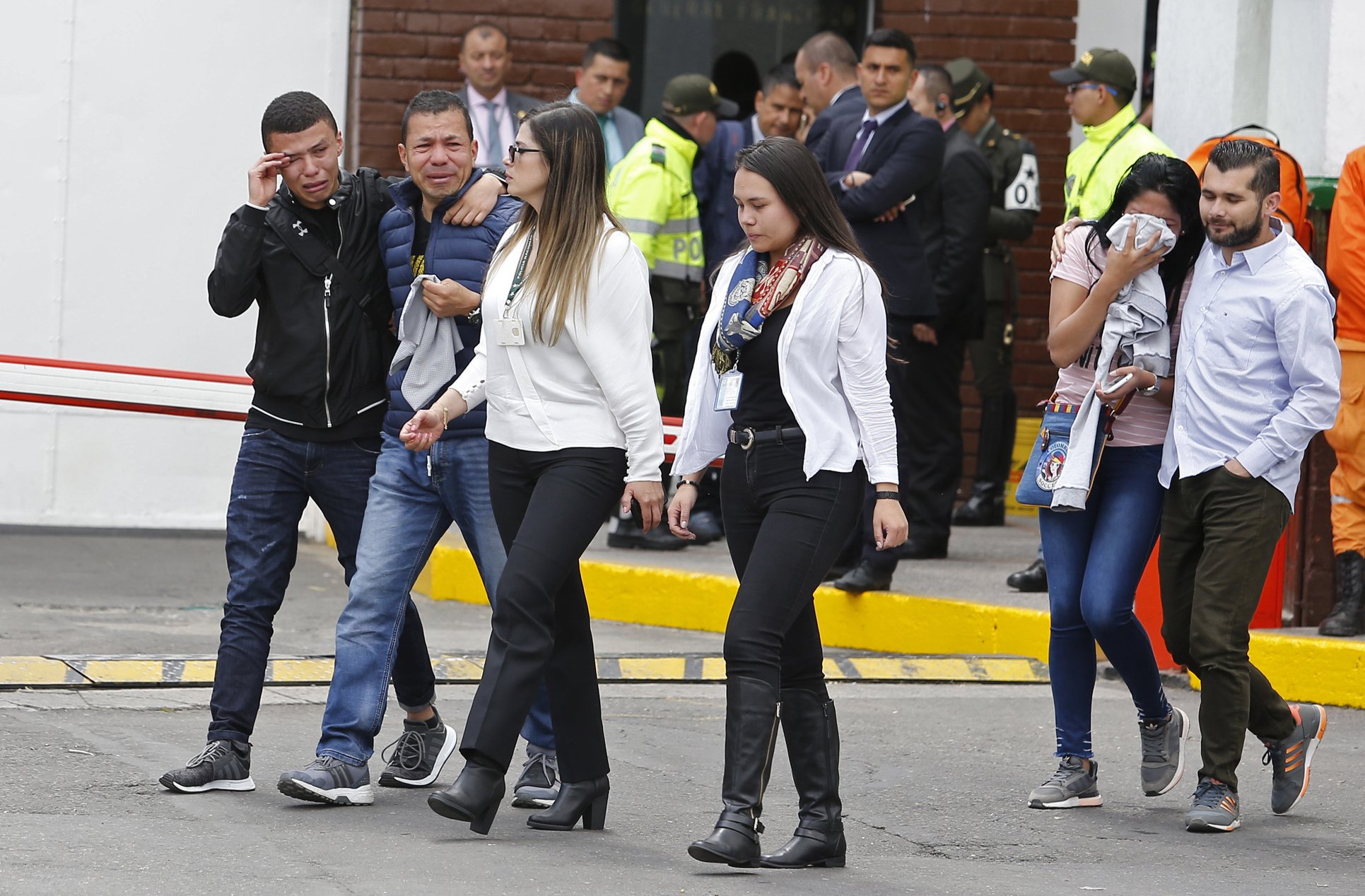 BOGOTA, Colombia — Colombian authorities were scrambling to identify who was behind a brazen car bombing at a police academy in Bogota that has rattled residents and raised tough questions about lingering security threats in the wake of a peace deal with the nation’s largest rebel group.

The Thursday morning bombing, which left 10 dead and dozens injured, was the deadliest in Bogota in years and proved especially unsettling because the target, the General Santander school in southern Bogota, is one of the most protected installations in the capital.

President Ivan Duque, visiting the academy in the aftermath, was careful not to attribute blame to any armed group even while condemning what he called a “miserable” terrorist act that recalled some of bloodiest chapters of Colombia’s recent past.

“The terrorists are looking to intimidate us as a society and attack the state,” Duque said in a televised address. “Colombia will demonstrate that it is a strong state, united and won’t break in the face of the dementia of these aggressions.”

Among those killed was a top-of-class female cadet from Ecuador, while two visiting students from Panama were among those injured

With the help of security cameras, authorities were quick to identify the suspected bomber as a 56-year-old man with no criminal record named Jose Aldemar Rojas. He died in the attack.

Chief Prosecutor Nestor Martinez said Rojas drove a 1993 Nissan pick-up loaded with 80 kilograms (175 pounds) of pentolite explosive past a security checkpoint and onto the school’s leafy campus, where a start-of-the-year honor ceremony had just finished.

There were reports, so far unconfirmed, that when bomb-sniffing dogs detected the explosives the driver got nervous and floored the vehicle past the barrier and onto the campus, where it exploded moments later in front of a red tile-roofed dormitory for female cadets.

Little is known about Rojas. Records show he bought the car last year and had it inspected six months ago in the eastern city of Arauca, near the border with Venezuela.

The same volatile area is a stronghold of the National Liberation Army, or ELN, the country’s last remaining rebel group following a 2016 accord between the government and the Revolutionary Armed Forces of Colombia that saw some 7,000 rebels disarm.

Investigators are reportedly looking into Rojas’ possible ties with the rebel group after reports — so far unconfirmed — that he was a longtime explosives expert for an ELN cell who went by the alias Mocho Kiko.

The ELN has been stepping up its attacks on police targets and oil infrastructure amid a standoff with the conservative Duque government over stalled peace talks. A year ago, the group claimed responsibility for the bombing of a police station in the coastal city of Barranquilla that left five officers dead.

Duque has demanded the ELN cease all attacks and kidnappings as a condition for restarting the talks and has blasted Venezuela and Cuba for allegedly providing a safe haven for rebel leaders even as their troops continue to sow violence in Colombia.

For decades, residents of Bogota lived in fear of being caught in a bombing by leftist rebels or Pablo Escobar’s Medellin drug cartel.

But as Colombia’s conflict has wound down, terror attacks have fallen to historically low levels and residents in turn have lowered their guard, something that magnified the shock at Thursday’s attacks.

“This is the maximum impact any terrorist act could have,” said Jorge Restrepo, director of the Conflict Analysis Resource Center.

Restrepo said he expects the attack to be a defining moment for Duque, who was elected last year on a law and order platform highly critical of his predecessor’s peacemaking but since taking office has taken a more moderate stance.

Amid the tragedy there was an outpouring of solidary.

Dozens of residents stood in line at four collection points throughout the city to donate blood to treat the more than 70 victims.

Lorena Mora, 25, said she spent two anguishing hours trying to find out what happened to her brother, who entered the police school seven months ago. She eventually found him at the police hospital where most of the injured officers were transported. She said he was still stunned but otherwise well, except for a sprained knee.

“When I managed to get inside and see him,” she said, “I felt instant peace.”