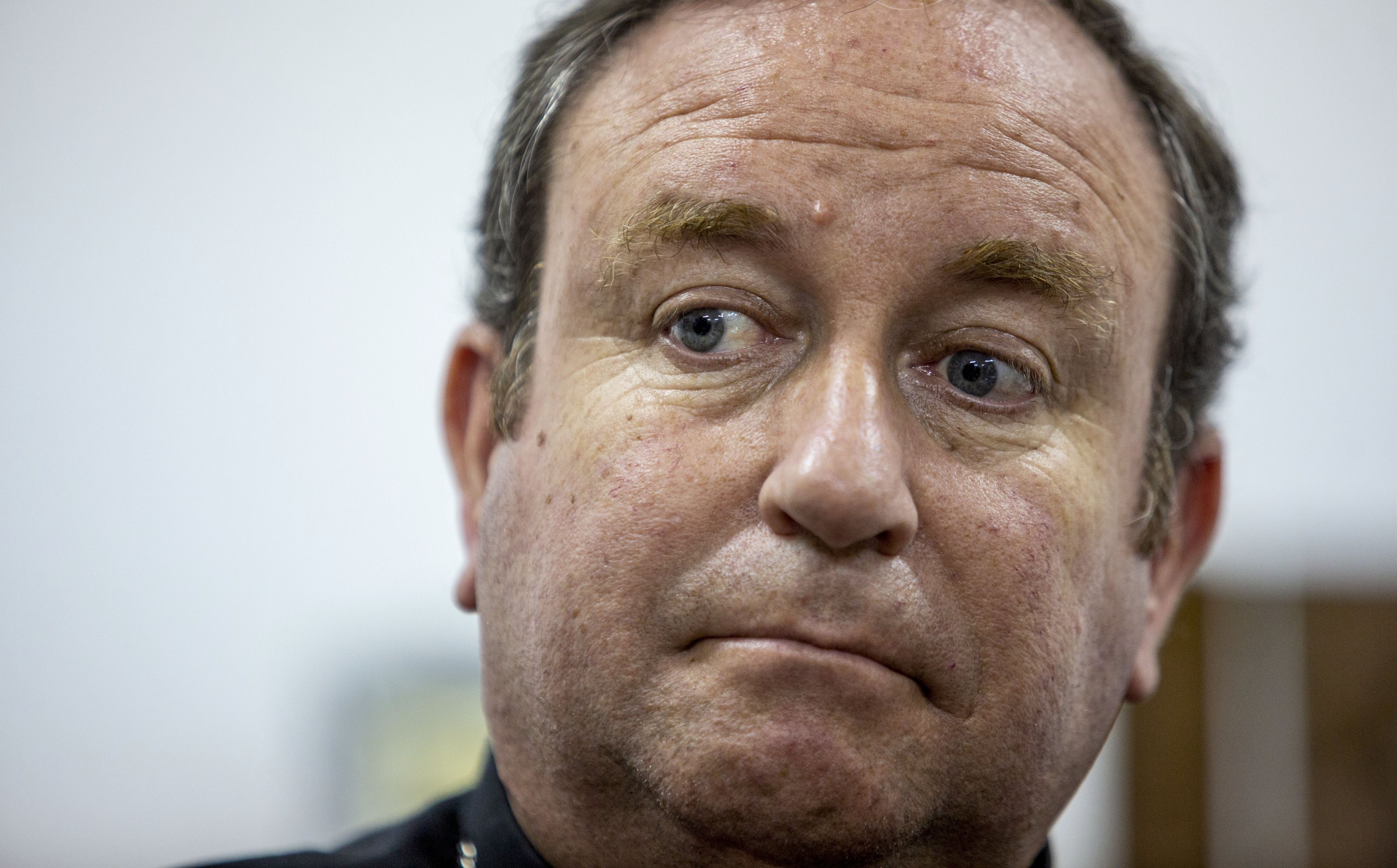 ORAN, Argentina — The Vatican received information in 2015 and 2017 that an Argentine bishop close to Pope Francis had taken naked selfies, exhibited “obscene” behavior and had been accused of misconduct with seminarians, his former vicar general told The Associated Press, undermining Vatican claims that allegations of sexual abuse were only made a few months ago.

Francis accepted Bishop Gustavo Zanchetta’s resignation in August 2017, after priests in the remote northern Argentine diocese of Oran complained about his authoritarian rule and a former vicar, seminary rector and another prelate provided reports to the Vatican alleging abuses of power, inappropriate behavior and sexual harassment of adult seminarians, said the former vicar, the Rev. Juan Jose Manzano.

The scandal over Zanchetta, 54, is the latest to implicate Francis as he and the Catholic hierarchy as a whole face an unprecedented crisis of confidence over their mishandling of cases of clergy sexual abuse of minors and misconduct with adults. Francis has summoned church leaders to a summit next month to chart the course forward for the universal church, but his own actions in individual cases are increasingly in the spotlight.

The pope’s decision to allow Zanchetta to resign quietly, and then promote him to the No. 2 position in one of the Vatican’s most sensitive offices, has raised questions again about whether Francis turned a blind eye to misconduct of his allies and dismissed allegations against them as ideological attacks.

Manzano, Oran’s vicar general under Zanchetta who is now a parish priest, said he was one of the diocesan officials who raised the alarm about his boss in 2015 and sent the digital selfies to the Vatican.

In an interview with AP in the pews of his St. Cayetano parish in Oran, Manzano said he was one of the three current and former diocesan officials who made a second complaint to the Vatican’s embassy in Buenos Aires in May or June of 2017 “when the situation was much more serious, not just because there had been a question about sexual abuses, but because the diocese was increasingly heading into the abyss.”

“In 2015, we just sent a ‘digital support’ with selfie photos of the previous bishop in obscene or out of place behavior that seemed inappropriate and dangerous,” he told AP in a follow-up email. “It was an alarm that we made to the Holy See via some friendly bishops. The nunciature didn’t intervene directly, but the Holy Father summoned Zanchetta and he justified himself saying that his cellphone had been hacked, and that there were people who were out to damage the image of the pope.”

Francis had named Zanchetta to Oran, a humble city some 1,650 kilometers (1,025 miles) northwest of Buenos Aires in Salta province, in 2013 in one of his first Argentine bishop appointments as pope. He knew Zanchetta well; Zanchetta had been the executive undersecretary of the Argentine bishops conference, which the former Cardinal Jorge Mario Bergoglio headed for two successive terms, from 2005-2011.

And by all indications, they were close. Manzano said Bergoglio had been Zanchetta’s confessor and treated him as a “spiritual son.”

All of which could explain why Francis named him to Oran despite complaints about alleged abuses of power when Zanchetta was in charge of economic affairs in his home diocese of Quilmes, which is in the ecclesial province of Buenos Aires which Bergoglio headed.

Earlier this month, the Vatican confirmed that the new bishop of Oran had opened a preliminary canonical investigation into Zanchetta for alleged sexual abuse. But Vatican spokesman Alessandro Gisotti stressed in a Jan. 3 statement that the abuse allegations had only emerged at the end of 2018, after Zanchetta’s resignation and nearly a year after Francis created the new position for him as “assessor” of the Vatican’s financial management office.

At the time of his resignation, Zanchetta had only asked Francis to let him leave Oran because he had difficult relations with its priests and was “unable to govern the clergy,” Gisotti said in the statement.

Manzano said the Vatican had information about sexually inappropriate behavior starting in 2015, with the naked selfies, and reports of alleged misconduct and harassment in May or June of 2017, though he noted they didn’t constitute formal canonical complaints.

After the 2015 report, Francis summoned Zanchetta to Rome, Manzano said. He returned to Argentina “improved, to the point that no one even investigated how those photos got to Rome.”

But as the months passed, Zanchetta “became more aggressive and took impulsive decisions, manipulating facts, people, influences to reach his goals.” Manzano said Zanchetta started coming to the seminary at all hours, drinking with the seminarians and bringing a seminarian with him whenever he visited a parish, sometimes without asking permission of the rector.

“The rector tried to keep the students in order, being present when the bishop appeared, but the monsignor looked for ways to avoid his attention and to discredit him in front of the young guys,” Manzano told AP in an email. “The bad feeling was aggravated when some of them left the seminary. It was then that the rector investigated and warned of harassment and inappropriate behavior.”

In May or June 2017, Manzano, the rector and another priest presented their concerns to the No. 2 in the Buenos Aires nunciature, Monsignor Vincenzo Turturro, “who moved it forward fabulously,” Manzano said. Manzano said he reported about Zanchetta’s alleged abuses of power with the clergy, while the rector reported about the alleged sexual abuses in the seminary. Manzano said he didn’t know the details of the alleged abuses, but he ruled out any acts of rape.

The pope summoned Zanchetta again in July 2017. Returning home, Zanchetta announced his resignation in a July 29 statement saying he needed immediate treatment for a health problem.

Zanchetta spent time in Corrientes before leaving for Spain, where he is believed to have met with one of Francis’ spiritual guides, the Rev. German Arana, a Jesuit to whom Francis had sent another problematic bishop, the Chilean Juan Barros.

Zanchetta largely disappeared from public view until the Vatican, in an official announcement Dec. 19, 2017, said Francis had named him to the new position of “assessor” in APSA, a key administrative department which manages the Holy See’s real estate and financial holdings.

Zanchetta has not publicly responded to the allegations against him. The Vatican has not provided information when asked, other than to say he is not working while the investigation takes its course.

Manzano defended Francis’ handling of the case, saying the pope himself should be considered a victim of Zanchetta’s “manipulation.”

The current bishop of Oran, Bishop Luis Antonio Scozzina, declined to speak to AP on camera, saying he wanted to keep silent until the investigation was in the hands of the Holy See. He has issued a statement urging victims to come forward and provide testimony. But he told AP he didn’t want to create a media circus that might compromise the rights of both victims and accused.

A catechist in the diocese said church leaders had told staff and volunteers not to speak to the media about the allegations at the seminary.

The mother of one seminarian said her son had told her that the allegations of sexual misconduct involving some of his colleagues in the seminary were true. “Unfortunately yes, he told me when I asked him about this,” she said, speaking on condition of anonymity to protect her son.

The scandal, which was first reported by The Tribune newspaper of Salta, has taken its toll in Oran, a deeply conservative community near the Bolivian border.

“I feel a great pain, because as a Christian how can we let these things take place?” asked pensioner Hector Jimenez. Teacher Gianina del Valle Chein said the Vatican should have treated Zanchetta like “like any normal person who did something, and not hide him, take him away to somewhere else so that he can keep doing the same thing.”