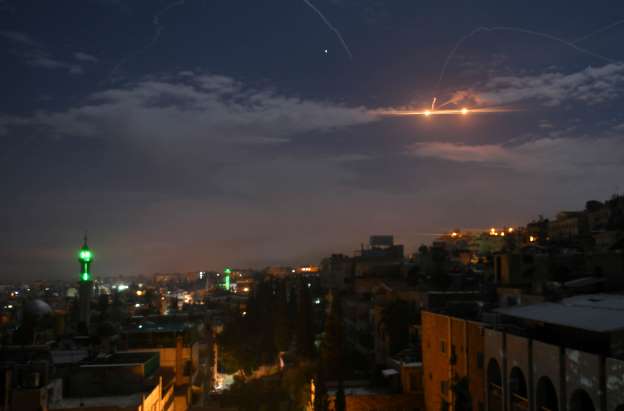 JERUSALEM — Israeli jets struck a series of Iranian military targets in Syria early on Monday, the military said in a rare departure from its years-long policy of ambiguity regarding activities in neighboring war-torn Syria.

The military said the targets included munition storage facilities, an intelligence site and a military training camp. The strikes were in response to a surface-to-surface rocket that Iranian forces fired toward Israel on Sunday that was intercepted by Israel’s Iron Dome missile defense system over a ski resort in the Golan Heights. That followed a rare Israeli daylight air raid near the Damascus International Airport.

The Britain-based Syrian Observatory for Human Rights said Monday’s strikes lasted for nearly an hour and were the most intense Israeli attacks since May. It said 11 were killed in the strikes. The Russian military said four Syrian troops were among those killed. There were no further details on the casualties or their nationalities.

Lt. Col. Jonathan Conricus, an Israeli military spokesman, said the Iranian missile attack that prompted the strong Israeli response was “premeditated.” Iranian forces in Syria fired the mid-range surface-to-surface missile toward Israel from the Damascus area — a missile that had been smuggled into Syria specifically for that purpose, he said. Conricus declined to further identify the type of missile, but said it hadn’t been used in any of the internal fighting of the civil war and had “no business” being in Syria.

Israel only recently acknowledged carrying out hundreds of strikes in Syria in recent years. It previously typically offered only general warnings against allowing Iran to establish a military foothold in Syria and refrained from commenting directly for fear of triggering a reaction and being drawn into the deadly fighting.

Monday’s announcement went a step further, reporting the strikes in real time and detailing the targets.

Conricus would not confirm whether the measures marked an official abandonment of the policy of ambiguity, merely saying that it was a “retaliatory strike against active aggression by Iran.”

He said Israel had sent warnings to Syria ahead of the attack to refrain from attacking Israeli warplanes, but that Syria ignored those warnings and fired anti-aircraft missiles. He said Israel responded by destroying Syrian anti-aircraft batteries. The Russian military said that the Syrian air defenses shot down over 30 Israeli cruise missiles, a claim that was doubted in Israel.

The military said the Mount Hermon ski site has been closed.

Israel holds Syria responsible for allowing the Iranian forces to use Syrian territory as a base of operations against Israel. “Syria yesterday paid the price for allowing Iran to conduct attacks and to plan attacks from its soil,” he said.