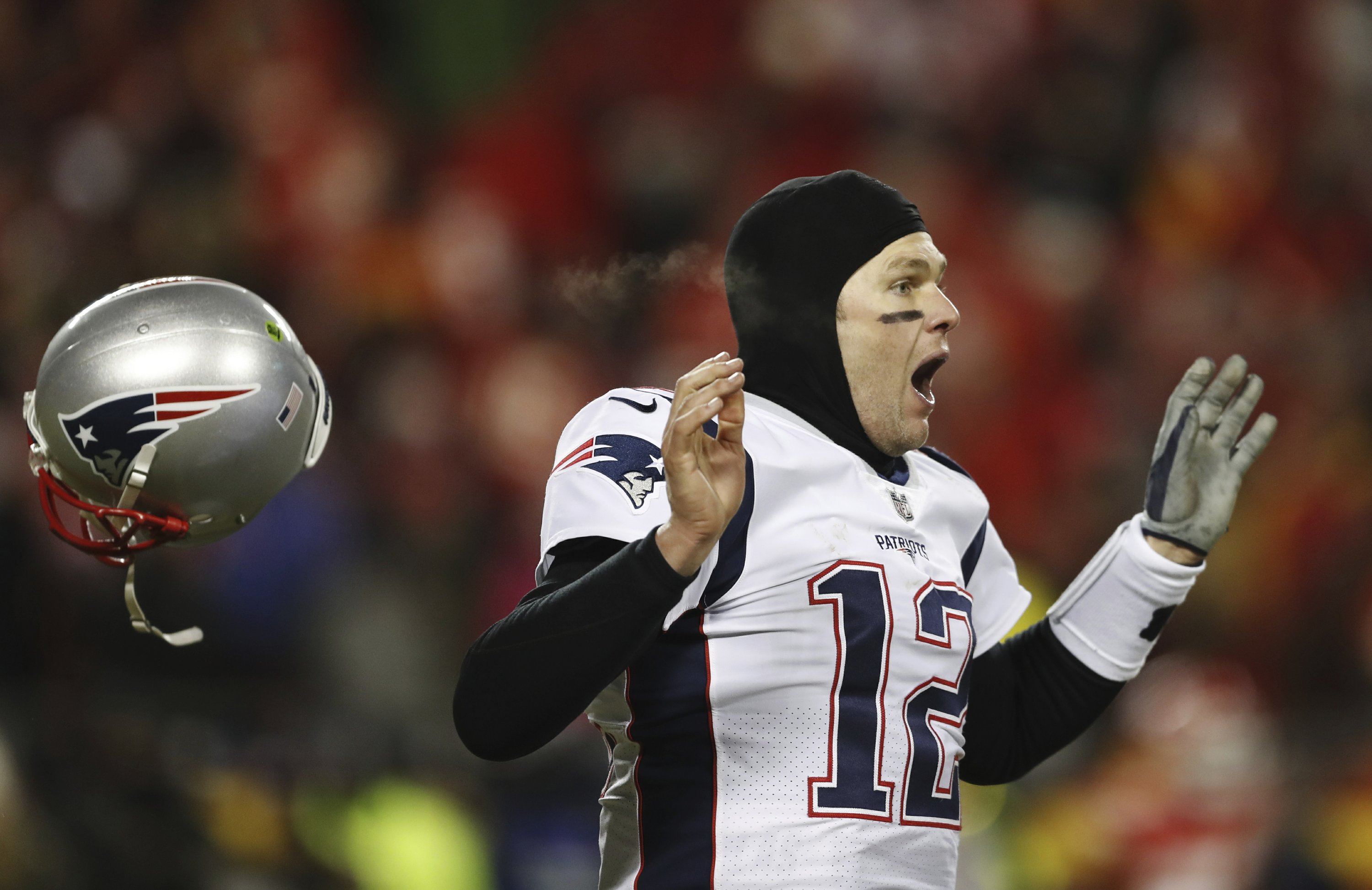 KANSAS CITY, Mo. — It’s the dead of winter, meaning the weather in New England can be brutal. And that the Patriots are headed to the Super Bowl.

It took them overtime and more of Tom Brady’s brilliance to get there — for the third straight year. While the folks back home dealt with a frigid storm, Brady blew through Kansas City’s exhausted defense on a 75-yard drive to Rex Burkhead’s 2-yard touchdown run in a 37-31 victory Sunday for the AFC championship.

The drive, during which New England (13-5) had three third-down conversions, was reminiscent of when the Patriots beat Atlanta in the only Super Bowl to go to OT two years ago.

“Overtime, on the road against a great team,” Brady said. “They had no quit. Neither did we. We played our best football at the end. I don’t know, man, I’m tired. That was a hell of a game.”

Awaiting them in Atlanta are the Los Angeles Rams, who won 26-23 in overtime in New Orleans for the NFC championship. The Rams (15-3) last made the Super Bowl in 2002 while based in St. Louis, losing to the Patriots.

New England benefited from two critical replay reviews and made its ninth Super Bowl with Brady at quarterback and Bill Belichick as coach.

Several times, the Patriots appeared to have it won, only to see Kansas City (13-5) come back in spectacular fashion.

Brady, at 41 already the oldest quarterback to have played in a Super Bowl, drove New England 65 yards in 1:24 to Burkhead’s go-ahead 4-yard touchdown with 39 seconds left in regulation. That was enough, though, for his far younger counterpart, the 23-year-old All-Pro Patrick Mahomes, to take the Chiefs 48 yards to Harrison Butker’s 39-yard field goal with 8 seconds left to force overtime.

It was a sizzling offensive showing in the fourth quarter after defense had been in charge most of the way. Indeed, the Chiefs were blanked in the opening half for the first time all season.

And they never saw the ball in overtime, which along with the two replay decisions might call into play NFL rules and officiating.

“I thought if we got the chance,” Mahomes said, “we’d score.”

Mahomes finished 16 of 31 for 295 yards and three touchdowns.

An apparent muff by the usually reliable Julian Edelman on a fourth-quarter punt return was overturned by a lengthy video review, prompting raucous booing and some demonstrative arguing from the usually laid-back Andy Reid. Edelman definitely touched his next try when Brady’s pass deflected off his hands directly to safety Daniel Sorensen. His 22-yard return set up Kansas City at the Patriots 23, and Damien Williams, who scored three times, had no defender near him down the left sideline for the score that made it 21-17, KC’s first lead.

Back came Brady, engineering a 75-yard march on which Chris Hogan’s diving one-handed catch on third down appeared to touch the ground. Reid challenged — and lost.

Minutes later, rookie Sony Michel scored from the 10, his second TD of the night.

With 3½ minutes remaining, there was plenty of time for more points. Williams’ 2-yard run gave the Chiefs a 28-24 edge that New England took up most of the remaining time overcoming before Butker’s field goal sent it to overtime.

The Chiefs hadn’t been blanked in any half this season, but they barely were a presence in the first 30 minutes, when they had the ball for 8:53. Mahomes was sacked three times for 43 yards; Kansas City’s record-setting attack ran only 16 plays and gained a mere 32 yards.

The zero disappeared quickly in the third quarter. Finally given solid protection, Mahomes unleashed a 54-yard completion to Sammy Watkins over All-Pro cornerback Stephon Gilmore. He then hit another All-Pro, tight end Travis Kelce, on a slant to make it 14-7 — and awaken the slumbering crowd.

But one of several bad decisions further damaged Kansas City when Tyreek Hill, the All-Pro flex player, retreated deep in Chiefs territory returning a punt. Eventually, KC had to punt and the Patriots had excellent field position, setting up a 47-yard field goal by Stephen Gostkowski.

Not one to be shy about innovation, Mahomes completely sidearmed a throw to Watkins for 10 yards on a third down, then a dump-off to Williams covered 33. Kelce drew a pass interference call on J.C. Jackson in the end zone, and Mahomes threw a strike to Williams for the score.

Although the Chiefs were on their heels much of the night, they were down only 17-14.

Just as they did last week in manhandling the Chargers early and cruising, the Patriots delivered a message — and a touchdown — on their first series. It was a classic, covering 80 yards in 15 plays and using up more than eight minutes. Michel, who had 113 yards rushing, scored from the 1.

But Brady made a rare mistakes on the next dominant drive. His third-down pass from the 1 for Rob Gronkowski was short and Reggie Ragland picked it off.

Brady had never thrown an interception from the 1.

When the Chiefs finally got a trademark big play on Mahomes’ 42-yard completion to Hill, it went for naught. Mahomes overthrew a wide-open Williams near the end zone, then took a 14-yard sack to send KC out of field goal range.

The Patriots kept dominating the line of scrimmage, Brady took them 90 yards and connected with Phillip Dorsett over sloppy coverage by Steven Nelson to make it 14-0 with 27 seconds left in the half.

In Week 6, the Patriots beat the Chiefs 43-40 in a game featuring 946 yards total offense. This one had 814. … New England has played in eight straight AFC title games, but this is its first road playoff win since the 2006 season vs. San Diego. … Brady match former Patriots K Adam Vinatieri, now with the Colts, for most wins in NFL history (236). … Kansas City’s defense tied for first in the NFL with 52 sacks, but had none on Sunday. New England had four.

Reid’s decision to defer after winning the opening coin toss proved unwise as New England had 22 plays in the opening period, and Kansas City had seven. Then, the Chiefs lost the more important toss before overtime. Less than five minutes later, they were headed to the offseason.

The Patriots head to Atlanta to play the Rams in the Super Bowl.