The Latest: Plane skids from runway at Chicago airport 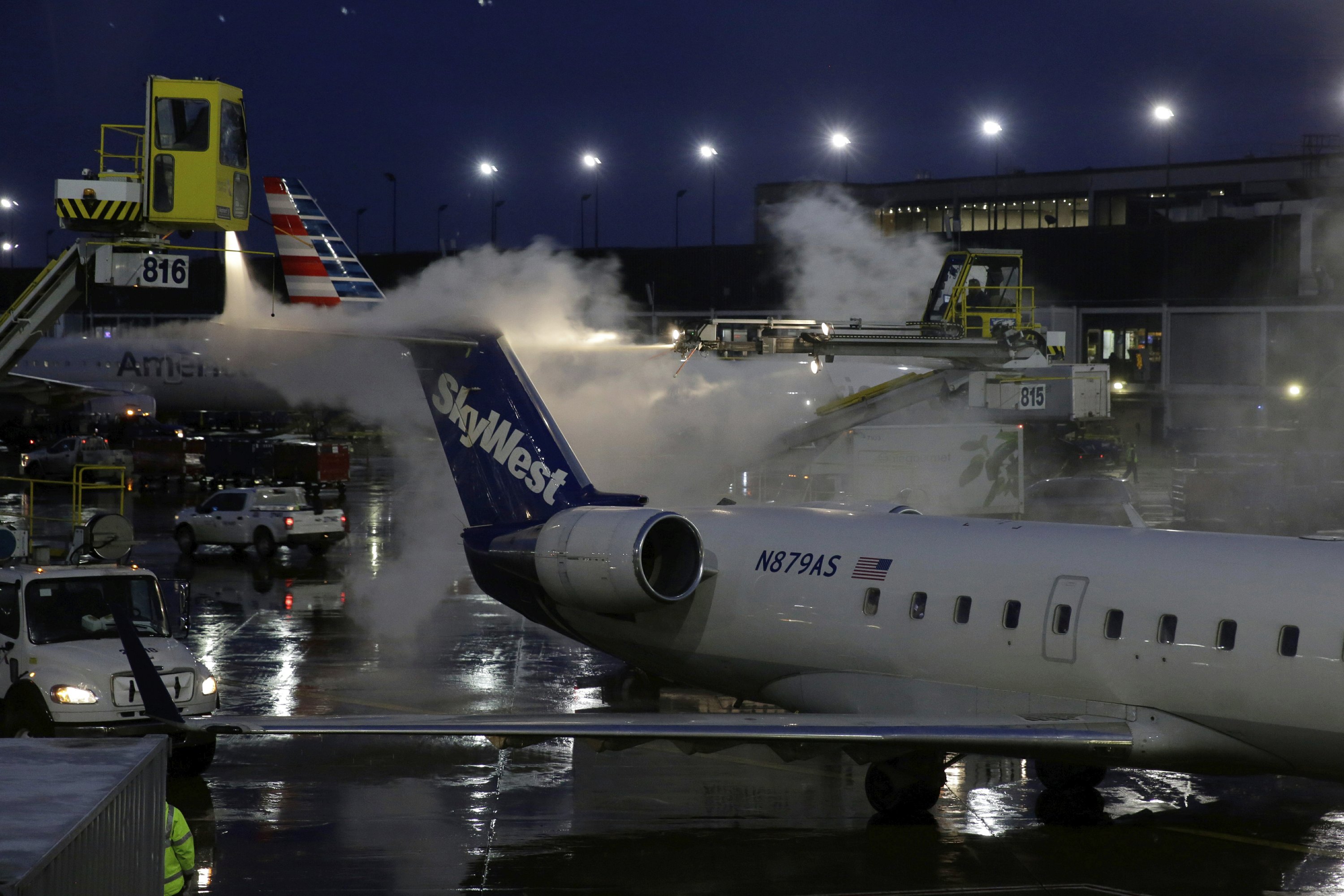 DETROIT — The Latest on a winter storm in the Midwest and New England (all times local):

A United Airlines plane has skidded off a runway at Chicago’s O’Hare International Airport amid snowy and icy weather.

Chicago fire officials say the incident occurred Saturday morning. No injuries were reported. The flight came into the airport from Phoenix and 129 people were on the plane.

A massive winter storm has brought up to 10 inches (25 centimeters) of snow to some parts of the Midwest and is expected to hit the Northeast on Sunday.

The storm prompted the cancellation of nearly 1,000 flights at Chicago’s airports on Saturday. The average delay at O’Hare International Airport was nearly an hour on Saturday afternoon.

Some Midwesterners aren’t letting a winter snowstorm keep them indoors.

Celeste Tremmel was outside in Detroit on Saturday training for a marathon. The 56-year-old chugged slowly through the several-inch-deep snow. She says, “When you run a marathon, you run no matter the weather.”

Tremmel said running in snow is “like running in sand, so you have to go a lot slower,” but “what’s worse is 40 degrees, wind and hail.

Many people across the Midwest woke up to see a coating of snow or ice on Saturday. Areas where the storm had already moved out by midday faced bitter cold and strong winds.

The storm is headed to the Northeast and New England. Some northern parts of New England could see up to 18 inches (46 centimeters) of snow.

New England residents are bracing for up to 18 inches (46 centimeters) of snow in northern regions from a storm that’s coated much of the Midwest in ice and snow.

The National Weather Service says southern areas of New England could see several inches of snow and up to a half-inch (1.25 centimeters) of ice. That’s stoking worries about power outages.

Utility companies are getting ready, especially in parts of Massachusetts, Connecticut and Rhode Island where snow Saturday is expected to be followed by rain, sleet and freezing rain Sunday morning.

The National Weather Service is forecasting the deepest snow for Vermont, New Hampshire and Maine.

In the Midwest, many people woke up Saturday to a heavy and steady snowfall that forced the cancellation of hundreds of flights and made driving dangerous. Areas of the Midwest where the storm system had already moved out by midday are facing bitter cold and strong winds.

People throughout parts of the Midwest have awakened to a heavy and steady fall of snow that’s forced the cancellation of hundreds of airline flights and made driving dangerous.

In the Detroit area, many motorists were moving well below posted speed limits along freeways due to slushy conditions.

The snowfall is part of a wall of hazardous weather trekking from the Dakotas, across the Great Lakes states and into New England. The National Weather Service has warned that conditions in the Northeast “could approach blizzard criteria.”

The storm is expected to bring between up to 10 inches (25 centimeters) of snow to the Midwest before walloping the Northeast on Sunday.

A winter storm is inching its way toward New England after dumping snow and slowing travel for residents in the Midwest and Plains states.

The National Weather Service issued winter storm warnings for the weekend from the Dakotas, across the Great Lakes states and into the Northeast. Forecasters at one point said that conditions in New England “could approach blizzard criteria.”

Authorities in Omaha, Nebraska, on Friday closed Eppley Airfield after freezing rain caused a Southwest Airlines flight to slide off a runway. No one was injured.

The Chicago Department of Aviation reported more than 300 flights at O’Hare and Midway airports were canceled as of Friday evening.

The storm was expected to bring up to 10 inches (25 centimeters) of snow to the Midwest before walloping the Northeast on Sunday. In New York City, the worst of the storm is expected from Saturday afternoon through Sunday afternoon.