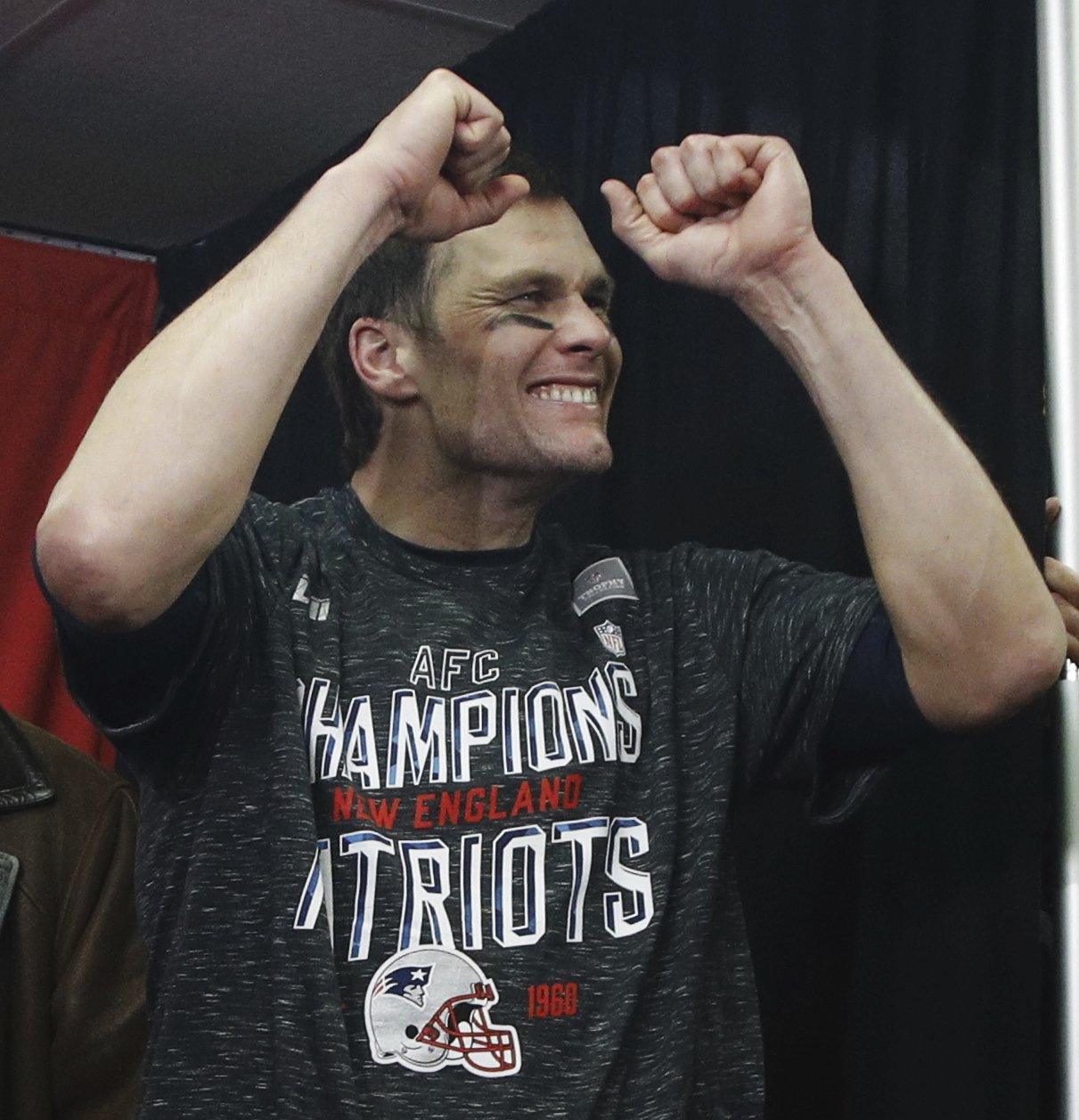 FOXBOROUGH, Mass. — Tom Brady smiled his way through the week leading up to Sunday’s AFC championship game, mostly brushing aside questions about being an underdog for one of the few times during the Patriots’ unprecedented run of titles.

But when Rex Burkhead crossed the goal line for a 2-yard touchdown to give New England a 37-31 overtime win over the Kansas City Chiefs, Brady let joy alter his usual coy demeanor.

He ripped off his helmet and leapt wildly in the air as his teammates rushed the field around him. The Patriots were heading back to another Super Bowl.

It will mark their third straight appearance for the Patriots and ninth overall for Brady, who again will be chasing a record sixth ring.

A victory over the NFC champion Los Angeles Rams would also put an emphatic stamp on what may have been the Patriots’ toughest road to a Super Bowl since Brady and Bill Belichick earned their first ring together in 2001.

“The odds were stacked against us. It hasn’t been that way in a while and it certainly was this year,” Brady said.

The obstacles that Brady referred to occurred both on and off the field for this latest incarnation of the Patriots.

The offseason saw the departure of several key players from last year’s team that came up short in a Super Bowl loss to Philadelphia. Receiver Brandin Cooks was traded to the Rams and cornerback Malcolm Butler, running back Dion Lewis, receiver Danny Amendola, and offensive linemen Nate Solder and Cam Fleming all left in free agency.

Then came news that stalwart receiver Julian Edelman would be suspended for the first four games of the regular season for violating the league’s policy on performance enhancers.

It helped contribute to a surprise 1-2 start and the first — albeit small — signs of age for the 41-year-old Brady.

New England took a chance and traded for receiver Josh Gordon after Cleveland decided it was time to part ways with him. His arrival helped calm things and contributed to six consecutive victories.

But questions returned after a lopsided Week 10 loss at Tennessee that exposed vulnerabilities on both sides of the ball. The Patriots won their next two, but then suffered a fluky last-second loss at Miami.

That was followed by a loss at Pittsburgh and the abrupt loss of Gordon when he was suspended indefinitely by the NFL for violating an agreement that allowed him to play after multiple drug suspensions.

Still, despite facing the prospect of not having their usual home-field advantage in the postseason, the Patriots rediscovered their run game and offensive efficiency during wins over the Bills and Jets to close the regular season.

Brady threw for four touchdowns and had his highest quarterback rating of the season in the 38-3 victory over the Jets. It set the stage for a vintage performance by Brady in their divisional-round playoff win over the Chargers. And on Sunday against Kansas City, he had 348 yards passing despite throwing two interceptions.

He also got support from a resurgent defense and revamped rushing attack on offense. The latter has gotten back-to-back 100-yard rushing games from rookie Sony Michel, who set a rookie NFL playoff record with five touchdowns in his first two postseason games.

Also making huge contributions in the fourth quarter and OT against the Chiefs were both Edelman and tight end Rob Gronkowski.

Gronk’s regular season was mostly underwhelming as he dealt with nagging injuries, but he was surehanded at the perfect time against Kansas City, catching six passes for 79 yards. Edelman had seven catches for 96 yards as both came through with huge third-down catches late in the game.

Gronk said he took his cues from Brady.

“You’re always comfortable with Tom going down on drives,” said Gronkowski, who is the first tight end with 1,000 postseason receiving yards. “He’s always ready for these moments. And that’s why he’s the best quarterback — hands down.

“It was one of the sweeter victories definitely of my career.”

The Patriots will have a chance to top it in two weeks in Atlanta.

Safety Devin McCourty said it’s a position they always thought they’d be in.

“This year was a tough one. We battled some things. We’ve been questioned and doubted by a lot of people. But I think the great thing is we trust in what we believe. Our faith never wavered inside the locker room.”