Tennis players can cause quite a racket by smashing rackets 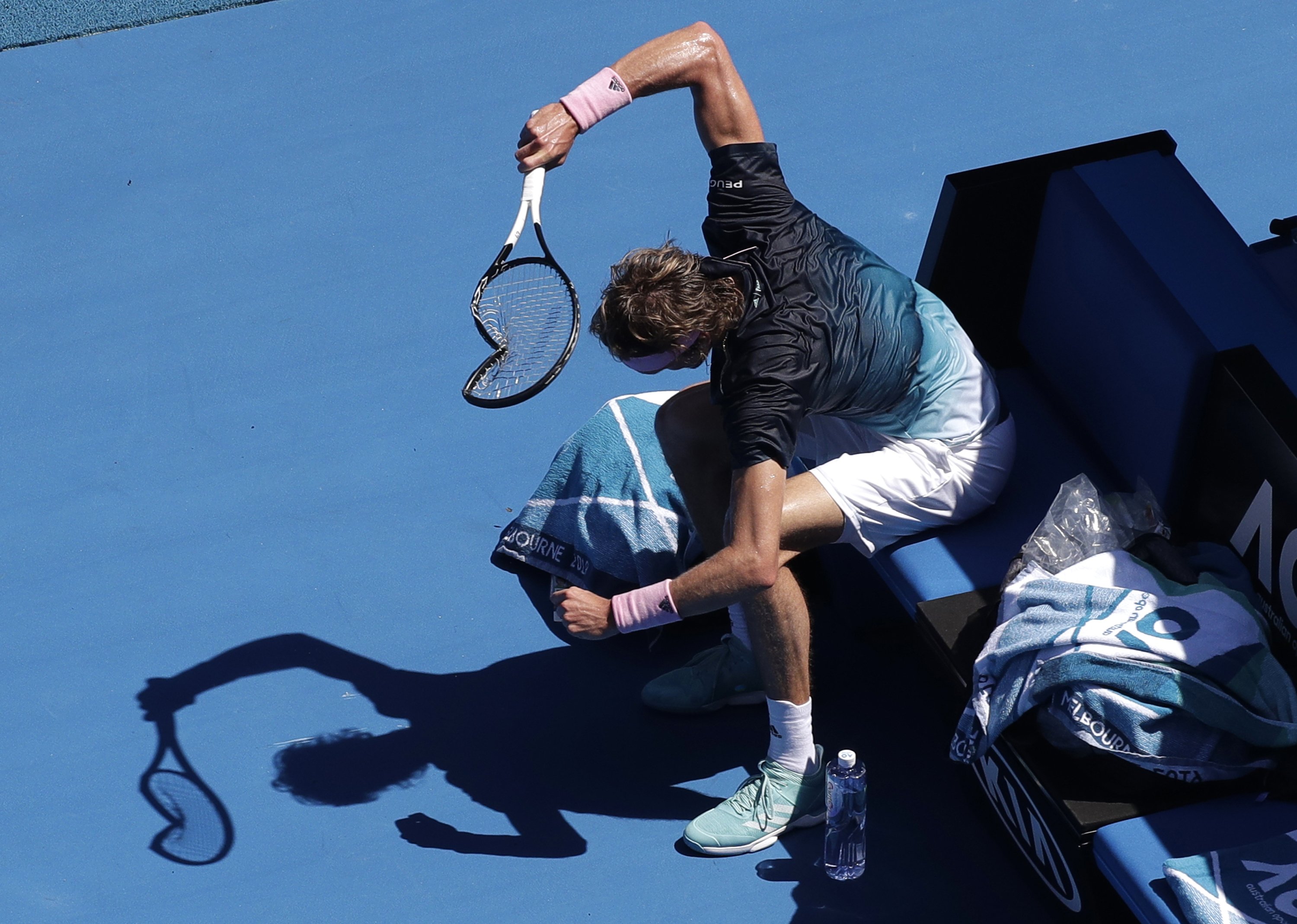 MELBOURNE, Australia — Way behind in a match he soon would lose, Alexander Zverev leaned forward in his Australian Open sideline seat to repeatedly, and violently, crack his racket against the court with a reverberating THWACK — one, two, three, four, five, six, seven, eight times in all, before throwing down the offending, and now-mangled, piece of equipment.

Caused quite a, well, racket.

“I heard it,” said Zverev’s opponent Monday, 2016 Wimbledon finalist Milos Raonic. “I don’t think I looked over. I think it was pretty clear what was going on.”

It certainly was not unusual. Smashing, spiking, bouncing or otherwise harming rackets is the most public form of anger, um, mismanagement in professional tennis, done all the time by all kinds of players, whether they are men or women, famous or unknown, seeded or otherwise, winning or losing. Over the first week of the Australian Open, Naomi Osaka, Dominic Thiem,Ryan Harrison and Daniil Medvedev, just to name a few, joined Zverev in producing GIF-worthy outbursts.

For better or for worse, racket-breaking is as inescapable an element of the sport as forehands and backhands, often revealing frustration, sometimes reversing the course of a contest, usually resulting in a fine of thousands of dollars, and even — as was the case with Serena Williams during her U.S. Open final loss to Osaka last September — occasionally costing a player a point (in Williams’ case, because of an earlier warning).

“I love it!” exclaimed Henri Leconte, the 1988 French Open runner-up.

“I mean, sure, it’s not good for kids to see,” he said. “But sometimes, it’s very important to show emotion. … In my generation, we had so many players who did that: John McEnroe was doing it a lot; Goran Ivanisevic was breaking rackets. Sometimes, when you see your opponent doing that, you say: ‘Oh, he’s really upset. That’s good.’ But if you were playing McEnroe, you were in trouble, because he played better afterward.”

Current players will cite McEnroe or Andy Roddick or Marat Safin, among others, when the subject is raised. They’ll talk about all-time classic displays, such as three-time major champion Stan Wawrinka’s signature move of bending a racket in half over his knee, the way a Major League Baseball slugger might try to break a bat. Or Marcos Baghdatis reaching into his bag for additional rackets during a changeover at the 2012 Australian Open (in a match against Wawrinka), until he’d slammed four and discarded them. Or Benoit Paire and his multiple-racket, sitting-then-standing tantrum (in a match against Baghdatis) that drew $16,500 in fines, more than double his prize money from last year’s Washington tournament.

“If we see a guy break a racket, someone will say to me, ‘Ah, yours was better,’” said Baghdatis, the 2006 runner-up in Melbourne.

Leconte is hardly the only one who wonders about what sort of example is being set for children who are watching, especially those who play tennis.

“It’s become all too commonplace. And it seems like other players see it happening and they think, ‘Oh, this is OK to do.’ I think it’s bad modeling, and the rackets are obviously expensive,” said Tracy Austin, the 1979 and 1981 U.S. Open champion. “Emoting is good. We want to see personalities. But actually being destructive is not helpful for anybody.”

Ernests Gulbis, a former top-10 player known for raising racket abuse to an art form, says he wishes he could avoid ever doing it again.

He also admits that’s not likely.

“Sometimes the emotions just take over. It’s a fight. It’s like a gladiator fight. It’s not like you’re laying in bed and can just be relaxed,” Gulbis said. “Emotions just come out. I’m against it, personally, because you can fix your problems on court in a different way. But to be honest, sometimes it helps.”

“It made me feel better. I was very angry, so I let my anger out,” Zverev said Monday.

Didn’t do him a bit of good on the scoreboard, though.

He was trailing Raonic 6-1, 4-1 when he destroyed his racket at a changeover, then proceeded to drop the next two games and the third set, too.

But Osaka, who’ll play in the quarterfinals Wednesday, did appear to get a boost from her racket fling while losing the opening set of what became a three-set victory.

“For me, I tend to keep a lot of things bottled up. I just felt like in that moment, sort of releasing it was easier than just keeping it inside,” Osaka said, “and then maybe I would have dwelled on it for longer.”

Top-ranked Novak Djokovic is a firm believer that the direction of a match can change with a well-timed to-do.

So the 14-time Grand Slam champion is hardly shy about chucking the tool of his trade when the inspiration strikes.

“At times in my career, these kind of situations, when I would scream or throw a racket, it would kind of wake me up and help me to just kind of free myself from that pressure that is just building throughout the match,” Djokovic said. “But there are times when it doesn’t help.”

Fans are sometimes seen begging a player to hand over a messed-up racket as a keepsake. Yet when Djokovic shattered a frame by pounding it against the French Open’s red clay last year, spectators whistled and booed.