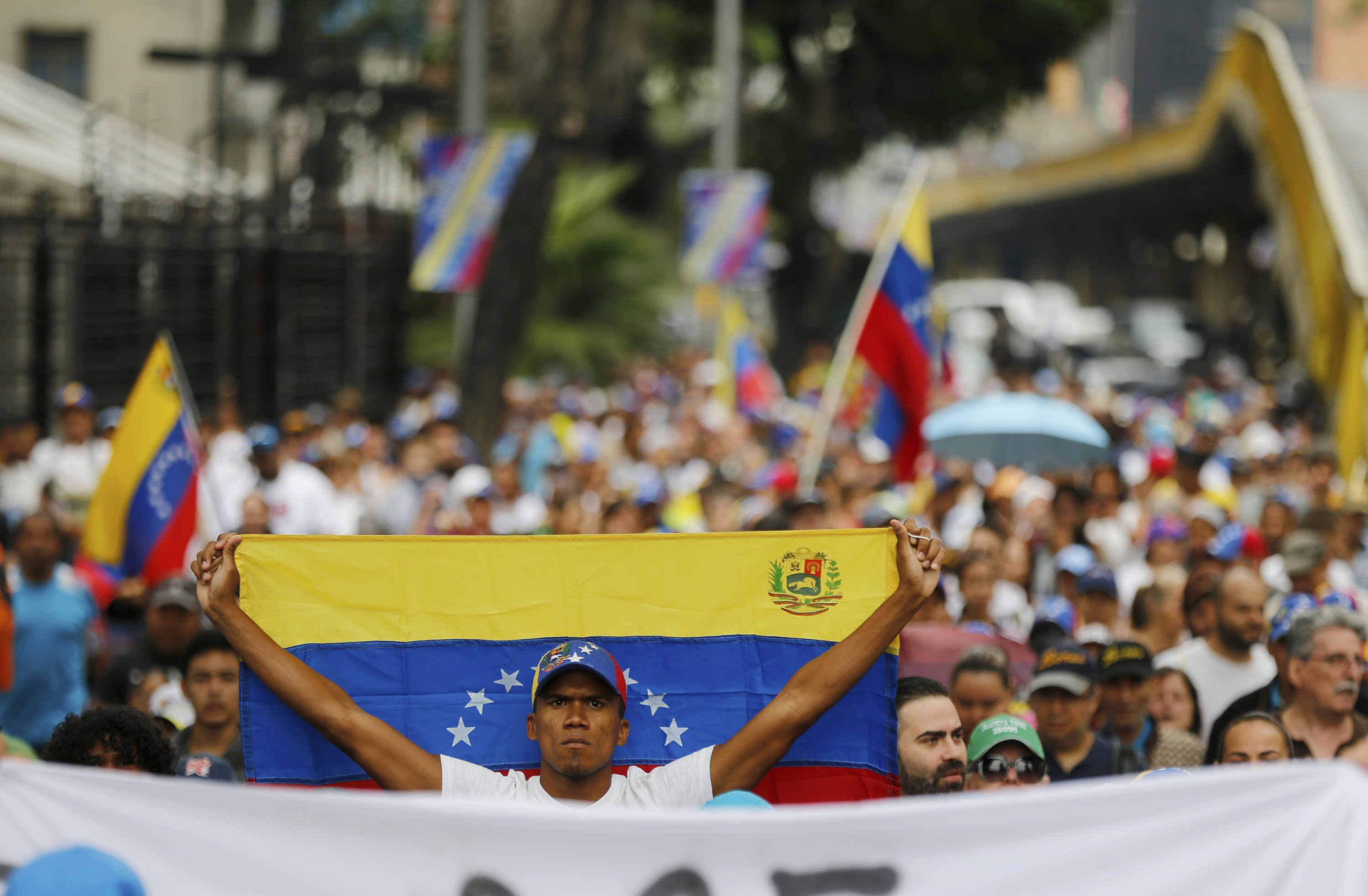 CARACAS, Venezuela — The Latest on nationwide protests in Venezuela (all times local):

President Donald Trump says the U.S. is recognizing the president of Venezuela’s opposition-led National Assembly as the country’s interim president.

The Trump administration has been moving toward such a declaration of support for Juan Guaido ever since Nicolas Maduro was sworn in for a contested second term two weeks ago. Guaido declared himself the interim president before thousands of cheering supporters Wednesday.

U.S. Vice President Mike Pence this week said Maduro is a dictator who did not win the presidency in free and fair elections.

Trump said in Wednesday’s statement that Venezuelans have “courageously spoken” against Maduro and for freedom and the rule of law.

Venezuelans are marching in the streets to demand that Maduro step down, citing spiraling inflation, a shortage of basic goods and a migration crisis that is dividing families.

The NetBlocks observatory said on its website Wednesday: “Social media services are notably disrupted, with Facebook, Instagram intermittently cut off and the disruptions have increasingly affected other services.”

Tens of thousands of people are marching in the South American country demanding that socialist leader Nicolas Maduro step down from power.

The official and aide said on condition of anonymity that Trump is expected to issue a statement recognizing Juan Guaido (GWA-ee-DOH) as the interim president after the Venezuelan parliament votes to appoint him to the post.

The parliament is not expected to convene until Thursday at the earliest. Guaido declared himself interim president on Wednesday.

The official and aide spoke on condition of anonymity because the statement has not been released and the White House had no comment.

The Trump administration has been inching toward such a declaration ever since Nicolas Maduro was inaugurated earlier this month. Maduro was re-elected last year but the opposition in the country says the election was fraudulent and does not recognize him.

Recognition of Guaido by the U.S. would increase international pressure on Maduro to step down and could result in severe economic consequences for his government amid an already painful economic crisis in the once-prosperous oil-producing nation.

Venezuela opposition leader Juan Guaido has declared himself the nation’s interim president before thousands of demonstrators cheering in support.

The 35-year-old lawmaker raised his right hand and said he was “formally assuming the responsibility of the national executive.”

The move comes as tens of thousands march around Venezuelan demanding that the socialist leader Nicolas Maduro steps down from power.

Maduro was sworn in for a contested second term two weeks ago but has been met by international condemnation.

U.S. Rep. Ro Khanna, a Democrat from California, says it is hypocritical for the U.S. government to impose sanctions on Venezuela, but not Saudi Arabia.

“The US is sanctioning Venezuela for their lack of democracy but not Saudi Arabia? Such hypocrisy. Maduro’s policies are bad and not helping his people, but crippling sanctions or pushing for regime change will only make the situation worse,” Khanna wrote on Twitter.

Legislators from both parties have previously criticized the U.S. response to the killing of Saudi journalist Jamal Khashoggi at the kingdom’s consulate in Istanbul last year.

Khanna posted his message while Venezuelans marched Wednesday in the streets demanding that President Nicolas Maduro step down from power.

Powerful socialist party leader Diosdado Cabello is accusing Venezuela’s opposition of being on a mission to “threaten and cause terror.”

At a pro-government rally Wednesday, the head of the all-powerful constitutional assembly said right-wing forces do not represent the majority.

He added that anyone who acts out of line at Wednesday’s protest will be met with justice.

Opposition and pro-government marches are taking place concurrently Wednesday, about two weeks after Nicolas Maduro was sworn into a contested second term.

The marches have at times briefly crossed paths, with government supporters crying out words like “Traitor!” to opposition demonstrators.

Republican Sen. Marco Rubio says that Venezuelan authorities may use “agitators” to employ violence so they can later accuse opposition leaders of terrorism.

The Florida senator wrote on Twitter: “The regime’s response is being directed by #Cuba’s intelligence agency. Expect them to undertake a massive disinformation effort, cut off internet, use agitators to provoke violence & ultimately accuse members of National Assembly of treason & terrorism.”

Rubio posted several messages Wednesday morning in both English and Spanish while Venezuelans marched in the streets demanding that President Nicolas Maduro step down from power.

Venezuelans are marching in the streets and waving their nation’s flag as they demand that President Nicolas Maduro step down from power.

Members of the National Guard launched tear gas at protesters in the middle-class neighborhood of El Paraiso on Wednesday.

Protests in other parts of the city were taking place without any confrontation.

Venezuelans attending the anti-government protest say they are fed up with spiraling inflation, a shortage of basic goods and a migration crisis dividing families.

Demonstrators are shouting phrases like “Get out Maduro!” as they heed the opposition’s call to gather.

Pro-Maduro Venezuelans are also beginning to converge in concentration points for counter-protests organized by the government.

The government has accused the opposition of trying to provoke bloodshed.

The Inter-American Commission on Human Rights is telling the administration of Venezuelan President Nicolas Maduro that social protest and freedom of expression are “fundamental values” in any democratic society.

The human rights body of the Organization of American States says repression of demonstrations through excessive use of force may be a grave violation to fundamental rights.

The commission said in a press release that the Venezuelan crisis has deteriorated since Maduro took office on Jan. 10 for a second six year-term.

The Venezuelan opposition is holding street demonstrations Wednesday in multiple cities throughout the country.

A statue of former socialist Venezuelan President Hugo Chavez has been burnt to a crisp amid a wave of anti-government unrest.

Videos shared on social media late Tuesday show the statue in the city of San Felix in flames as residents bang pots and pans.

While many in Venezuela still hold Chavez in high esteem, statues of his image have been targeted in various protests over the years to show discontent.

Venezuelans are angry over soaring hyperinflation and food and medical shortages, and have taken to the streets this week. They accuse Maduro of usurping power and demand he step down.

At least one person has been killed in a looting incident in southern Venezuela coinciding with bouts of anti-government unrest.

A police report said that a 30-year-old worker named Carlos Olivares was killed Tuesday night in Ciudad Bolivar by four unidentified people who descended from a beige Jeep and fired upon a crowd that had raided a store.

The report was based on an interview with the victim’s sister-in-law.

Ivanka Trump is reiterating the U.S. government’s support for Venezuelans ahead of a forthcoming anti-government demonstration seeking to oust President Nicolas Maduro.

″@Potus, @VP and the whole Administration stand with the people of Venezuela as they seek freedom from the oppression of dictator Maduro,” Ivanka Trump posted on Twitter on Wednesday, in reply to an earlier post by Republican Sen. Marco Rubio.

Pence said Tuesday that Venezuelans have the “unwavering support” of the United States in their effort to restore democracy to their country.

There was an eerie calm on the streets of Caracas early Wednesday ahead of a planned anti-government demonstration seeking to oust President Nicolas Maduro.

Many shops were closed while riot police flanked by water tanks and lightly armored vehicles guarded the emblematic Plaza Venezuela that leads to downtown.

“The world’s eyes are on our homeland today,” he said in an early-morning tweet.

Overnight there were reports of unrest in several working-class neighborhoods of Caracas as residents took to the streets to set fire to barricades demanding Maduro’s resignation.

Venezuela’s re-invigorated opposition faces a crucial test Wednesday as it seeks to fill streets nationwide with protesters in an appeal to the military and the poor to shift loyalties that until recently looked solidly behind President Nicolas Maduro’s socialist government.

The protests have been called to coincide with a historic date for Venezuelans — the anniversary of the 1958 coup that overthrew military dictator Marcos Perez Jimenez. Government supporters are also expected to march in downtown Caracas in a rival show of strength.

The competing demonstrations will come after a whirlwind week that saw an uprising by a tiny military unit, fires set during protests in poor neighborhoods and the brief detention by security forces of the newly installed head of the opposition-controlled congress.