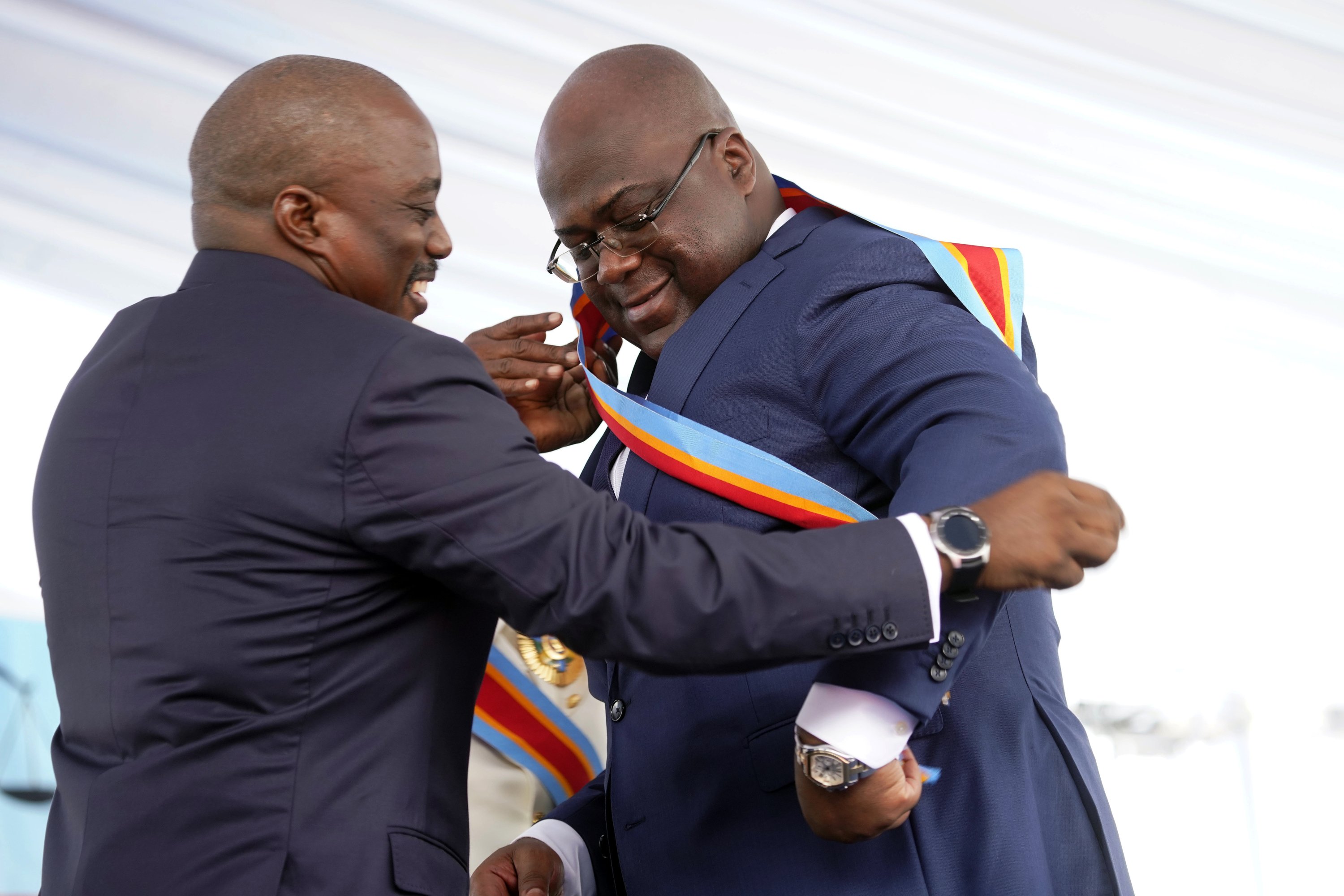 KINSHASA, Congo — Congo’s new President Felix Tshisekedi made news as soon as he was sworn into office on Thursday by announcing he would release all political prisoners and by praising his father, the late opposition icon Etienne, calling him “president” to cheers from the crowd.

He takes over from Joseph Kabila, who led the country since 2001. Kabila quietly watched from behind his mirrored sunglasses the extraordinary scene of an opposition leader becoming president.

Tshisekedi appealed for tolerance and paid tribute to his father, who pursued the presidency for decades but never achieved the post his son has won. The reference to Etienne Tshisekedi as “president” was a nod to his father’s defiant declaration after losing the disputed election in 2011 to Kabila.

Etienne Tshisekedi had posed such a charismatic challenge to Kabila that after he died in Belgium in 2017, Congo’s government did not allow his body to be brought home. His son’s spokesman has said that will be corrected soon.

Questions remain about the disputed Dec. 30 election, but Congolese largely have accepted Tshisekedi’s win in the interest of peace. The new president appealed for tolerance, calling national reconciliation “one of our priorities.”

Just one African head of state, Kenya’s President Uhuru Kenyatta, was seen at the ceremony after the African Union and the international community expressed reservations over alleged election fraud that brought Tshisekedi to power. The United States and others this week have said they will work with the new leader but did not offer congratulations.

Many Congolese hope that Tshisekedi will bring change after Kabila, who in a final address on Wednesday night urged the country to unite in support of the incoming leader. He said he was stepping aside with no regrets.

Tshisekedi now must work with a legislature dominated by members of Kabila’s ruling coalition, likely restricting the chances of dramatic reforms in a country that remains largely underdeveloped and plagued by dozens of rebel groups.

Few had expected an opposition victory in Congo, where Kabila had hung on for more than two years of turbulent election delays.

Declared runner-up Martin Fayulu mounted a court challenge to Tshisekedi’s win, alleging massive rigging and demanding a recount. The Constitutional Court on Sunday rejected it. Outside court, Fayulu accused Kabila of making a backroom deal with Tshisekedi as it became clear the ruling party’s candidate did poorly at the polls.

The new president saluted Fayulu in his speech as a “veritable soldier of the people” and acknowledged the Catholic Church, whose electoral observer mission found that Fayulu had won.

Observers have said Fayulu, an opposition lawmaker and businessman who is outspoken about cleaning up Congo’s sprawling corruption, was seen as a bigger threat to Kabila and his allies in the country of sprawling mineral wealth.

Few Congolese have taken up Fayulu’s call for peaceful protest, appearing instead to accept Tshisekedi’s win as long as Kabila is on the way out.

Congo will not be a nation of “division, hate or tribalism,” the new president declared.

Tshisekedi also vowed to take on the country’s widespread corruption, asserting that billions of dollars are lost per year. He called the revenue brought in “the weakest in the world.”

Congo has trillions of dollars’ worth of mineral wealth but the country remains largely underdeveloped, to the frustration of the population of 80 million people.

The new president briefly paused his inauguration speech before resuming several minutes later and asking the crowd for its understanding. He cited a “small moment of weakness.” A number of people in the crowd earlier had fainted in the heat.