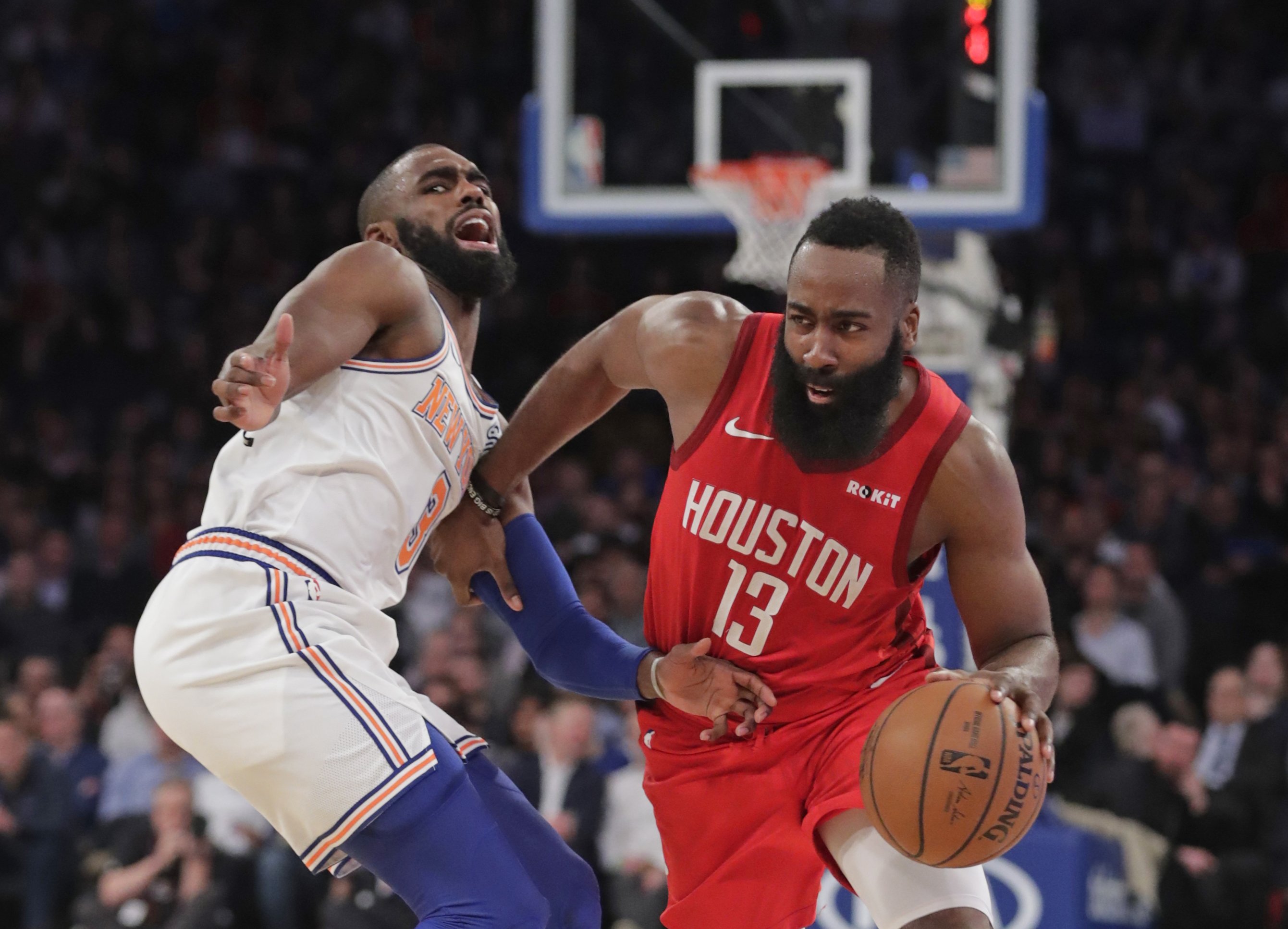 On another spectacular night for the NBA’s most sensational scorer, Harden not only notched his career high with 61 points, but tied Bryant’s record for a visiting player at the current Madison Square Garden.

The Rockets sure needed it.

Harden made the clinching layup with 3.8 seconds remaining after the Knicks turned it over, and the Rockets edged the New York Knicks 114-110 on Wednesday night.

With his final basket, Harden capped his fifth 50-point game this season and a wild stretch of back-and-forth basketball across the final minutes.

“The way we played in the last six minutes, maybe four minutes, we set basketball back at least 10 years,” Rockets coach Mike D’Antoni said. “It was mind-boggling the things we just did. We got the win.”

Eric Gordon made the go-ahead 3-pointer with 9.8 seconds left when Houston couldn’t get the ball to Harden, the NBA’s leading scorer who earlier had passed Chamberlain into fourth place in NBA history with his 21st consecutive 30-point game.

A day after saying he hadn’t yet experienced his Madison Square Garden moment, Harden finished 17 of 38 from the floor. He was only 5 of 20 on 3-pointers but was 22 of 25 from the line and grabbed 15 rebounds in front of a crowd that cheered some of his long jumpers but then booed after he drew foul after foul.

“They couldn’t figure out what they wanted to do,” Harden said. “But I appreciate them though, honestly. Tonight they kept me going and made the game exciting for me.”

Carmelo Anthony holds the overall record at the current MSG with 62 points.

Rookie Allonzo Trier scored a season-high 31 points for the Knicks, who lost their seventh straight game. They lost coach David Fizdale when he picked up his second technical foul and was ejected with 1:08 remaining.

Fizdale said he didn’t know why he was tossed, though referee Pat Fraher said it was for continuous complaining after he’d been warned, leading to a second tech for unsportsmanlike conduct.

The Rockets led by 10 after three, but the Knicks quickly cut into it when Harden was on the bench. New York eventually took a couple late leads — helped at one point when P.J. Tucker inexplicably refused to pick up Gordon’s inbounds pass to allow a layup — but couldn’t hold on, losing for the 15th time in 16 games.

Harden had already surpassed his average of 35.7 points by halftime, putting back the miss of his own shot to beat the buzzer and give himself 36 points and nine rebounds.

Chamberlain still has all three 30-point streaks that were longer. His record is 65 straight, and he also had streaks of 31 and 25 games.

Harden was outscoring the Knicks by himself for most of the first quarter before taking his first rest late in the period with 19 points. The Knicks moved into the lead by the end of the quarter and stayed there the remainder of the half, stretching the lead to 13 before the Rockets trimmed it to 63-58 at the break.

Knicks: Fizdale said Luke Kornet’s sprained left ankle could have been much worse, but that the center would still miss at least a couple weeks. … Tim Hardaway Jr. scored 21 points.

MAKING THEMSELVES AT HOME

The Rockets beat the Knicks for the ninth straight time at MSG. New York’s last home victory in the series was on Jan. 26, 2009, when D’Antoni was the Knicks’ coach. Exactly a week later, Bryant scored his 61 points in a Lakers victory on Feb. 2.

Even with Kornet out, former starting center Enes Kanter couldn’t regain a spot in the rotation and was again frustrated as Fizdale remains committed to evaluating young players on his team, which fell to 10-36.

“They just told me this morning I am starting. The coach said himself today I am starting and now I come to the game and didn’t play,” Kanter said. “I am trying to be a good teammate here, man. The whole league knows I am always with my teammates.”