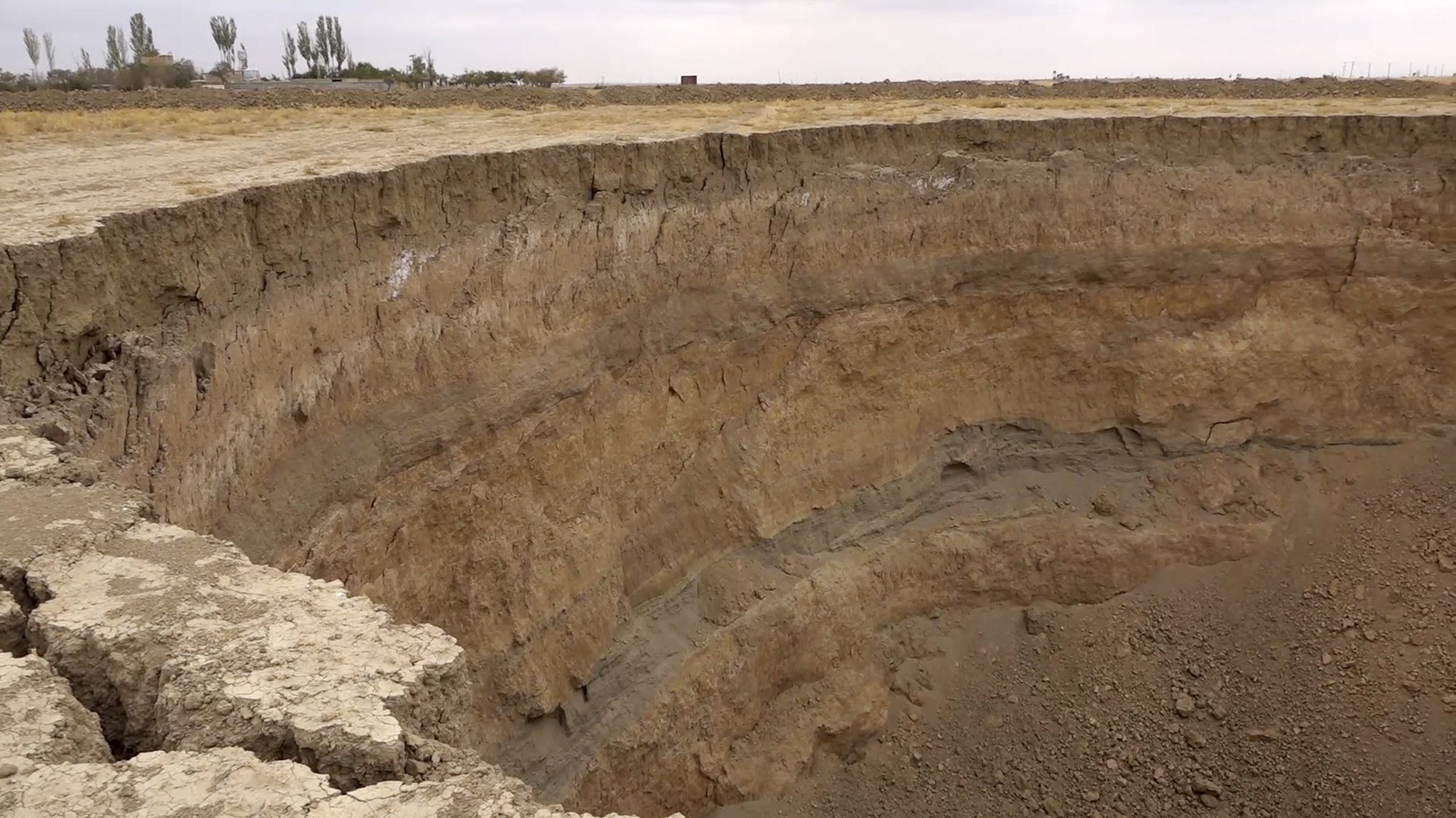 TEHRAN, Iran — Fissures appear along roads while massive holes open up in the countryside, their gaping maws a visible sign from the air of something Iranian authorities now openly acknowledge: the area around Tehran is literally sinking.

Stressed by a 30-year drought and hollowed by excessive water pumping, the parched landscape around Iran’s capital has begun to sink dramatically. Seen by satellite and on foot around the city, officials warn that what they call land subsidence poses a grave danger to a country where protests over water scarcity already have seen violence.

“Land subsidence is a destructive phenomenon,” said Siavash Arabi, a measurement expert at Iran’s cartography department. “Its impact may not be immediately felt like an earthquake, but as you can see, it can gradually cause destructive changes over time.”

He said he can identify “destruction of farmland, the cracks of the earth’s surface, damage to civilian areas in cities, wastewater lines, cracks in roads and damages to water and natural gas pipes.”

Tehran, which sits 1,200 meters (3,900 feet) above sea level against the Alborz Mountains on a plateau, has rapidly grown over the last 100 years to a sprawling city of 13 million people in its metropolitan area.

All those people have put incredible pressure on water resources on a semi-arid plateau in a country that saw only 171 millimeters (6.7 inches) of rain last year. Over-reliance on ground aquifers has seen increasingly salty water pumped from below ground.

“Surface soil contains water and air. When you pump water from under the ground surface, you cause some empty space to be formed in the soil,” Arabi told The Associated Press. “Gradually, the pressure from above causes the soil particles to stick together and this leads to sinking of the ground and formation of cracks.”

Rain and snow to recharge the underground aquifers have been in short supply. Over the past decade, Iran has seen the most prolonged and severe drought in more than 30 years, according to the United Nations’ Food and Agriculture Organization. An estimated 97 percent of the country has faced some level of drought, Iran’s Meteorological Organization says.

That has caused the sinkholes and fissures now seen around Tehran.

Iranian authorities say they have measured up to 22 centimeters (8.6 inches) of annual subsidence near the capital, while the normal range would be only as high as 3 centimeters (1.1 inches) per year.

Even higher numbers have been measured in other parts of the country. Some sinkholes formed in western Iran are as deep as 60 meters (196 feet).

Those figures are close to those found in a study by scientists at the GFZ German Research Centre for Geosciences in Potsdam previously discussed by the journal Nature and accepted by the journal Remote Sensing of Environment. Using satellite images between 2003 and 2017, the scientists estimate the western Tehran plain is sinking by 25 centimeters (9.8 inches) a year.

Either way, the numbers are alarming to experts.

The sinking can be seen in Tehran’s southern Yaftabad neighborhood, which sits close to farmland and water wells on the edge of the city. Cracks run down walls and below windows, and waterpipes have ruptured. Residents fear poorly built buildings may collapse.

Tehran’s oil refinery, a key highway, automobile manufacturing plants and railroads also all sit on sinking ground, said Ali Beitollahi, a Ministry of Roads and Transportation official. Some 2 million people live in the area, he said.

“Rates (for subsidence) are very high and in many instances it’s happening in densely populated areas,” Shafiee told the AP. “It’s happening near sensitive infrastructures like airports, which we consider a top priority.”

Geopolitics play a role in Iran’s water crisis. Since the country’s 1979 Islamic Revolution, Iran has sought to become self-sufficient across industries to thwart international sanctions. That has included agriculture and food production.

The problem, however, comes in inefficient water use on farms, which represents over 90 percent of the country’s water usage, experts say.

Already, the drought and water crisis has fed into the sporadic unrest Iran has faced over the last year. In July, protests around Khorramshahr, some 650 kilometers (400 miles) southwest of Tehran, saw violence as residents of the predominantly Arab city near the border with Iraq complained of salty, muddy water coming out of their taps amid the yearslong drought.

The unrest there only compounds the wider unease felt across Iran as it faces an economic crisis sparked by President Donald Trump’s decision to withdraw America from Tehran’s nuclear deal with world powers.

Israeli Prime Minister Benjamin Netanyahu, who long has opposed Iran’s theocratic government, even released an online video in June offering his country’s water technology in a jab at Iran’s leaders.

Iranian officials shrugged off the offer. But solutions to the water crisis will be difficult to find.

The crisis “stems from decades of sanctions and compounding political mismanagement that is likely to make it very difficult to alleviate the emerging crisis before it wreaks lasting damage upon the country,” wrote Gabriel Collins, a fellow at Rice University’s Baker Institute.

Iranian authorities have begun to crack down on illegal water wells. They also are exploring using desalinization plants along the Persian Gulf as well, though they require tremendous energy. Farming practices also need to change as well, experts say.

“We need to shift our development model so that it relies less on water and soil,” Darvish, the activist, said. “If we don’t act quickly to stop the subsidence, it can spread to other areas.”