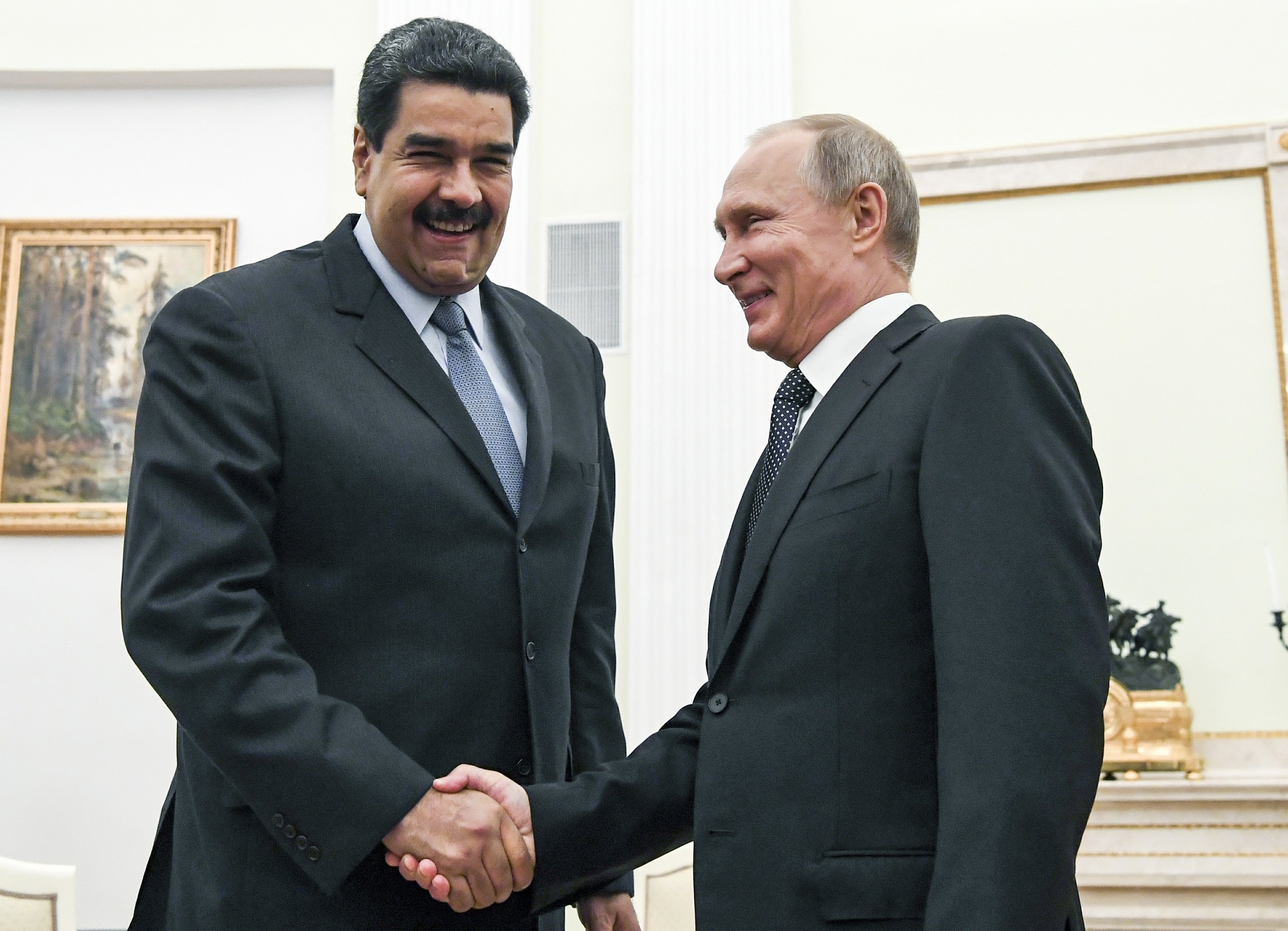 MOSCOW — Russia, China, Iran, Syria and Cuba have come down on one side. The United States, Canada, and countries in Western Europe are on the other.

But Washington’s adversaries are issuing warnings against U.S. intervention. Russian officials have called the move a “coup” orchestrated by the U.S.

The U.S. and Russia already are at odds over Syria’s civil war, and the Venezuelan crisis has the potential to add further strain. Russian-U.S. ties have sunk to post-Cold War lows over Moscow’s support of separatists in Ukraine and allegations of Russian meddling in the 2016 U.S. election.

“We view the attempt to usurp power in Venezuela as something that contradicts and violates the foundations and principles of international law,” said Dmitry Peskov, spokesman for President Vladimir Putin.

Venezuela’s status as a major oil producer — it has the world’s largest underground oil reserves, but crude production continues to crash — means its political instability has deep implications globally.

And Russia has taken a special interest. Last month, Russia sent two Tu-160 nuclear-capable bombers to Venezuela for several days in what was seen as a precursor for a possible long-term military presence.

Pompeo criticized the move at the time as “two corrupt governments squandering public funds and squelching liberty and freedom while their people suffer. Peskov dismissed the comment as “undiplomatic” and “inappropriate,” saying that half of the U.S. military budget “would be enough to feed the whole of Africa.”

Russia’s Foreign Ministry said Thursday the crisis now “has reached a dangerous point” and urged the international community to mediate between the government and the opposition.

Russian Prime Minister Dmitry Medvedev even injected some domestic U.S. politics into the equation, citing the partial government shutdown and the differences between Trump and House Speaker Nancy Pelosi.

“Let’s imagine, just for an instant, how the American people would respond, for example, to the speaker of the U.S. House of Representatives declaring herself the new president against the backdrop of the budget crisis and government shutdown,” Medvedev said on Facebook. “What would be the reaction from the current U.S. president, especially if this move was supported by the leadership of another country, for example, Russia?”

Russia frequently decries popular uprisings like the “color revolutions” that have taken place in Ukraine, Georgia and other countries in its former sphere of influence.

China “opposes external intervention in Venezuela,” Foreign Ministry spokeswoman Hua Chunying said. “We hope that Venezuela and the United States can respect and treat each other on an equal footing, and deal with their relations based on non-interference in each other’s internal affairs.”

In the last decade, China has given Venezuela $65 billion in loans, cash and investment. Venezuela owes it more than $20 billion. China’s only hope of being repaid appears to lie in Venezuela ramping up oil production, although low oil prices and the country’s crashing economy appear to bode poorly for such an outcome.

The Russian state-controlled oil company Rosneft has invested heavily in Venezuela, and its chief executive, Igor Sechin, visited Caracas in November, pressuring the Maduro government to make good on its commitments to his company. Russia, a major oil producer itself, has been buying oil from the state-run Venezuelan company PDVSA, and Sechin reportedly went to Caracas to raise concerns about Venezuela halting oil supplies.

Russia is estimated to have poured in at least $17 billion in Venezuela in loans and investment since Maduro’s populist predecessor, Hugo Chavez, came to power in 1999. The Economic Development Ministry said Russia has invested around $4 billion in Venezuela, mostly in joint oil projects.

Asked if Russia would be willing to grant asylum to Maduro, the Kremlin spokesman Peskov refused to speculate and insisted that Moscow views Maduro as the only legitimate leader. Maduro visited Moscow in early December, seeking political and economic assistance as Venezuela has faced sky-high inflation and food shortages.

For Iran, its relationship with Venezuela hinges on their mutual enmity toward the U.S.

Chavez traveled to Iran in 2006 and received the country’s Islamic Republic Medal, its highest award, from hard-line President Mahmoud Ahmadinejad, who called Chavez a “brother and a trench mate.” Chavez vowed Venezuela would “stay by Iran at any time and under any condition.” Both leaders faced criticism from then-U.S. President George W. Bush and offered their own withering criticism of him.

After Maduro took power upon Chavez’s death in 2013, Iran has maintained its support of Venezuela. On Thursday, Iran’s Foreign Ministry spokesman Bahram Ghasemi criticized the U.S. and other countries over meddling in Venezuela.

“The Islamic Republic of Iran supports the government and people of Venezuela against any foreign intervention in the internal affairs of Venezuela or any other illegitimate and illegal measure such as a coup d’etat,” Ghasemi said.

Strong endorsement for the current Venezuelan government also came from Turkey, where President Recep Tayyip Erdogan sent a message of support: “My brother Maduro! Stay strong, we are by your side.”

Turkey also has cultivated close economic and political ties with Maduro. During a visit to Venezuela in December, Erdogan blamed U.S. sanctions for the country’s economic hardships.

Syria also came to the defense of Maduro’s government.

Damascus reaffirmed its “full solidarity with the leadership and people of the Venezuelan Republic in preserving the country’s sovereignty and foiling the American administration’s hostile plans,” the Syrian Foreign Ministry said.

Cuba’s Foreign Ministry said Havana “expresses its unwavering solidarity” with the Maduro government. Cuba has sent its closest ally tens of thousands of workers, from doctors to intelligence officials, and in return has received tens of thousands of barrels a day in heavily subsidized oil.