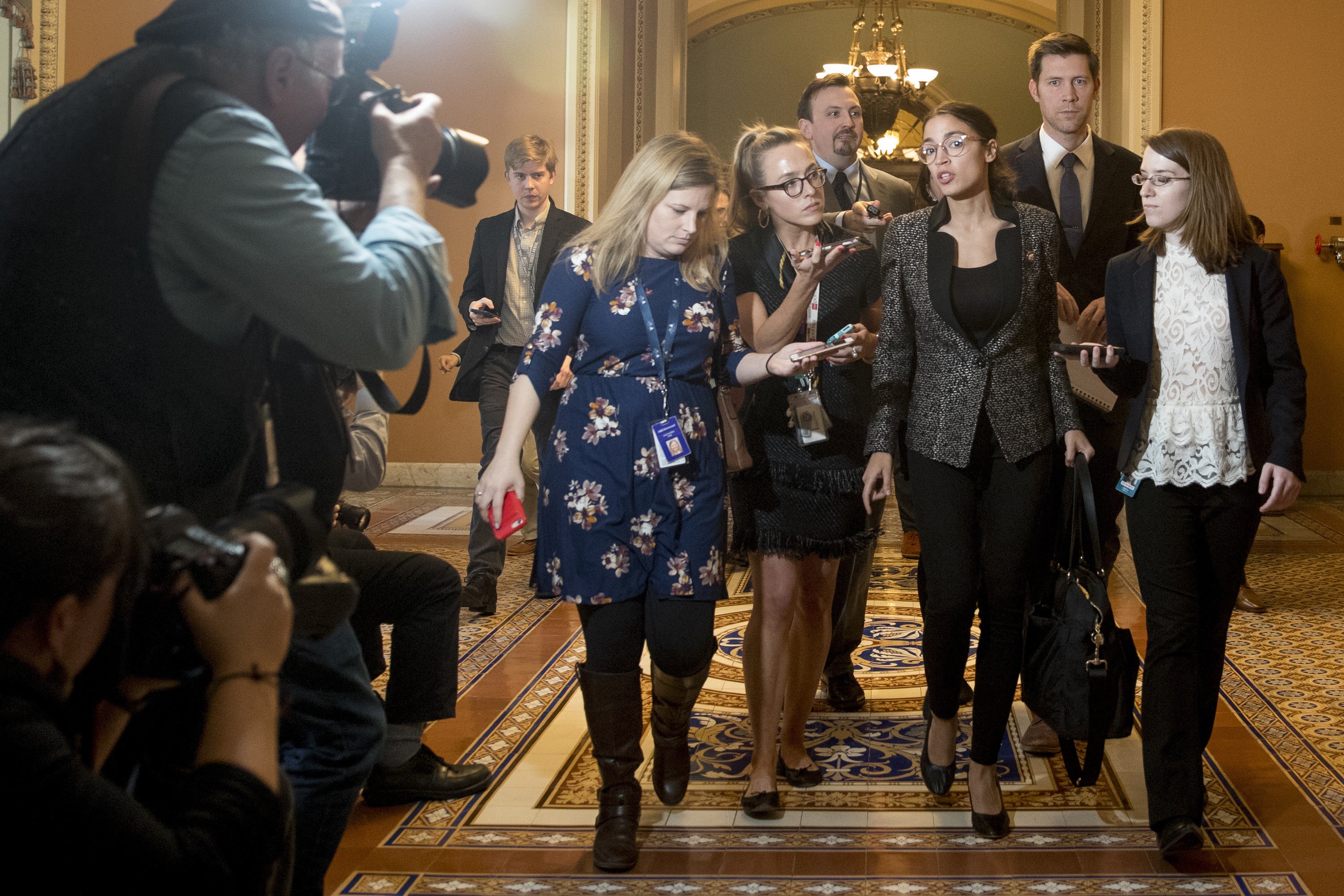 WASHINGTON — A splintered Senate voted down competing Democratic and Republican plans for ending the 35-day partial government shutdown, but the twin setbacks prompted a burst of bipartisan talks aimed at temporarily halting the longest-ever closure of federal agencies and the damage it’s inflicting around the country.

In the first serious exchange in weeks, Senate Majority Leader Mitch McConnell, R-Ky., quickly called Minority Leader Chuck Schumer, D-N.Y., to his office Thursday to explore potential next steps for solving the vitriolic stalemate. Senators from both sides floated a plan to reopen agencies for three weeks and pay hundreds of thousands of beleaguered federal workers while bargainers hunt for a deal.

At the White House, President Donald Trump told reporters he’d support “a reasonable agreement.” He suggested he’d also want a “prorated down payment” for his long-sought border wall with Mexico but didn’t describe the term. He said he has “other alternatives” for getting wall funding, an apparent reference to his disputed claim that he could declare a national emergency and fund the wall’s construction using other programs in the federal budget.

“At least we’re talking about it. That’s better than it was before,” McConnell told reporters in one of the most encouraging statements heard since the shutdown began Dec. 22.

Even so, it was unclear whether the flurry would produce results.

House Speaker Nancy Pelosi, D-Calif., whose relationship with Trump seems to sour daily, told reporters a “big” down payment would not be “a reasonable agreement.” Asked if she knew how much money Trump meant, Pelosi said, “I don’t know if he knows what he’s talking about.”

Schumer spokesman Justin Goodman said Democrats have made clear “that they will not support funding for the wall, prorated or otherwise.”

Contributing to the pressure on lawmakers to find a solution was the harsh reality confronting 800,000 federal workers, who on Friday face a second two-week payday with no paychecks.

Underscoring the strains, Sen. Michael Bennet, D-Colo., angrily said on the Senate floor that Sen. Ted Cruz, R-Texas, had forced a 2013 shutdown during which “people were killed” in Colorado from flooding and shuttered federal agencies couldn’t help local emergency workers. Moments earlier, Cruz accused Democrats of blocking a separate, doomed bill to pay Coast Guard personnel during this shutdown to score political points, adding later, “Just because you hate somebody doesn’t mean you should shut the government down.”

Thursday’s votes came after Vice President Mike Pence lunched privately with GOP senators, who told him they were itching for the standoff to end, participants said. Sen. Roy Blunt, R-Mo., said their message to Pence was, “Find a way forward.”

In an embarrassment to Trump, the Democratic proposal got two more votes Thursday than the GOP plan, even though Republicans control the chamber 53-47. Six Republicans backed the Democratic plan, including freshman Sen. Mitt Romney, R-Utah, who’s clashed periodically with the president.

The Senate first rejected a Republican plan reopening the government through September and giving Trump the $5.7 billion he’s demanded for building segments of that wall, a project that he’d long promised Mexico would finance. The 50-47 vote for the measure fell 10 shy of the 60 votes needed to succeed.

Minutes later, senators voted 52-44 for a Democratic alternative that sought to open padlocked agencies through Feb. 8 with no wall money. That was eight votes short. It was aimed at giving bargainers time to seek an accord while getting paychecks to government workers who are either working wihout pay or being forced to stay home.

Flustered lawmakers said Thursday’s roll calls could be a reality check that would prod the start of talks. Throughout, the two sides have issued mutually exclusive demands that have blocked negotiations from even starting: Trump has refused to reopen government until Congress gives him the wall money, and congressional Democrats have rejected bargaining until he reopens government.

Thursday’s votes could “teach us that the leaders are going to have to get together and figure out how to resolve this,” said Sen. John Thune of South Dakota, the No. 2 Senate GOP leader. He added, “One way or another we’ve got to get out of this. This is no win for anybody.”

Pelosi accused Commerce Secretary Wilbur Ross of a ”‘Let them eat cake’ kind of attitude” after he said on television that he didn’t understand why unpaid civil servants were resorting to homeless shelters for food. Even as Pelosi offered to meet the president “anytime,” Trump stood firm, tweeting, “Without a Wall it all doesn’t work…. We will not Cave!”

As the Senate debated the two dueling proposals, McConnell said the Democratic plan would let that party’s lawmakers “make political points and nothing else” because Trump wouldn’t sign it. He called Pelosi’s opposition “unreasonable” and said, “Senate Democrats are not obligated to go down with her ship.”

Schumer criticized the GOP plan for endorsing Trump’s proposal to keep the government closed until he gets what he wants.

McConnell’s engagement was viewed as a constructive sign because he has a history of helping resolve partisan standoffs. For weeks, he’d let Trump and Democrats try reaching an accord and, until Thursday, had barred any votes on legislation Trump would not sign.

In consultation with their Senate counterparts, House Democrats were preparing a new border security package that might be rolled out Friday. Despite their pledge to not negotiate until agencies reopened, their forthcoming proposal was essentially a counteroffer to Trump. Pelosi expressed “some optimism that things could break loose pretty soon” in a closed-door meeting with other Democrats on Wednesday evening, said Rep. John Yarmuth, D-Ky.

The Democratic package was expected to include $5.7 billion, the same amount Trump wants for his wall, but it would be used instead for fencing, technology, personnel and other measures. In a plan the rejected Senate GOP plan mirrored, Trump on Saturday proposed to reopen government if he got his wall money. He also proposed to revamp immigration laws, including new restrictions on Central American minors seeking asylum in the U.S. and temporary protections for immigrants who entered the country illegally as children.

At a panel discussion held by House Democrats on the effects of the shutdown, union leaders and former Homeland Security officials said they worried about the long-term effects.

“We will be lucky to get everybody back on the job without a crisis to respond to,” said Tim Manning, a former Federal Emergency Management Agency official.